Harrisburg, Pa. – A federal appeals court grilled lawyers Tuesday about whether Penn State’s former president deserved to have his misdemeanor child endangerment conviction, related to his response to a complaint about Jerry Sandusky, overturned last year.

The 3rd U.S. Circuit Court of Appeals focused on whether Graham Spanier was wrongly convicted under a 2007 law for acts that occurred in 2001. The three judges did not say when they might rule. 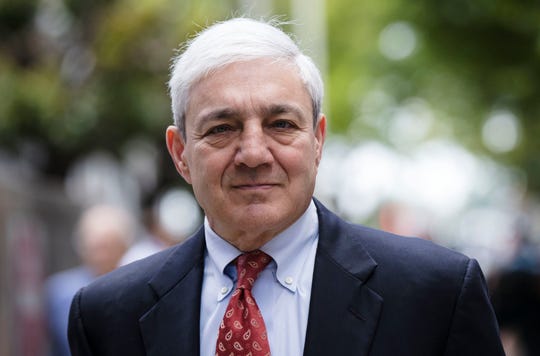 Spanier’s attorneys say the 2007 version expanded the child endangerment law to apply to those who employ or supervise underlings, while the attorney general’s office said it simply put into words and clarified what already was the law – and that he was prosecuted under the 1995 version.

“This jury was never told, never, that it could convict the defendant solely on the basis that he supervised other people that were supervising the welfare of children,” argued Ronald Eisenberg for the attorney general’s office.

The judges are reviewing a decision by U.S. Magistrate Judge Karoline Mehalchick in April 2019 that Spanier was improperly convicted under the 2007 version. She gave prosecutors three months to retry him.

In early 2001, two of Spanier’s top lieutenants notified him about a report from an assistant football coach that he was highly disturbed by seeing retired football team defensive coach Sandusky alone and naked in a team shower with a boy. The police were not called.

“Spanier submits that this retroactive application is unreasonable and far more extensive than anyone in 2001 would have been able to reasonably foresee,” Mehalchick wrote. “The court agrees.”

Her decision came less than a day before Spanier had been due to report to jail to start serving a minimum sentence of two months with work release, followed by two months of house arrest.

Spanier, 71, was forced out as university president shortly after Sandusky was arrested in 2011 on child molestation charges. A year later, Spanier was himself charged in an alleged criminal cover-up, although many of those charges were subsequently dismissed by a state appeals court.

The jury acquitted him of what remained by the time of his trial, except for the single count of child endangerment.

“Why shouldn’t we be concerned with the jury instruction that was given, which mirrored the 2007 language?” asked 3rd Circuit Judge Mike Fisher on Tuesday. “Because how do we know that the jury didn’t find Dr. Spanier guilty because of the language that was added in 2007 rather than the original language?”

Spanier attorney Bruce Merenstein said the 2007 changes broadened the law to provide for “liability, criminal liability, against people who were not covered before 2007.″

Then-graduate assistant Mike McQueary, prosecutors wrote in a recent brief, said he heard “a rhythmic, slapping sound. Glancing in a mirror he saw a naked boy, 10 or 12 years old, and also a naked man – Sandusky. He was pressed up behind the boy, stomach to back, skin to skin.”

Spanier has said the incident, whose victim has not been conclusively identified, was characterized to him as horseplay.

Spanier wrote in a 2001 email to his vice president and athletic director that “the only downside for us is if the message isn’t ‘heard’ and acted upon, and we then become vulnerable for not having reported it.”

Spanier did not testify at his trial and told the judge at sentencing that he regretted not intervening more forcefully.

He remains a tenured professor of human development and family studies, sociology, demography and family and community medicine. He is on administrative leave from Penn State and has not taught any classes since the scandal broke nine years ago.

Sandusky is serving a lengthy state prison sentence and maintains he was wrongly convicted of the sexual abuse of 10 boys.