Miller is one of the best and most entertaining players in the country. He ran for 1,068 yards, passed for 2,094 and accounted for 36 touchdowns. He was a legitimate Heisman Trophy contender. In the statement released by Ohio State making the news official, he said he wants to return to Columbus for another season. 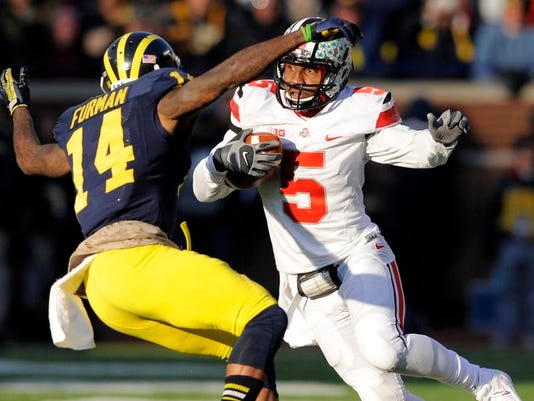 This is bigger than the Buckeyes.

Ohio State quarterback Braxton Miller is done for the season because of a shoulder injury. The senior needs surgery to repair a torn labrum.

It’s a crushing blow on a few levels:

■Miller is one of the best and most entertaining players in the country. He ran for 1,068 yards, passed for 2,094 and accounted for 36 touchdowns. He was a legitimate Heisman Trophy contender. In the statement released by Ohio State making the news official, he said he wants to return to Columbus for another season.

“I am on course to graduate in December and I want to attend graduate school, and then return to lead the Buckeyes next season. In the meantime, I want to give all the support I can to my coaches and teammates as they chase a championship this season,” he said.

It’s a nice sentiment, but after two surgeries on his shoulder in less than a year Miller’s future as a quarterback at any level is in doubt. And that’s unfortunate.

■For No. 5 Ohio State, a season that had championship hopes — both Big Ten and national — will now begin with a very different feel. The Buckeyes are still conference contenders, though it could be argued they have now ceded the role of Big Ten favorites to Michigan State. Maybe.

Urban Meyer and his staff recruit better than any program in the Big Ten. No roster in the conference has more talent. Of course, it didn’t help the Buckeyes win the Big Ten last season.

Miller’s injury makes the Buckeyes’ prospects more uncertain. His presumptive replacement is redshirt freshman J.T. Barrett, a former four-star recruit. Ohio State was already entering the season with a rebuilt offensive line, looking for a No. 1 tailback to emerge, and trying to fix a defense that melted down late last season. And even with all that, a Big Ten championship doesn’t seem out of reach.

The national championship? That’s a very different story, and not just for the Buckeyes, but the whole Big Ten.

■At least one of the Big Five conferences has to be left out of the College Football Playoff’s final four. The Buckeyes were the conference’s best bet to get through the regular season unbeaten. Now that’s much tougher. A weakened Ohio State also has a trickledown effect to the rest of the conference. Beating the Buckeyes becomes less impressive.

The Big Ten needs a dominant team to emerge from a conference that has been a cut below the Southeastern Conference and Pac-12 in recent years. Maybe No. 8 Michigan State is that team. A victory at No. 3 Oregon would certainly go a long way toward boosting the Spartans’ and the Big Ten’s credentials.

With Miller gone, the Big Ten could be in a serious bind if the Spartans don’t come through in Eugene on Sept. 6.