Cornhuskers hang on vs. Southern Miss

Nebraska’s Drew Brown tied an NCAA record with five field goals in the first half.

Cornhuskers hang on vs. Southern Miss 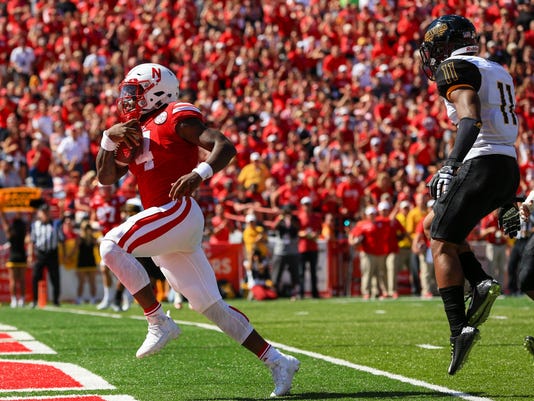 Lincoln, Neb. – — Nebraska has lost one game on a Hail Mary and another in overtime after it made a huge comeback. Now here was Southern Mississippi moving down the field in the last minute with a chance to tie after Nebraska had blown most of a 22-point lead in the fourth quarter.

During an afternoon when the Huskers and Golden Eagles combined for almost 1,100 yards of offense, it was defensive end Freedom Akinmoladun who secured victory for Nebraska, sacking Nick Mullens near midfield to end the game.

Tommy Armstrong passed for 368 yards and two touchdowns in his duel with Mullens, who threw for a career-high 447 yards.

“I’m happy we got a win, but I’m not satisfied at all,” Armstrong said. “We could have put up a lot more points on the board. We’re probably 30-45 seconds from going into overtime, and then who knows what?”

Nebraska’s Drew Brown tied an NCAA record with five field goals in the first half and Jordan Westerkamp had a career day with 11 catches for 118 yards. The Huskers (2-2) also got an unexpected lift from fullback Andy Janovich, who ran for 68 yards on his first five carries since 2012 and had a 53-yard catch-and-run.

Southern Miss (2-2) stayed within striking distance after entering the fourth quarter down 22 points. Mullens and Casey Martin teamed up for two touchdowns, and Jalen Richard’s 1-yard run pulled the Eagles to 36-28 with 6:55 left.

“I thought we gave it all we got,” Mullens said. “Everything we had, we left it out on the field. It was a resilient group of men trying to make plays and win the game, probably one of the funnest games I’ve ever played.”

Brown could have put the game out of reach with a sixth field goal with 29 seconds left, but his 24-yard try was tipped, giving Southern Miss a final opportunity to tie. Two Mullens-to-Martin passes got the Eagles to the Nebraska 40, but Akinmoladun crashed through to sack Mullens, and the Eagles couldn’t stop the clock.

“We needed a play,” Akinmoladun said. “I didn’t know at the time what it was going to be, but someone needed to step up. I was given the opportunity to step up.”

Nebraska missed opportunities to put away the Golden Eagles early, settling for field goals after failing to convert third downs on four straight trips inside the 20.

“We did a nice job of holding them out of the end zone and making them kick field goals,” Southern Miss coach Todd Monken said. “They gave us a chance, but in the end we gave up too many explosive plays. We’ll regroup, look at it and get better. They’re a good offensive team. They’re going to score points.”

Armstrong passed 10 yards to Taariq Allen for a touchdown to put the Huskers up 29-7 late in the third quarter. Then it was game on.

Mullens and Martin connected for a 21-yard touchdown, Xavier Thigpen recovered the onside kick and Martin turned a short pass into a 19-yard TD on fourth-and-4 to make it 29-21.

The Eagles failed to convert on a fake punt from their 39 on their next possession, and Armstrong ran in from 16 yards untouched four plays later.

Southern Miss kept coming, driving to the Nebraska 14. Joshua Kalu intercepted Mullens in the end zone on a fourth-and-13, but he was flagged for interference and unsportsmanlike conduct after spiking the ball. That set up the Eagles at the 1, and Richard scored on the next play.

The last of Brown’s five first-half field goals was a career-long 50-yarder as time ran out to give the Huskers a 22-0 lead.

The Huskers, who had lost two of their first three games for the first time since 1981, avoided their first 1-3 start since 1957.

“We have to be pleased with winning the game,” Riley said. “We’ve won a couple games and we’ve lost a couple real close games. Now we’re entering the conference, and we’ve been through a lot of situations. Stack your experiences up and hope you get better.”