Minnesota head coach Tracy Claeys, center, celebrates with the trophy and his players after their 21-14 win over Central Michigan in the Quick Lane Bowl at Ford Field, December 28, 2015. David Guralnick / Detroit News
Fullscreen

Central Michigan head coach John Bonamego leads his team onto the field for the start of the game. David Guralnick / Detroit News
Fullscreen 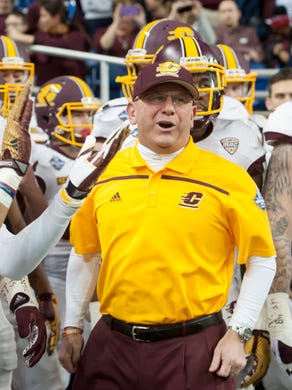 The Hamilton Tiger-Cats took Mark Chapman with the first pick after a season in which he led the Chippewas in receiving yards (805) and receptions (54). He also was tied for second on the team with five touchdowns. David Guralnick / Detroit News
Fullscreen

Central Michigan running back Romello Ross is mobbed after running the ball in for a touchdown in the fourth quarter. David Guralnick / Detroit News
Fullscreen

Minnesota wide receiver KJ Maye and the rest of the Golden Gophers celebrate with the fans after the game. David Guralnick / Detroit News
Fullscreen

Detroit — Mitch Leidner threw for a touchdown and scored on a 13-yard run with 4:26 left for the difference in Minnesota's 21-14 victory over Central Michigan Monday night in the Quick Lane Bowl at Ford Field.

Things looked dim for the Gophers (6-7) after Central Michigan true freshman running back Romello Ross (Detroit Western) gave the Chippewas (7-6) a 14-13 lead with 11:08 remaining, scoring on a 13-yard run while carrying multiple defenders with him into the end zone.

But Leidner wouldn't leave Ford Field without the Quick Lane championship trophy, along with the MVP award. He led the Gophers on a 13-play, 74-yard drive, running for seven yards to the CMU 20 on a third-and-three play, then scoring on the 13-yard run. He also completed 6 of 7 passes during the drive for 40 yards.

"We've been in that situation before and that was going through my head," said Leidner, who completed 24 of 30 passes for 223 yards, including an 11-yard TD toss to KJ Maye for a 10-7 lead early in the second quarter. "I trust my offensive linemen and receivers to do the job so we could come out on top. This is huge for our program, to send our seniors off in the right way, just very exciting."

Still, the Chippewas had a chance to pull even or earn the win in the final minutes. Junior quarterback Cooper Rush, a third-year starter who was trying to become the seventh quarterback in Mid-American Conference history to throw for 4,000 yards in a season, was intercepted by Brian Boddy-Calhoun at the Minnesota 42 with 2:10 left.

Rush had completed three passes to move the Chippewas from their own 25 to Minnesota's 45 before the turnover.

"One thing I know is one moment I was sticking to my man and the next I'm looking back and I have the ball in my hand, so it was a pleasure," said Boddy-Calhoun, who was covering Anthony Rice, who was behind him. But Rush had trouble getting the ball to Rice with linebacker Julian Huff grabbing his leg.

Minnesota's secondary played well against Rush and his five receivers who entered the game with 500 or more receiving yards. The Gophers gave them little room to operate, then little room to roam after a catch.

Rush, who entered the night with a CMU-record 3,703 passing yards, was limited to 10-of-22 passing for 69 yards through three quarters. He finished just 15-of-30 for 145 yards and was sacked by De'Vondre Campbell at the Chippewas' 25 on the game's final play.

"We just came out here with a lot of energy," Boddy-Calhoun said. "Throughout the week we had a great job of scheming it up with the coaches and things worked out well."

"Just not enough at the end, few too many mistakes," Bonamego said. "We feel like we were right there and had the opportunities to win the game, but just didn't get it done.

"I think it's pretty well-documented that they have a very good secondary and I think that was the strength of their defense. I thought that we moved the ball against them well, just stalled a few drives, got into some long-yardage situations. They probably played us a lot more press coverage than they had shown going into the game. That's probably the one thing I'd say they gave us that we weren't expecting."

Minnesota interim offensive coordinator Rob Reeves talked of the importance of establishing the running game early and the Gophers did just that. Rodney Smith busted loose for a 37-yard run on the first play from scrimmage, leading to a 22-yard field goal by Ryan Santoso.

It could have been more, but Leidner's perfectly thrown deep ball went through the hands of Drew Wolitarsky on the first play of the Gophers' second drive.

After CMU took a 7-3 lead on Rush's 1-yard TD run on the first play of the second quarter, the Gophers came back with Shannon Brooks running for 30 yards to set up Leidner's 11-yard TD pass to Maye, who grabbed the ball right between two defenders in the end zone.

CMU had its chances.

First, cornerback Josh Cox intercepted a Leidner pass at the Minnesota 46 with 5:40 left in the half, but Rush threw three straight incompletions, the final one leading to an intentional grounding call.

Later, the Chippewas had the ball at midfield following a failed onside kick by the Gophers after Santoso's 42-yard field goal gave them a 13-7 lead.

Rush completed three passes, one for a first down at the 38, but his next two completions were for no gain and the Chippewas were forced to punt.

In the end, Rush was still talking about his fourth-quarter interception.

Ross was a bright spot for the Chippewas, rushing for 100 yards on 19 carries.

Minnesota had 381 total yards, including 158 on the ground.