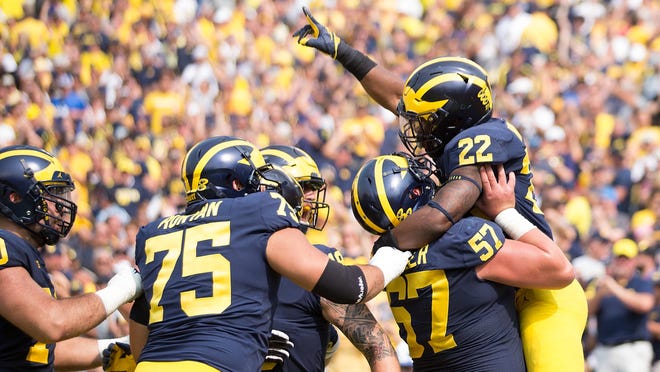 As most Big Ten teams have wrapped up non-conference play, we’re getting a decent idea of how the teams are stacking up.

Right now, Penn State and Wisconsin look like the division favorites, however, that’s far from a sure thing when you consider both have feasted on — for the most part — inferior competition. But give the Nittany Lions and Badgers credit, they’ve taken care of business and have looked good doing it.

The rest of the contenders haven’t quite played to that level and in the East especially, I’m not counting out Ohio State or Michigan while there are some surprise teams, as well. Iowa looks good behind sophomore quarterback Nathan Stanley and Purdue has come out of nowhere to win two of three under first-year coach Jeff Brohm. Over in the East, Maryland opened with a big win at Texas and Michigan State has been solid, albeit against Mid-American Conference foes.

But not all the surprises have been positive.

Northwestern — a pick by some seemingly misguided reporters to win the West — struggled in the opener against Nevada then got smoked by Duke before bouncing back against Bowling Green.

The clear-cut biggest mess, however, is with Nebraska.

Three games in for the Cornhuskers and none have been positive. Sure, they won the opener but nearly collapsed late against Arkansas State. A week later they went to Oregon and gave up 42 first-half points and capped off non-conference play by losing at home to Northern Illinois.

Now, Northern Illinois has been a solid team and had gone to eight straight bowl games before last season. But the Huskies are in a rebuilding mode and still beat Nebraska — in Lincoln.

“It makes you sick,” Nebraska linebacker Luke Gifford told the Omaha World-Herald. “You go in that locker room afterwards and it sucks. No one likes losing, that’s for sure. So we are going to just keep working. We still have a lot of things ahead of us.”

What exactly they have ahead of them is easy to see on the schedule — a manageable start to conference play before things get really tough — but not as easy to see off the field and very far into the future.

Athletic director Shawn Eichorst, not exactly a guy who goes out of his way to talk to the media, addressed them after the game and offered his support for coach Mike Riley

“I’m frustrated, I’m angry, I’m disappointed,” he told Lee Barfknecht of the World-Herald. “It’s not acceptable. I’m supportive, but we have just got to play better.”

The bad part for Eichorst is he’s connected to the whole thing, the one who hired Riley, a coach with just a .538 winning percentage in his 14 total years at Oregon State. He’s the one who quietly gave Riley an extension after going 15-11 in this first two seasons at Nebraska.

It all must be very frustrating for a Nebraska fan base that remembers its championship past but might be starting to realize those days are gone.

“This will sound like an understatement,” Riley said, “but we are just really, bitterly disappointed.”

The fan base definitely seems to feel the same, but with a smattering of boos amongst those who didn’t leave Memorial Stadium early on Saturday, the concern is they see the reality, too. The mid- to late-1990s feel like a long time ago, an era when Tom Osborne had the Huskers among the nation’s elite.

Now, they’d probably be happy just to compete in the Big Ten West, something that looks far less likely with each game played.

As bad as things are at Nebraska, the feeling around the Purdue program has to be as confident as it’s been since the days of Drew Brees and Joe Tiller.

Over the previous four seasons, the Boilermakers managed just nine victories and it took coach Darrell Hazell into the second season to get his second win. Three weeks into his tenure as the Purdue coach, Brohm already has two wins.

And the second one was pretty impressive as the Boilermakers went on the road and destroyed Missouri, 35-3.

“I think it’s a huge win,” Brohm said. “An SEC team on the road in this fashion, I couldn’t be prouder. I knew we had a chance to win; I didn’t think we would win in this dominant of a fashion.”

Maybe he didn’t think so, but the Boilermakers gave everyone an idea things would be different in Week 1 when they nearly pulled off the upset against Louisville then came back and ran over Ohio to get win No. 1.

The second one has ramped up the excitement level in West Lafayette.

“I hope what Purdue football is right now is a team people want to show up and watch, that they can support and be behind and have some momentum we haven’t had in a while,” said quarterback David Blough, who was 22-for-28 for 187 yards and a touchdown.

Being relevant is a big step for a team that won back-to-back games for the first time since 2012. And as good as they’re feeling, it’s about to really get tough with Michigan coming to town to open Big Ten play. But the confidence is there, and that’s saying something.

“I think the first game of the season gave us confidence,” Brohm said. “At halftime (against Louisville), we came in there and you thought our guys had won the game already. They were excited. They felt good about themselves.”

Some other quick thoughts from around the Big Ten:

■ Three more touchdowns for Ohio State’s J.T. Barrett gives him 107 for his career, more than any other player in the Big Ten. He catches a lot of heat, but it’s hard to argue with his production.

■ Wisconsin has rolled in the non-conference and while BYU might not be as good this season, a win like Saturday’s 40-6 victory in Provo, Utah, is pretty impressive.

■ Anyone convinced Minnesota’s 3-0 mark means P.J. Fleck could have a big first season? I’m not, yet. Hosting Maryland after getting a bye will be a game to watch.