Saturday's Big Ten: No. 6 Wisconsin falls in day of upsets

BYU handed mistake-prone Wisconsin its first nonconference home loss since 2003, giving the No. 6 Badgers fits with its motion offense in a 24-21 victory.

Saturday's Big Ten: No. 6 Wisconsin falls in day of upsets 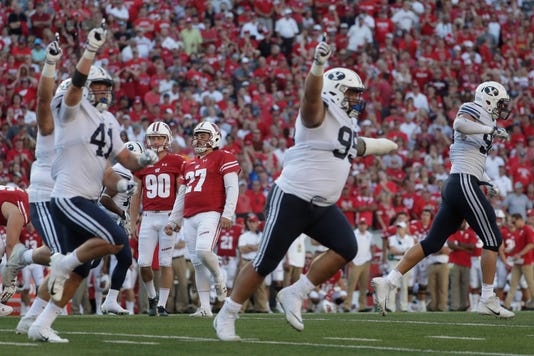 The Cougars followed the plan to perfection Saturday at Camp Randall Stadium.

Squally Canada ran for 118 yards and two touchdowns and BYU handed mistake-prone Wisconsin its first nonconference home loss since 2003 with a 24-21 victory.

Sitake was so happy with the toughness of his team that he gave the game ball to his strength and conditioning coaches.

“I talked about how much I admire the (Wisconsin) program, the tradition and the smashmouth football that they play,” Sitake said. “But (BYU’s) players were gritty and they played hard and with a lot of toughness.”

Wisconsin (2-1) had one last chance to avoid an upset with a drive that started with 3:55 left at the 8. But normally reliable senior kicker Rafael Gaglianone’s 42-yard field goal attempt to tie with 41 seconds left went wide left .

“BYU! BYU!” yelled the small contingent of Cougars fans in the stands. BYU’s last victory over a top-10 team came in 2009 with a 14-13 win over third-ranked Oklahoma.

“We just wanted to win the line of scrimmage and be physical,” Sitake said.

The Badgers’ 41-game nonconference winning streak — the longest active in the nation — came to an end. Their hopes to make the College Football Playoff probably did, too.

“Win as a team and everyone can own their part equally in a loss,” Wisconsin coach Paul Chryst said.

The Cougars punched right back after Wisconsin tied the game at 21 on Taiwan Deal’s 5-yard touchdown run with 12:43 to go.

(At) No. 11 Penn State 63, Kent State 10: Trace McSorley accounted for five touchdowns and broke Penn State’s record for most rushing scores by a quarterback for Penn State.

The Heisman Trophy hopeful completed 11 of 22 passes for 229 yards with an interception and ran for three touchdowns for the Nittany Lions (3-0), who led 28-10 at halftime. McSorley surpassed Daryll Clark’s 22 rushing scores and leads the program with 24.

DeAndre Thompkins caught four passes for 101 yards and hauled in 40-yard touchdown pass to begin the rout for Penn State. Miles Sanders rushed for 86 yards on 14 carries while McSorley scored on runs of one, two and 13 yards. McSorley threw a 41-yard touchdown pass to Brandon Polk with 2:37 to play in the third quarter before yielding his spot to backup Sean Clifford.

Woody Barrett completed 20 of 38 passes with 176 yards and threw a touchdown pass to Mike Carrigan for the Golden Flashes (1-2). Matthew Trickett added a field goal.

Nelson was 17 for 28 for 277 yards and added 37 yards rushing. Kwadarrius Smith had six receptions for 90 yards and Andrew Williams had 85 yards on three catches for Akron (2-0).

Clayton Thorson completed 33 of 52 passes for a career-high 383 yards with three TDs for Northwestern (1-2), but threw two interceptions and lost a fumble on a strip-sack in the second half that resulted in Akron scores.

(At) Indiana 38, Ball State 10: Stevie Scott ran for 114 yards and two touchdowns while Peyton Ramsey and Ronnie Walker Jr. each added another score to help Indiana blow out Ball State.

The Hoosiers are 3-0 for only the second time in a decade and now own a six-game regular-season winning streak against non-conference foes.

The Cardinals (1-2) have lost five straight to Big Ten opponents and fell to an in-state foe for the second consecutive week.

Ramsey was 20 of 27 with 173 yards and ran six times for 43 yards including a 5-yard scoring run with 22 seconds left in the first half. He did not play much in the second half.

(At) Iowa 38, Northern Iowa 14: Noah Fant caught five passes for 99 yards and one touchdown, moving him atop the all-time list for tight end touchdowns at Iowa to help power the Hawkeyes to a dominant victory.

Nathan Stanley had a mostly-flawless game, throwing for 309 yards, two touchdown passes and an interception on 23-of-28 passing for Iowa (3-0), which matched its 3-0 start from a year ago headed into Big Ten Conference play.

The Hawkeyes also got a third-straight stalwart defensive effort, holding the Panthers (0-2) to 20 total yards and minus-2 yards rushing in the first half and finished by allowing six yards rushing and 228 total yards to their neighbors from the north after the Panthers put together a pair of late-game scoring drives against Hawkeye backups.

Turnovers plagued the Scarlet Knights from the start as Torneden jumped in front of an Artur Sitkowski pass on Rutgers’ second drive and returned it 39 yards for the score. Torneden was there again the next time out, recovering a fumble by Jonathan Hilliman that set up a field goal.

True freshman Pooka Williams was the star on offense, the anchor of an strong ground game for Kansas that rushed for 400 yards and scored four times. Finishing with 158 yards, including a 52-yard touchdown run, Williams has 283 yards and three touchdowns in his first two college games.

Special teams was one of few bright spots for Rutgers, as Deonte Roberts blocked a Kansas field goal try in the first quarter and took it 64 yards for the touchdown. The Scarlet Knights blocked another field goal later in the quarter, but didn’t get any points out of it.

Sitkowski finished the game with just 47 yards and three interceptions before being replaced by Gio Rescigno in the third quarter. Raheem Blackshear led Rutgers in rushing with 102 yards, and Hilliman added a score on the ground as well.

Annexstad completed 12 of 20 throws for 142 yards in his third collegiate start and was resting on the sideline by the third quarter. Williams had 33 rushes for 141 yards as featured back in place of Rodney Smith, who suffered a season-ending knee injury last week against Fresno State.

With fellow true freshman Annexstad under center, Williams and the young Gophers (3-0) looked the more-seasoned squad against older-but-injured Miami. The RedHawks (0-3) lost three offensive starters in the first half, including leading receivers Kenny Young and James Gardner.

With the RedHawks again struggling to run — they had 91 rushing yards and still haven’t broken 100 yards on the ground this year — the Gophers steadily moved the ball and wore down Miami’s defense on a steamy 90-degree afternoon.

Missouri (3-0) is off to its best start since 2015 while Purdue (0-3) faces its worst beginning of the season since 1996 when they last opened with three losses.

The Tigers turned to often McCann often to help stay ahead of the Boilermakers. McCann was 4 of 5 on field goals, including the game-winner from 25 yards.

Drew Lock finished 26-of-43 passing for 375 yards with three touchdowns and an interception for Missouri. He ran for negative-10 yards and a TD.

David Blough was 39-of-55 passing and had a career-high and program record 572 yards passing for the Boilermakers. He threw three touchdown passes and an interception, and ran for 18 yards on six carries with a touchdown.

Temple 35, (at) Maryland 14: Temple stuffed Maryland’s potent offense, Anthony Russo threw for 228 yards and the Owls pulled off an upset for their first victory of the season.

Ryquell Armstead rushed for 118 yards to help Temple (1-2) bounce back from losses at home to Villanova and Buffalo. The Owls took a 28-7 lead early in the third quarter and cruised to the finish as a 16-point underdog.

Maryland (2-1) was striving to stay unbeaten under interim coach Matt Canada, who also serves as offensive coordinator. The Terrapins were averaging 39.5 points and 486 yards per game after rolling past Texas and Bowling Green, but nothing seemed to work against Temple.

Maryland totaled 195 yards, made only 11 first downs and got its touchdowns on an interception return and a blocked punt.

Starting quarterback Kasim Hill went 7 for 17 for 56 yards, Tyrrell Pigrome was 1 for 4 for 7 yards and both threw an interception.

Troy 24, (at) Nebraska 19: B.J. Smith scored on a 26-yard run midway through the fourth quarter and Will Sunderland made an interception in the final 3 minutes, giving Troy the cushion it needed to beat Nebraska and denying new Cornhuskers coach Scott Frost his first win.

The Huskers (0-2) have lost their first two games for the first time since 1957 and have dropped six straight home games since beating Rutgers Sept. 23, 2017.

The Trojans (2-1) of the Sun Belt Conference took down a Power Five conference opponent for the second straight year. Last year they won at then-No. 25 LSU.

Sophomore walk-on Andrew Bunch, starting at quarterback for Nebraska in place of the injured Adrian Martinez, converted a fourth-and-8 while leading the Huskers on a 75-yard drive to pull Nebraska to 24-19 with 2:55 left.

But Sunderland stepped in front of his pass along the sideline intended for JD Spielman, starting the celebration on the Troy bench.

Barnett was 23 of 40 for 411 yards passing with two touchdowns and two interceptions, and Jordan Cronkrite ran for 136 yards and a score for the Bulls (3-0).

The Illini couldn’t score on its final drive thanks to a sack by Tyrone Barber at the South Florida 25 with six seconds left. Freshman quarterback M.J. Rivers II threw the ball out of the end zone as time expired.

Illinois played a home game at Soldier Field for the fourth time in school history. The game attracted a small crowd with empty seats in the west side upper level.