Michigan, after just getting past Northwestern 20-17, dropped one spot to No. 15 in this week’s Associated Press college football poll, released Sunday. Meanwhile, Michigan State, which thumped Central Michigan, 31-20, improved one spot to No. 20 in the AP poll. 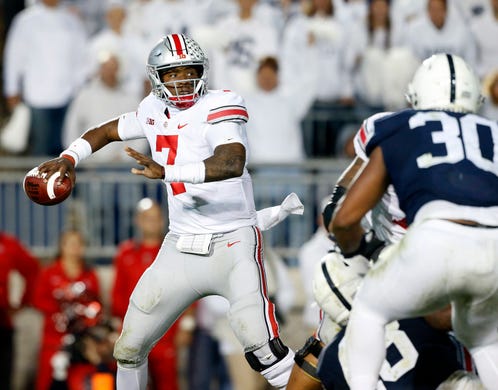 1. Ohio State (5-0, 2-0) – If there was any doubt which team was the best in the Big Ten, the Buckeyes squashed that by rallying from two touchdowns behind in the fourth quarter on the road to knock off Penn State, highlighted by Dwayne Haskins throwing two touchdown passes in the final seven minutes. It’s hard to see where the Buckeyes get tested again until maybe at Michigan State in mid-November. Last week: 1. Chris Knight, AP
Fullscreen 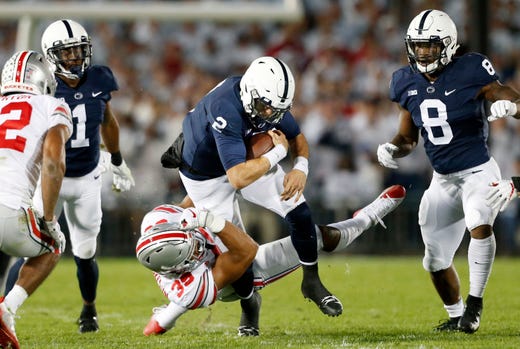 2. Penn State (4-1, 1-1) – The Nittany Lions seemed to have everything in control in the fourth quarter at home against Ohio State, only to watch the Buckeyes rally for a win as their own rally stalled with a bizarre fourth-down run call. A much-needed break comes up this week before the Nittany Lions attempt to bounce back in two weeks against Michigan State. Last week: 2. Chris Knight, AP
Fullscreen 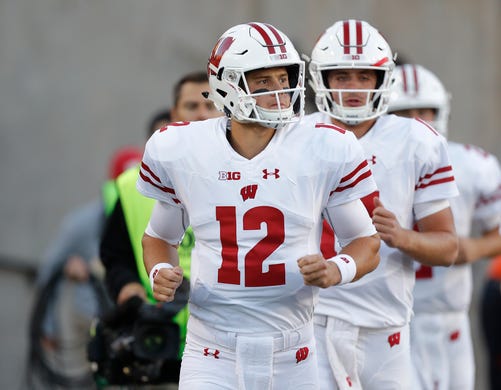 3. Wisconsin (3-1, 1-0) – The Badgers had the week off following last week’s critical win over Iowa that put them in control in the Big Ten West. A bit of a tune-up is next with Nebraska coming to town before another big one as the Badgers hit the road to take on Michigan in a couple of weeks. Last week: 3. Matthew Putney, AP
Fullscreen

4. Michigan (4-1, 2-0) – It was looking bleak for the Wolverines as they fell behind by 17 at Northwestern only to score 20 unanswered to pick up the win. The tough stretch is just getting started, though, as a tough Maryland team comes to town next followed by Wisconsin, Michigan State and Penn State in consecutive weeks. Last week: 4. Jim Young, AP
Fullscreen 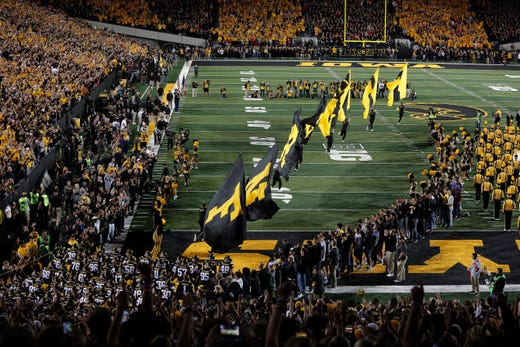 5. Iowa (3-1, 0-1) – Another team with a week off, the Hawkeyes will need to bounce back from last week’s loss to Wisconsin. It puts them in a tough spot in the Big Ten West as they’ll need to remain perfect and hope the Badgers slip up. The challenge for the Hawkeyes is that four of the next five games are on the road. Last week: 5. Matthew Putney, AP
Fullscreen 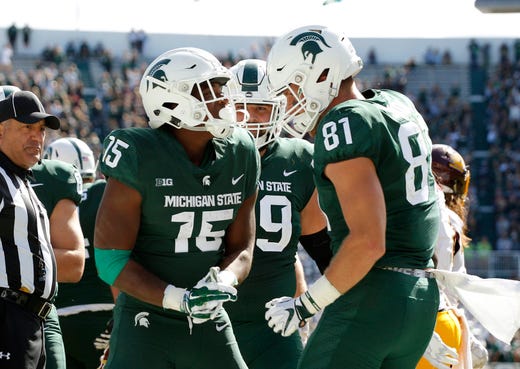 6. Michigan State (3-1, 1-0) – The Spartans went out of conference to get another win over Central Michigan. However, the offensive struggles continue as they are still not running the ball great and had another turnover in the end zone. Northwestern comes to town next before a trip to Penn State that could say a lot about MSU’s fate in the Big Ten East. Last week: 6. Al Goldis, AP
Fullscreen 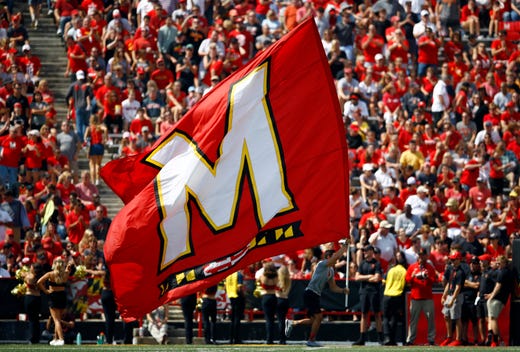 7. Maryland (3-1, 1-0) – The mildly surprising Terrapins had the week off following a blowout win last week over Minnesota. The first real test in the Big Ten East comes with next week’s trip to Michigan. A win would be huge for a team not many expected to be a factor in the division. Last week: 7. Patrick Semansky, AP
Fullscreen 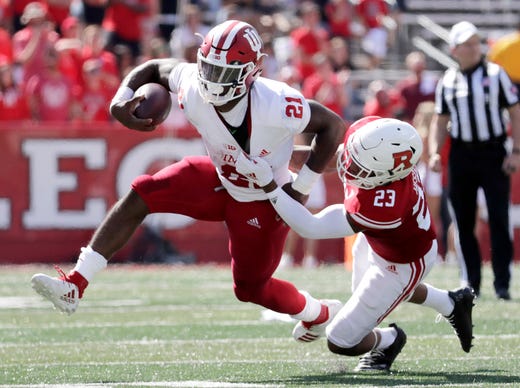 8. Indiana (4-1, 1-1) – The Hoosiers didn’t blow out Rutgers, but getting a division win on the road is big for a team that seems on the verge of moving the program toward relevance in the East. It gets real with a trip to Ohio State next, a game no one will give the Hoosiers a chance to win. Last week: 8. Julio Cortez, AP
Fullscreen 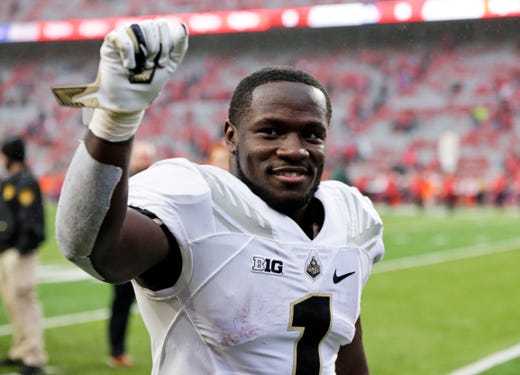 9. Purdue (2-3, 1-1) – The Boilermakers are probably better than their record indicates and it’s hard to gauge what a win at Nebraska means considering how the Cornhuskers are struggling. But getting things turned around after losing the opening three games is vital, and the Boilermakers are on the right path headed into their bye week. Last week: 11. Nati Harnik, AP
Fullscreen 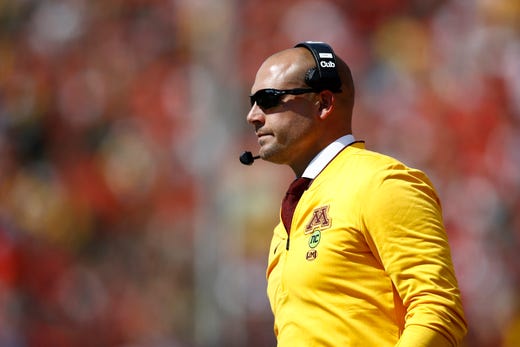 10. Minnesota (3-1, 0-1) – The Golden Gophers were off this week after losing the Big Ten opener at Maryland as well as losing standout cornerback Antoine Winfield Jr. for the season to a foot injury. They’ll have a chance to mix things up in the Big Ten West this week by hosting Iowa before hitting the road to take on Ohio State. Last week: 9. Patrick Semansky, AP
Fullscreen 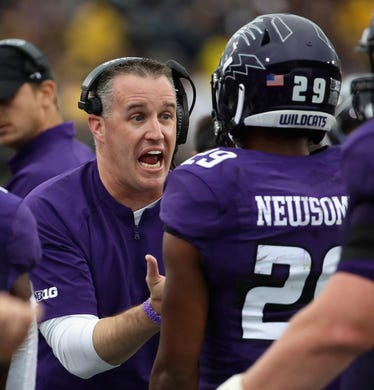 11. Northwestern (1-3, 1-1) – Things couldn’t have started much better for the Wildcats at home against Michigan, scoring the first 17 points of the game. However, the offensive problems returned as the Wildcats didn’t score again and allowed the Wolverines to rally. It will be a tall task to bounce back this week with a trip to Michigan State coming up. Last week: 10. Jonathan Daniel, Getty Images
Fullscreen 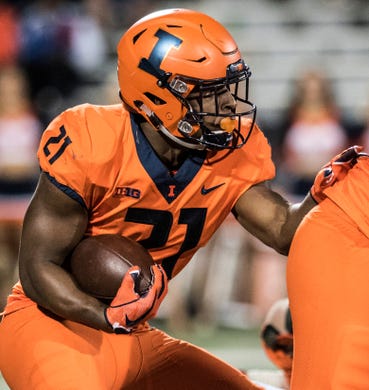 12. Illinois (2-2, 0-1) – The Fighting Illini had the week off and will have a decent shot at ending their two-game skid this week by heading to Rutgers. However, nothing is a given for the Illini, who have won just two Big Ten games since Lovie Smith took over as coach in 2016. Last week: 12. Holly Hart, AP
Fullscreen

13. Nebraska (0-4, 0-2) – The miserable start for coach Scott Frost’s tenure at his alma mater continued with a loss at home to Purdue. It’s far from what the Cornhusker faithful expected when the former quarterback was hired, and it will get even tougher this week with a trip to Wisconsin. Last week: 13. Nati Harnik, AP
Fullscreen

14. Rutgers (1-4, 0-2) – After opening the season with a victory, the Scarlet Knights have lost four straight following a loss at home to Indiana. Getting Illinois at home this week might be their best chance for another victory this season as they likely won’t be favored again the rest of the way. Last week: 14. Julio Cortez, AP
Fullscreen 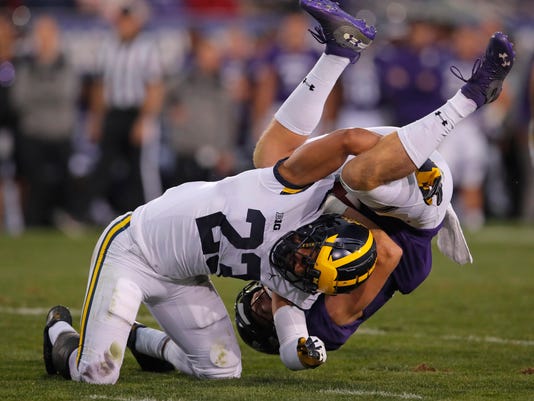 Michigan, after just getting past Northwestern 20-17, dropped one spot to No. 15 in this week’s Associated Press college football poll, released Sunday.

Meanwhile, Michigan State, which thumped Central Michigan, 31-20, improved one spot to No. 20 in the AP poll.

In the Amway coaches’ poll, Michigan and Michigan State both fell one spot – UM to No. 16 and MSU to No. 19.

The Wolverines (4-1) next play Maryland at home on Saturday (noon, ABC).

The Spartans (3-1) are home against Northwestern on Saturday (noon, FS1).

More: Defense turns up the pressure to fuel Michigan comeback

After winning top-10 matchups, Ohio State moved up to No. 3 and Notre Dame rose to No. 6 in the AP poll.

Ohio State moved past Clemson after rallying in the fourth quarter at Penn State. Clemson slipped to No. 4 after a close victory at home against Syracuse. The Buckeyes and Tigers each received a first-place vote.

LSU held steady at No. 5 and Notre Dame moved up two spots after beating Stanford. Oklahoma fell to No. 7 and No. 9 West Virginia returned to the top 10 for the first time since 2012, when it reached No. 5 early in the season. Washington also moved into the top 10 after routing BYU.