Michigan at Michigan State: Who has the edge?

Michigan at Michigan State: Who has the edge? 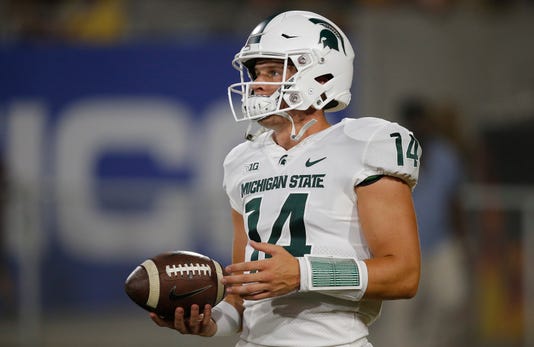 When MSU has the ball

While the offense, overall, has struggled, Michigan State has found some success through the air, ranking fourth in the Big Ten in passing yards per game at 271.5. It hasn’t truly taken off for two reasons — turnovers and health. Quarterback Brian Lewerke has thrown seven interceptions through six games, the same number he threw all of last season, while two of those have come in the end zone. And while the Spartans entered the season with arguably the best threesome in the conference at receiver, they’re without Cody White (hand) and might be without Darrell Stewart Jr. (ankle). On top of that, MSU’s tight ends have caught just nine passes. Michigan’s pass defense is ranked No. 1 in the nation, allowing an average 129.1 yards, and is fifth nationally in pass efficiency defense. The Wolverines have allowed five passing touchdowns and have seven interceptions so far this season, including three returned for touchdowns. Safety Josh Metellus leads the team with three interceptions, including one he returned 73 yards for a touchdown vs. SMU. Brandon Watson has two interceptions, including a 46-yard pick six, Noah Furbush has one and Lavert Hill returned his first interception of the season 21 yards for a touchdown last week against Wisconsin. Edge: Michigan

More: Wojo: Pressure is all on the Wolverines to solve the Spartans riddle

This matchup doesn’t look good for the Spartans, who are averaging just 123 yards a game on the ground, among the worst in the nation. They’re without running back LJ Scott, but the issues have been up front as the offensive line has struggled. Michigan State found some creases last week against Penn State, but to this point, its biggest runs have come from wide receivers as the offensive line has battled its share of injuries. Stopping the run is a point of pride for most defenses, and Michigan, which enters the game ranked No. 2 in total defense, is no different. The Wolverines are ranked 15th nationally against the run, holding teams to an average 108.9 yards. They have 54 tackles for loss among 20 players, and Chase Winovich leads the way with 10.5. Michigan defensive coordinator Don Brown demands all-out aggressive play and that means getting in the backfield as much as possible. Michigan has 20 sacks, including six at Northwestern and four against Nebraska. Edge: Michigan 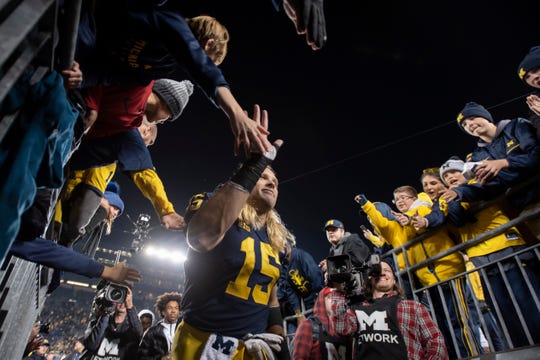 When UM has the ball

The Spartans have allowed their share of yards through the air but they’ve done a good job of avoiding the big plays and have excelled at keeping teams from scoring touchdowns once they reach the red zone. Michigan State has allowed seven touchdowns in opponents’ 15 red-zone trips, which ranks third in the Big Ten, while grabbing nine interceptions, also good for third in the conference. Last season, Michigan has nine passing touchdowns, including only three by the receivers. So far this fall, with quarterback Shea Patterson running the offense, he has thrown for 10 touchdowns (against three interceptions), including five to receiver Donovan Peoples-Jones. Patterson has completed 68.6 percent of his passes for 1,311 yards and averaged 187.3 yards a game. Michigan has an efficient pass game, ranking 26th in pass efficiency but ranks 93rd in pass offense (207.0). Of the Wolverines’ 28 offensive touchdowns, 12 have been passing. In 30 trips to the red zone, though, Michigan has 18 touchdowns, including six pass. Edge: Michigan

Michigan State was putting up video game numbers through the first five games of the season before allowing 205 yards last week at Penn State. However, outside of two big plays, Michigan State allowed only 79 yards to the Nittany Lions. The Spartans still rank No. 1 in the nation in run defense but will be challenged by a Michigan run game that has gained more than 300 yards in a game twice this season, including last week against Wisconsin. This will be the first real test for Michigan’s offensive line since the season opener at Notre Dame and an opportunity to see if the line has improved as it seems it has against defensive front sevens that aren’t nearly as good as the Spartans. The Wolverines are 28th in rushing, averaging 217 yards, and Karan Higdon has led the way with five 100-yard rushing games in the six games he’s played. He is averaging 114.5 yards. A facet to the run game the Spartans will have to contend with his quarterback Shea Patterson, who took off on an 81-yard run last week against Wisconsin. Edge: Michigan State

►Felton Davis, WR: He might be the only healthy receiver the Spartans have, which means the Wolverines will likely give the senior plenty of attention. However, Penn State did the same thing last week and Davis still had eight catches for 100 yards and two touchdowns, including the game-winner. There seems little doubt he’ll be getting his share of targets in his final appearance in the rivalry.

►Brian Lewerke, QB: It’s been an erratic season for the junior, who has been erratic with his accuracy and has thrown seven interceptions. But he’s proven once again that he has poise in big games, proven in last week’s winning drive in the final minutes at Penn State. Considering how he’s struggled this season, there’s reason to be optimistic that a breakout game is coming.

►Joe Bachie, LB: The junior is the heart of the Michigan State defense but he was vital last week against Penn State by keeping an eye on and containing quarterback Trace McSorley. Expect a similar approach against Michigan’s Shea Patterson as the Bachie and the Spartans will do their best to keep Patterson in the pocket and from getting out and making plays. 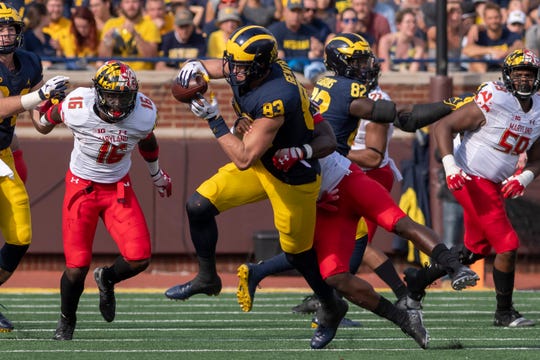 ►Chase Winovich, DE: Winovich, the fifth-year senior defensive end, might be known as much for his long blond hair that flies out of his helmet as he is for his fly-around defensive play. He is second on the team with 39 tackles, 10.5 tackles for loss, three sacks and has one pass breakup this season. Winovich had his biggest game on the road against Northwestern when the Wolverines came back from a 17-point deficit to win, 20-17. He led the team there with nine tackles, three tackles for loss and one sack. Winovich was named the team’s “Blue Collar Award” winner last year.

►Zach Gentry, TE: The 6-foot-8 former quarterback has said he finally has come into his own as a tight end. Gentry has made a catch in 11 straight games and currently leads the team with 21 receptions for 311 yards (14.8 average per catch). He is a big target — obviously — and has been more physical this season getting separation and has become a favorite target of quarterback Shea Patterson, Of his 21 catches, 14 have gone for first downs or touchdowns. Gentry has the two highest receiving totals for Michigan this year, 95 against SMU and 112 against Maryland.

►Devin Bush, LB: Bush was asked on Detroit radio station 97.1 recently about the Wolverines’ rivalries against Michigan State and Ohio State, and he clearly has ill will toward the Spartans. You wouldn’t know that Bush grew up in Florida the way he feels about this in-state rivalry game. Bush leads the Wolverines in tackles with 45, including six tackles for loss and 3.5 sacks. He also has two pass breakups. He has had seven or more tackles in five of Michigan’s seven games this season.