The Hawkeyes prevail despite blowing a 15-point lead. 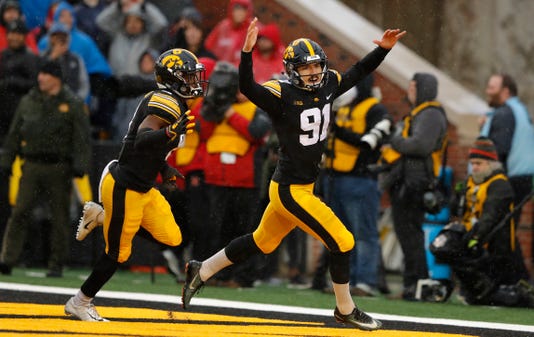 Mekhi Sargent ran for a career-high 173 yards and scored twice for the Hawkeyes (8-4, 5-4 Big Ten), who have won four straight over the Cornhuskers for the first time.

The Hawkeyes nearly blew this one big time though.

A curious decision by Iowa to fake a field goal at Nebraska’s 3-yard line failed, and it led to a 98-yard scoring drive from the Huskers to make it 28-20 with 13:57 to go. Martinez then ran it from 3 yards out with 3:22 left and found Kade Warner in the back of the end zone to tie it up.

But star tight end T.J. Hockenson came through for Iowa with a 10-yard catch on a fourth-and-8 with 42 seconds to go — and Recinos put it through the uprights after missing a previous, shorter attempt at the same end of the field.

Sargent scored late in the second quarter on a 15-yard run and early in the third on a 5-yard pass from Nate Stanley to help the Hawkeyes jump ahead 28-13. But the Huskers and Adrian Martinez, their brilliant freshman quarterback, showed resilience in nearly pulling off the stunner.

“I wish it was a little cleaner. But, I mean, to send the seniors out with a win, you can’t ask for anything more,” Iowa defensive lineman Anthony Nelson said.

After a three-game losing streak robbed them of a shot at the Big Ten title, the Hawkeyes finished on a high note and will now await their bowl fate. It wouldn’t be surprising to see them end up in either the Holiday or the Citrus Bowl.

When this rivalry was renewed back in 2011, who would have thought that it’d be Nebraska that couldn’t keep up? The Huskers were expected to be on near-equal footing with Ohio State and Michigan by now, but they head into the offseason looking up at the likes of Iowa and Northwestern.

Nebraska showed progress over the second half of the season though, and they came up just a play or two short of handing Iowa coach Kirk Ferentz an absolutely brutal defeat.