Michigan State, Michigan could both be No. 1 seeds in NCAA Tournament

Most experts see both teams making long runs in the NCAA Tournament, hope that they'll play each other at some point in that event.

Michigan State, Michigan could both be No. 1 seeds in NCAA Tournament 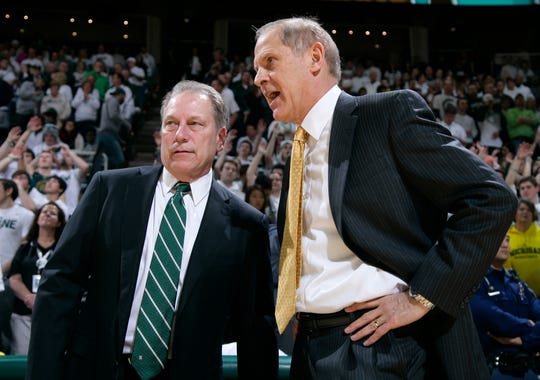 Something is looming for Michigan and Michigan State.

Like the dark clouds that slowly build in the Western sky on a summer afternoon, it’s clear that something is coming. Something that has the potential to pack quite a punch.

That’s what the next few weeks will feel like for Spartans and Wolverines fans as they wait for what is shaping up to be a pair of potentially epic regular-season matchups, ones rarely seen around here.

Both Michigan and Michigan State will have things to do before the storm arrives. The Wolverines will continue to try and stay unbeaten overall as they navigate the rigors of the Big Ten while the Spartans, also unbeaten in conference play, match their rival step by step.

Tough games and potential pitfalls await. Each has a tough road game this week — No. 6 Michigan State at Nebraska on Thursday and No. 2 Michigan at Wisconsin on Saturday.

But it’s all just a warm-up for what’s to come twice in the final two weeks of the season. The teams will first meet on Feb. 24 in Ann Arbor and then close the regular season in East Lansing on March 9. The games will likely determine the Big Ten champion, but they could also just be the opening act for what might come in the conference tournament in Chicago and, if the stars align, the NCAA Tournament and Final Four in Minneapolis.

Both teams, possible No. 1 seeds, meeting on the game’s biggest stage.

“I would love to see a Michigan-Michigan State game in Minneapolis,” ESPN analyst Jay Bilas said. “That would be a lot of fun.”

That might be the understatement of the year, at least around these parts.

For years, Michigan State’s Tom Izzo has talked about his desire for Michigan State and Michigan to mirror the Duke-North Carolina rivalry. Last week, Michigan’s John Beilein suggested it already does.

At times, it has come close, but more often, the Spartans and Wolverines have been at a championship level at different times. In the last decade, Michigan State reached the Final Four in 2009 and 2010 and earned a No. 1 seed in 2012 while Michigan reached the national title game in 2013. Each team fell short of the Final Four in 2014, but Michigan State was back in 2015 and won the Big Ten the next season.

More: Predictions: Will Michigan State, Michigan be unbeaten in Big Ten when they meet?

Since last season, though, things are starting to line up. Michigan State won 30 games and was the Big Ten champion, but two of the losses were to Michigan, including in the conference tournament. The Wolverines rode that momentum to the national championship game, while the Spartans were upset in the second round.

And through 17 games this season, there might not be two better teams in the country.

“I think it’s great for the league,” Big Ten Network analyst Shon Morris said. “I think it’s even better for the league now that they’ve made the scheduling adjustment and it’s gonna be a true home-and-home. You’re not gonna have a scheduling quirk ever again when they only play once. I think that’s great for not just the schools but for the conference, this year in particular.

That possibility has created a buzz around the programs, heightened by the fact both were No. 1 seeds in Joe Lunardi’s bracketology last week on ESPN. Lunardi's bracketology that came out Tuesday has MSU as a No. 2 seed and UM still a No. 1.

The more immediate question is whether the teams remain unscathed before they square off in a little more than five weeks? 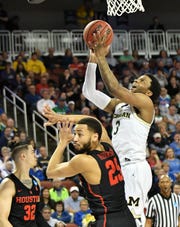 Guard Zavier Simpson has been a big reason for the Wolverines perfect record thus far this season, but he'll need to shore up his free-throw shooting before the NCAA Tournament begins. (Photo: Robin Buckson, Detroit News)

For Michigan (17-0, 6-0 Big Ten), the toughest test might come Saturday at Wisconsin, though a trip to Indiana in a couple weeks will be difficult and Maryland coming to town in early February will be no picnic. Plus, the Wolverines have the added pressure of being undefeated overall.

“They’re gonna get beat,” Bilas said on “View from the Press Box,” a podcast with The News’ Angelique Chengelis. “I don’t have any qualms about that. I don’t think anybody is gonna go undefeated this year.

“But I will tell you this, there’s nobody out there Michigan cannot beat. They can beat everybody. So, theoretically they can win every game they play, but they’re gonna have a bad shooting night and they’re not so physically gifted they’re gonna overpower anybody. Zavier Simpson is such a good player and I love his running hook and he’s such a great leader, but when your point guard doesn’t make free throws you’re gonna get beat. It doesn’t mean they can’t win the national championship. They can, but that means over time that’s gonna catch up to them at least in one game.”

Michigan State (15-2, 6-0) isn’t dealing with the weight of an undefeated overall record, but it is dealing with some key injuries as Joshua Langford has missed four games because of an ankle injury and it’s unclear when he’ll be back, while his replacement, Kyle Ahrens is battling a bad back.

That makes Thursday’s trip to Nebraska a dicey one as road games with Iowa, Purdue and Wisconsin come up before the first Michigan game.

“There too many good teams, too many times they have to go on the road and they’re gonna get everybody’s best shot,” Morris said. “I would say the chances of both of them being unblemished in the league by that time would be, obviously, pretty small.”

Unlikely? Sure. However, that doesn’t seem to be lessening the excitement that’s building around each program.

“They’re both Final-Four worthy,” Bilas said. “Now, they play differently, but both of them are worthy of the Final Four, and I’m a big believe in both.”