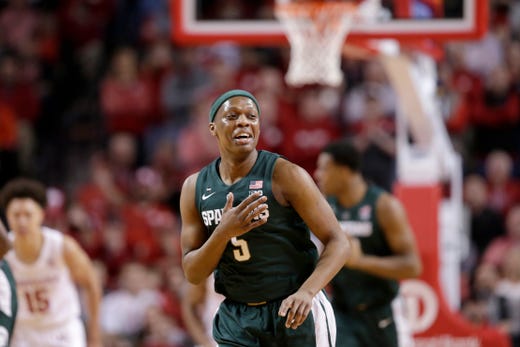 Go through the gallery to see the Detroit News Big Ten Power Rankings for men’s basketball for the week of Jan. 21, compiled by Matt Charboneau. Nati Harnik, AP
Fullscreen 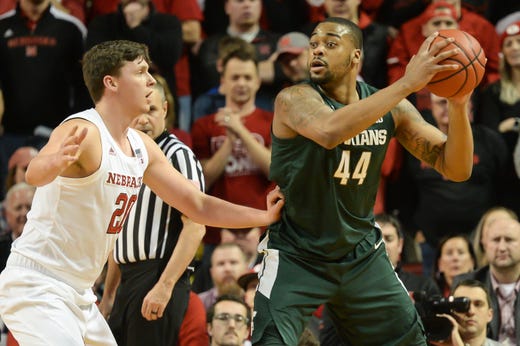 1. Michigan State (16-2, 7-0) – The Spartans continue to take care of business without guard Joshua Langford and Kyle Ahrens, but things will get much tougher this week as Maryland visits the Breslin Center on Monday followed by road games at Iowa and Purdue, two teams that are surging. Ahrens could return this week from a back injury but Langford’s status regarding his injured ankle remains a question mark. Last week: 2. Steven Branscombe, Getty Images
Fullscreen

2. Michigan (17-1, 6-1) – The run was going to end at some point, and there’s hardly any shame in losing at Wisconsin, one of the tougher places to play in the Big Ten, especially when a team turns the ball over 16 times like the Wolverines did on Saturday. It hardly changes the fact the Wolverines are still among the best teams in the nation and should bounce back this week with a home game vs. Minnesota followed by a trip to Indiana. Last week: 1. Dylan Buell, Getty Images
Fullscreen 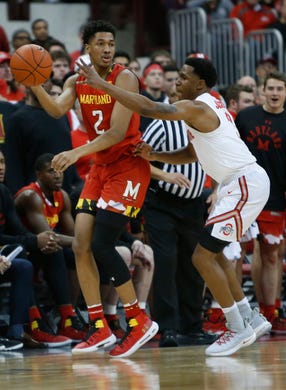 3. Maryland (16-3, 7-1) – While most of the attention in the Big Ten has surrounded Michigan State and Michigan, the Terrapins have quietly put together a seven-game winning streak, including three straight victories on the road. They’ll get a chance to extend that on Monday at Michigan State. A win on the road against the last conference unbeaten team would mean Mark Turgeon’s young team is for real. Last week: 3. Jay LaPrete, AP
Fullscreen 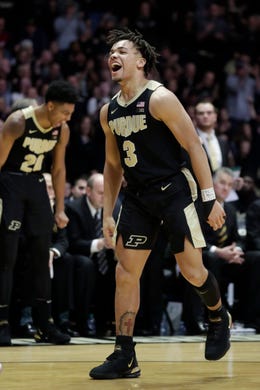 4. Purdue (12-6, 5-2) – A tough schedule in the first half of the season had the Boilermakers searching for answers. But as the Big Ten schedule has resumed, guard Carsen Edwards is starting get some help from the likes of Nojel Eastern and Trevion Williams. They’ve won three straight, capped by a blowout of rival Indiana and now hit the road to take on slumping Ohio State, followed by a rematch with Michigan State. Last week: 6. Michael Conroy, AP
Fullscreen

5. Iowa (16-3, 5-3) – The Hawkeyes took advantage of what is likely the only easy week possible in the Big Ten, beating Penn State and Illinois, two teams that have combined to win one conference game this season. Even so, the Hawkeyes have won five straight, have turned the season around and now get set to welcome first-place Michigan State to town on Thursday. Last week: 4. Matthew Putney, AP
Fullscreen 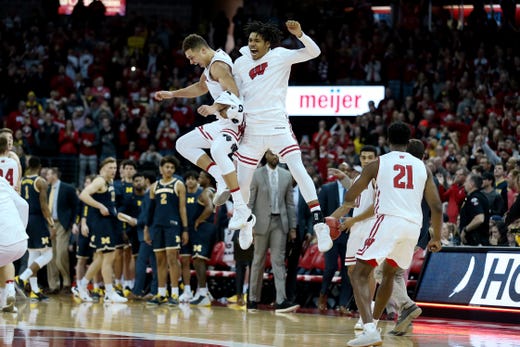 6. Wisconsin (12-6, 4-3) – The Badgers recorded the biggest win of the Big Ten season on Saturday, knocking off unbeaten Michigan. It wasn’t something that anyone saw coming as the Badgers had lost two straight entering the game, but the typical grind-it-out style worked to perfection as it frustrated a normally unflappable Michigan team. Games this week against Illinois and Northwestern provide a chance to keep within striking distance of first place. Last week: 9. Dylan Buell, Getty Images
Fullscreen 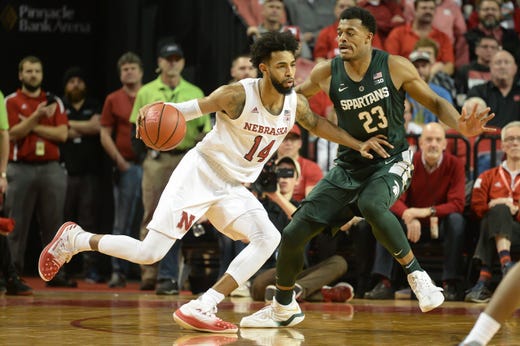 7. Nebraska (13-5, 3-4) – Just when it looked like the Cornhuskers were starting to find their groove following an impressive road win over Indiana, they allowed a 20-game home winning streak come to an end by losing at home to Michigan State. It was a solid defensive effort, but the offense had its problems, something that should get straightened out at Rutgers on Monday followed by a home game with Ohio State. Last week: 10. Steven Branscombe, Getty Images
Fullscreen

8. Minnesota (14-4, 4-3) – The Golden Gophers continue to be all over the map, but the past week can hardly be seen as anything else other than a disappointment. It began with the Gophers getting run out of the building against an Illinois team that had lost five straight and was winless in the Big Ten. It ended with a one-point victory over winless Penn State. A trip to Michigan on Tuesday presents another tough challenge. Last week: 5. Paul Battaglia, AP
Fullscreen 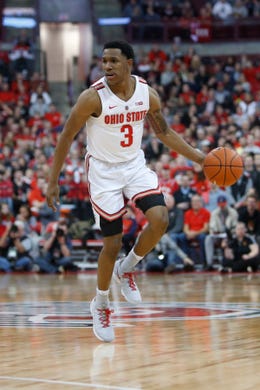 9. Ohio State (12-5, 2-4) – Things have shifted dramatically in the past couple of weeks for the Buckeyes. Road losses at Rutgers and Iowa were sandwiched with home losses to Michigan State and Maryland, providing evidence there’s still quite a gap between the young Buckeyes roster and the top teams in the Big Ten. With Purdue and Nebraska up this week, things could get worse before they get better. Last week: 8. Jay LaPrete, AP
Fullscreen 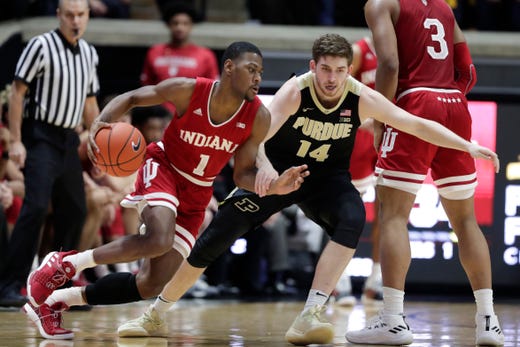 10. Indiana (12-6, 3-4) – Like Ohio State, the Hoosiers are watching their season spiral out of control. A one-sided loss to rival Purdue on Saturday counted as the fourth straight loss for the Hoosiers, who have faced the likes of Michigan, Maryland and Nebraska during this skid. The schedule offers few breaks as this week includes a trip to Northwestern and a rematch at home with Michigan. Last week: 7. Michael Conroy, AP
Fullscreen 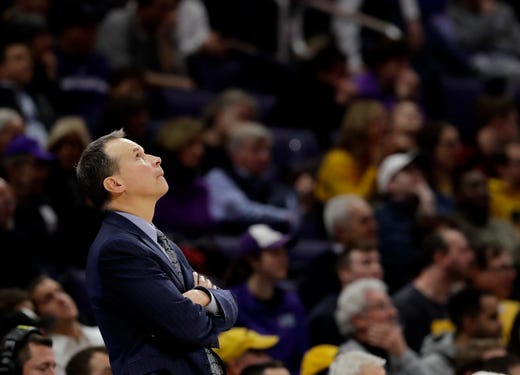 11. Northwestern (11-7, 2-5) – The Wildcats ended a two-game skid by getting a road win at Rutgers after Vic Law returned from a knee injury and hit a decisive basket late in the second half. They’ll need a lot more than that from the senior if they expect to climb back in the race as a home game with Indiana and a trip to Wisconsin are up this week. Last week: 12. Nam Y. Huh, AP
Fullscreen 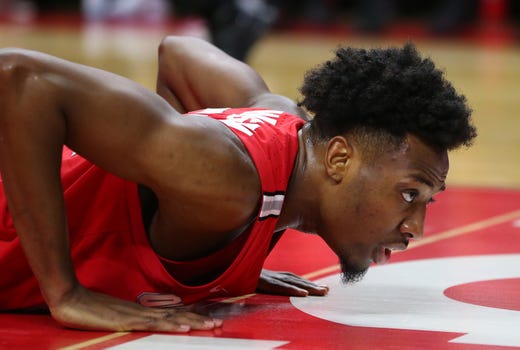 12. Rutgers (8-9, 1-6) – While the young Scarlet Knights have been bad on the road, they remain a tough out at home as they came up just short in a loss to Northwestern. An interesting week awaits the Scarlet Knights as they get Nebraska at home and then travel to Penn State. Getting a win over Nebraska would be big but a win over the Nittany Lions almost seems like a must. Last week: 11. Rich Schultz, Getty Images
Fullscreen 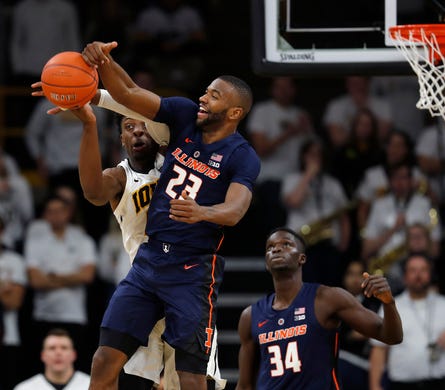 13. Illinois (5-13, 1-6) – We had to move up the Fighting Illini after getting their first victory, especially when it was by 27 points over Minnesota. It was back to reality on Sunday with a one-sided loss at Iowa, but the week was still a success for the Illini. Whether the young team can cause more problems in the conference remains to be seen with Wisconsin and Maryland up this week. Last week: 14. Matthew Putney, AP
Fullscreen 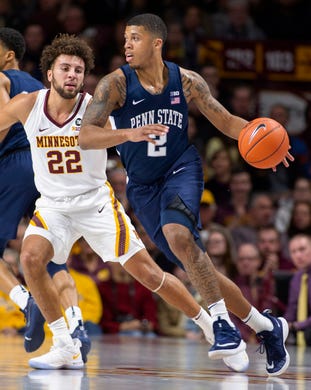 14. Penn State (7-12, 0-8) – Patrick Chambers called his team the best 0-8 team in the country, which might be true but doesn’t change the fact the Nittany Lions haven’t won a conference game, with their last victory coming in late December. They’ll get a week to prepare for Rutgers, a game that should be winnable but hardly guaranteed the way the season as gone for the Nittany Lions. Last week: 13. Paul Battaglia, AP
Fullscreen 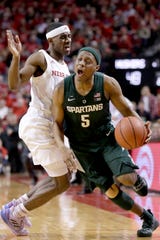 The junior was named the Big Ten's Player of the Week for a third time this season, thanks to a 29-point, six-assist effort last week in Michigan State's 70-64 victory at Nebraska.

Winston also earned the weekly honor on Nov. 26 and Dec. 31, and appears to be the front-runner for bigger things in the conference.

He was 9-of-15 shooting from the floor, and 8-of-9 from the foul line. He scored nine of the Spartans' final 11 points to secure the victory, halting the Cornhuskers' 20-game home winning streak.

Iowa guard Joe Wieskamp was named the Big Ten Freshman of the Week, after averaging 17 points and six rebounds in a pair of victories.