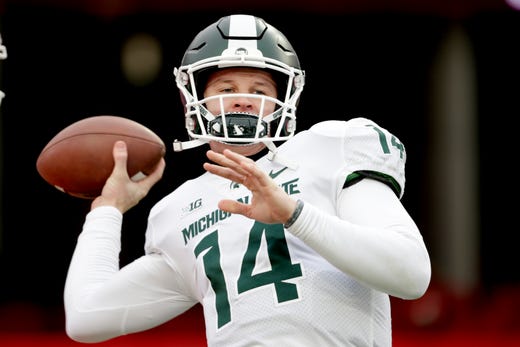 Go through the gallery as Matt Charboneau of The Detroit News ranks and analyzes the Big Ten quarterbacks for 2019. Nati Harnik, AP
Fullscreen 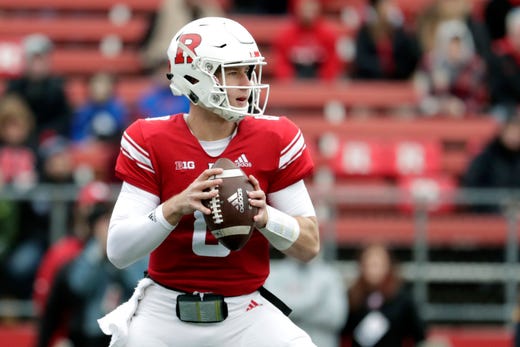 14. Artur Sitkowski, Rutgers: Sitkowski was the starter last season as a freshman and enters preseason camp in the No. 1 spot once again. However, he hardly locked down the position after throwing for 1,158 yards last season with 18 interceptions, and completing just 49.1 percent of his passes. The Scarlet Knights went the transfer route to add some depth as former Texas Tech starter McLane Carter will push Sitkowski to potentially breathe some life into the worst offense in the Big Ten last season. Julio Cortez, AP
Fullscreen 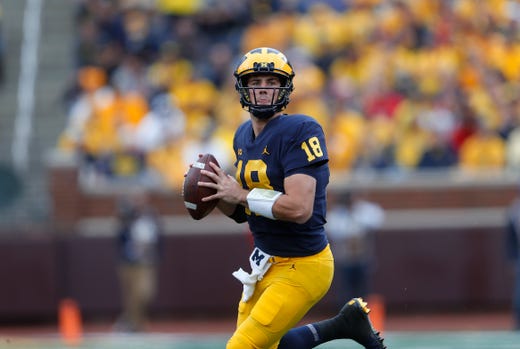 13. Brandon Peters, Illinois: A transfer from Michigan, Peters likely will have the leg up entering preseason camp as the Fighting Illini and coach Lovie Smith will try and figure out whether to go with experience or youth. Peters gets the edge in terms of playing time, completing 58 of 110 passes for 680 yards and four touchdowns in eight games over the previous two seasons. However, freshman Isaiah Williams comes to campus with plenty of buzz after passing for 8,108 yards and 103 touchdowns while rushing for 2,752 yards in high school. Paul Sancya, AP
Fullscreen 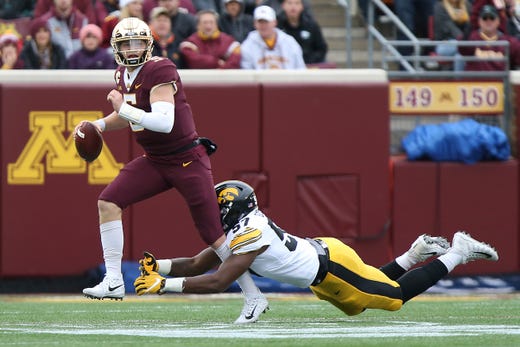 12. Zack Annexstad, Minnesota: Annexstad won the job last season as a freshman walk-on, but he ended up sharing time with then redshirt freshman Tanner Morgan after being slowed by injury. Coming out of spring ball, neither had a stranglehold on the No. 1 spot, meaning the competition will likely go deep into preseason camp, much as it did last season. Both threw nine touchdown passes last season while Morgan eked out a better record, going 4-2 in his six starts while Annexstad was 3-4. Stacy Bengs, AP
Fullscreen 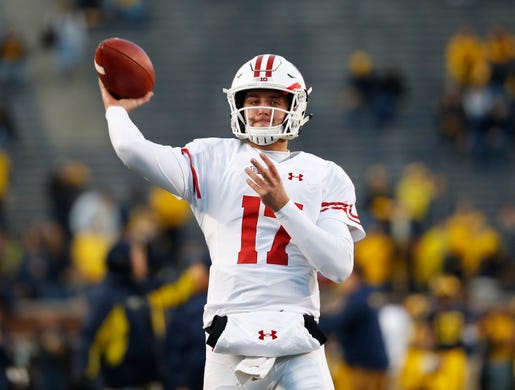 11. Jack Coan, Wisconsin: Thanks to an injury last season to Alex Hornibrook, Coan started four of the final six games. He didn’t exactly light things up but he was efficient, completing 60.2 percent of his passes and throwing just three interceptions. Odds are Coan begins the season as the Badgers’ starter and he’ll have the luxury of Jonathan Taylor, arguably the top running back in the nation, behind him. But he’ll likely be pushed by freshman Graham Mertz, as well as sophomore Danny Vanden Boom and redshirt freshman Chase Wolf. Paul Sancya, AP
Fullscreen 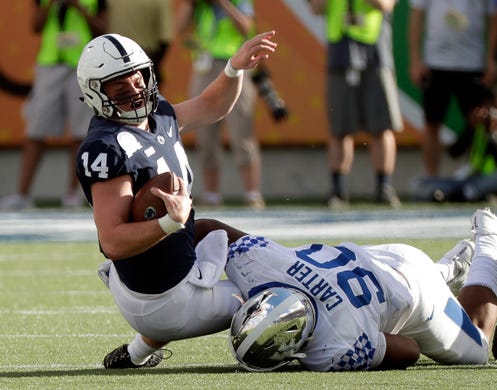 10. Sean Clifford, Penn State: When Tommy Stevens decided to transfer, that left Clifford is the likely successor to Trace McSorley. Clifford saw minimal action last season as a redshirt freshman and his play this spring played a role in Stevens deciding to leave State College. Redshirt freshman Will Levis could also get a shot at some point this season, but Clifford seems solid as the No. 1 quarterback as the Nittany Lions move on from one of the best in program history. John Raoux, AP
Fullscreen 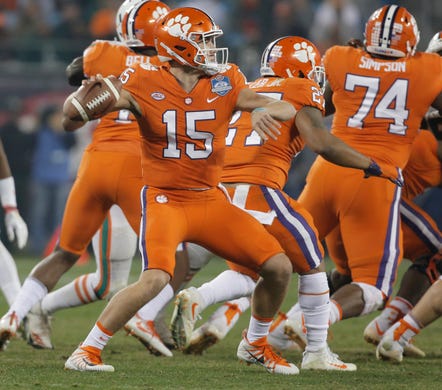 9. Hunter Johnson, Northwestern: Johnson was a five-star recruit when he went to Clemson, but the Tigers were loaded and Johnson opted to transfer. After sitting out last season, he becomes the successor to Clayton Thorson as the Wildcats hope Johnson’s lofty recruiting rankings were no fluke. In limited action at Clemson it didn’t appear as they were. Johnson completed 21 of 27 passes for 234 yards and two touchdowns. Bob Leverone, AP
Fullscreen 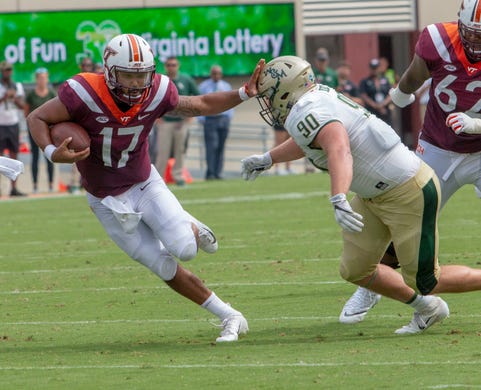 8. Josh Jackson, Maryland: Another transfer, Jackson is hardly a newcomer. He was a standout in 2017 at Virginia Tech, throwing for 2,991 yards and 20 touchdowns while rushing for 324 yards and six touchdowns. He was in position to have a breakout in 2018 but he suffered a season-ending injury in the third game of the year. Now he’s at Maryland, where first-year coach Mike Locksley will be happy to have an experienced quarterback running the show. Matt Bell, AP
Fullscreen 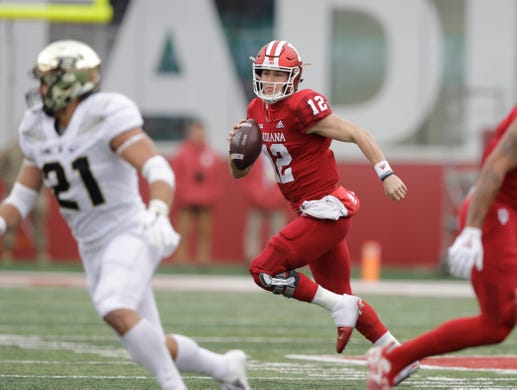 7. Peyton Ramsey, Indiana: In his first season as a full-time starter, Ramsey had his share of ups and downs in 2018. He completed 66 percent of his passes, second-best in the Big Ten, while throwing for 2.875 yards and 19 touchdowns. However, Ramsey also threw 13 interceptions, which means he’ll need to take care of the ball to remain the clear No. 1. If he doesn’t, keep an eye on sophomore Michael Penix, who saw some time last season, and Utah transfer Jack Tuttle. Darron Cummings, AP
Fullscreen 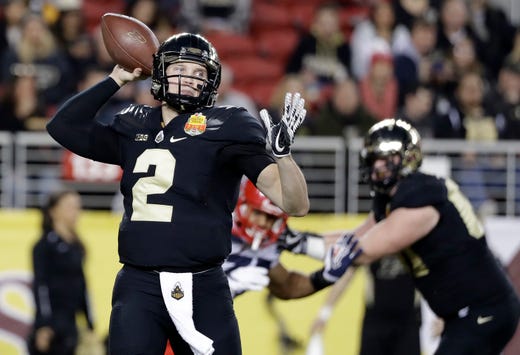 6. Elijah Sindelar, Purdue: With David Blough gone, Sindelar returns as the Boilermakers’ starter. He started eight games in 2017 and threw for 2,099 yards and 18 touchdowns, playing three games with a torn ACL. After playing just two games last season, he jumps back into the No. 1 spot for coach Jeff Brohm and has the benefit of throwing the ball to Rondale Moore, one of the most dynamic playmakers in the country. Marcio Jose Sanchez, AP
Fullscreen 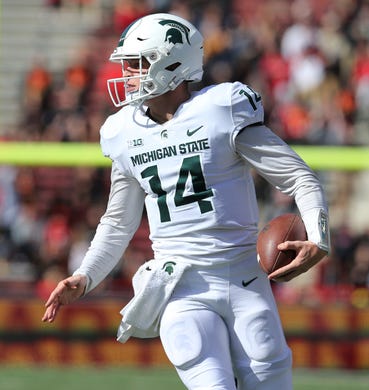 5. Brian Lewerke, Michigan State: After throwing for nearly 2,800 yards and 20 touchdowns in 2017, Lewerke struggled early last season, then tried to play through a shoulder injury in the second half of the year as Michigan State’s offense finished 13th in the conference in scoring. Now healthy, Lewerke could be the key to turning the Spartans’ offensive fortunes as new coordinator Brad Salem takes over. Gary Cameron, AP
Fullscreen 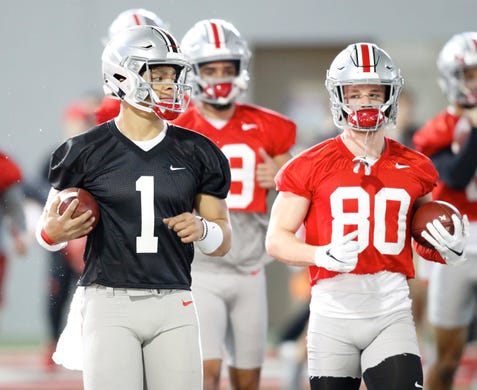 4. Justin Fields, Ohio State: If potential and recruiting rankings were all that mattered, the former five-star who transferred from Georgia would be at the top of the list. The fact remains, though, that Fields has seen only limited action. He did play in 12 games last season for the Bulldogs and looked good, completing 27 of 39 passes for 328 yards and four touchdowns while rushing for 266 yards and four scores. If that trajectory continues, Fields will likely finish 2019 as the Big Ten’s best. Paul Vernon, AP
Fullscreen 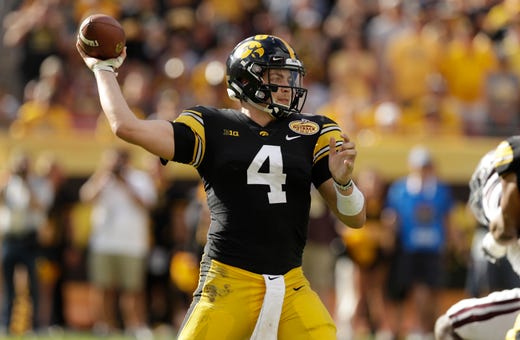 3. Nate Stanley, Iowa: Entering his third season as the Hawkeyes’ starter, Stanley has been one of the most productive quarterbacks in program history. His 52 touchdown passes over a two-year span are the most in school history and he needs 23 more to become the Hawkeyes’ all-time leader. He’s also thrown for 5,351 yards in his career and has completed 59.3 percent of his passes. The Hawkeyes expect to contend in the West and Stanley’s performance will have a big say in if they get to the Big Ten title game. Chris O'Meara, AP
Fullscreen 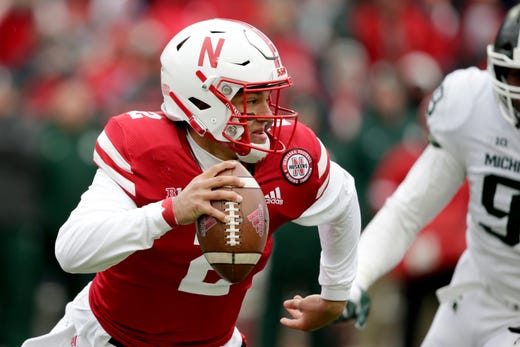 2. Adrian Martinez, Nebraska: After an early injury, Martinez helped spark the Cornhuskers’ offense as they finished the season strong under first-year coach Scott Frost. Martinez completed 64.6 percent of his passes for 2,617 yards and 17 touchdowns with just eight interceptions. He also finished second on the team with 629 rushing yards and added eight rushing touchdowns. Plenty of folks are expecting Nebraska to be in the mix for the West title and Martinez is a big reason why. Nati Harnik, AP
Fullscreen 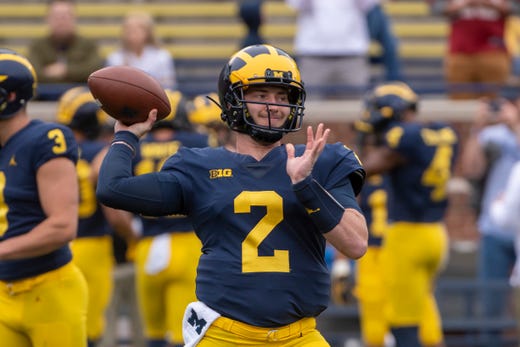 1. Shea Patterson, Michigan: Patterson brought stability to the Wolverines’ quarterback room after transferring from Ole Miss. He completed 64.6 percent of his throws for 2,600 yards and 22 touchdowns with only seven interceptions. Patterson also proved he can make plays with his feet, running for 273 yards and two touchdowns. With former Alabama assistant Josh Gattis taking over the offense, it could lead to even bigger numbers for Patterson. David Guralnick, Detroit News
Fullscreen

Columbus, Ohio — Ohio State coach Ryan Day on Monday made official what most people figured was a foregone conclusion: Georgia transfer Justin Fields will be the starting quarterback when the No. 5 Buckeyes open the season Aug. 31 against Florida Atlantic.

Day had lured the talented sophomore in January to succeed Dwayne Haskins Jr., and Fields practiced with the starters from the moment he arrived. His main competition this preseason was Gunnar Hoak, a graduate transfer from Kentucky who got to campus this summer and is still memorizing the playbook. 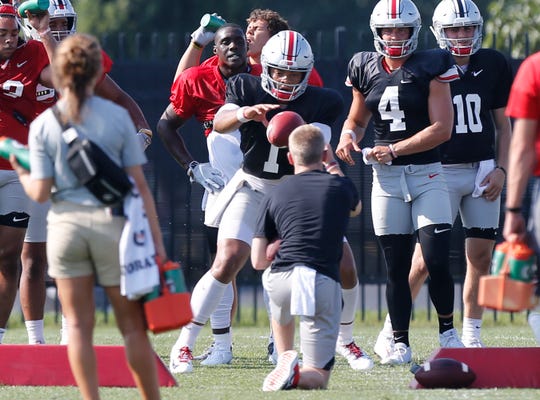 Still, Day was measured in his praise of Fields, who was one of the highest-rated prep prospects in the nation in 2018 but couldn’t wrest the starting job away from Jake Fromm at Georgia last season before deciding to transfer.

“All that means is that Justin will be taking the first snap on (in the opener), and where it goes from there, who knows,” Day said. “All the guys had good camps, but Justin kind of separated himself the last week.”

Fields showed some chops but was not spectacular in the spring game, and Day said it took him a few weeks of preseason camp to find his feet.

“I think just now he’s starting to scratch the surface,” Day said. “I still don’t think he’s where he needs to be.”

Fields said he has worked hard to get better on the field and has been trying to be more vocal and become a more forceful leader, an area where Haskins initially struggled last season.

“I feel like I’m improved a lot overall, just every part of my game,” Fields said. “I feel way more comfortable than in the spring, and I think all my teammates see that. Coach Day definitely sees it. I just feel more comfortable with the playbook and more comfortable in the pocket.”