Penix won his first two college starts before sitting out last weekend’s 51-10 loss to Ohio State with an undisclosed injury. 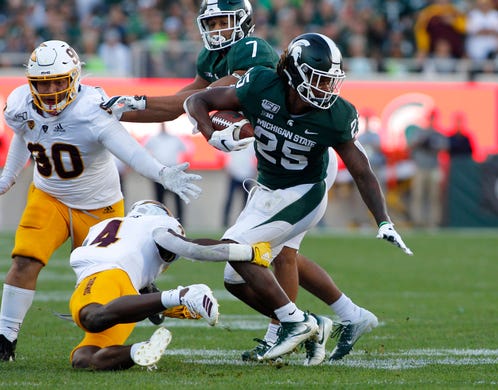 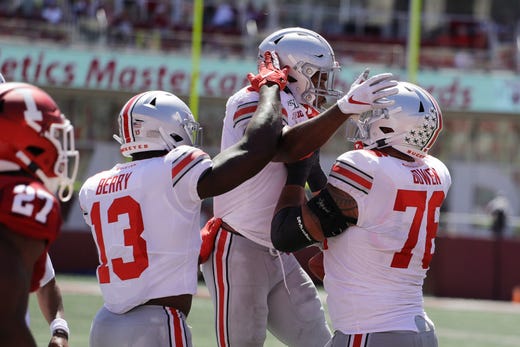 1. Ohio State (3-0, 1-0) – The Buckeyes made quick work of Indiana in their Big Ten opener and are quickly establishing themselves as the clear team to beat. J.K. Dobbins ran for 193 yards and a touchdown while quarterback Justin Fields threw for three more scores. The Buckeyes have yet to face a stiff test and likely won’t next week against Miami (Ohio). A trip to Nebraska in two weeks might be the first time they’ll be pushed. Last week: 1. Darron Cummings, AP
Fullscreen 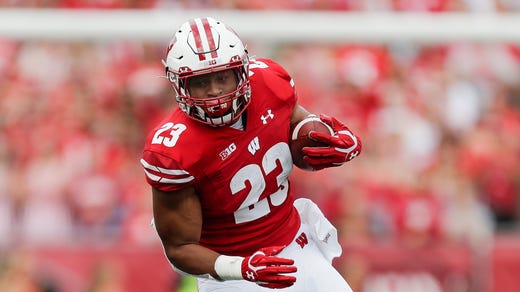 2. Wisconsin (2-0) – Nothing to lose this week for the Badgers as they had the week off heading into the matchup with Michigan. Slowing the momentum might not be the greatest scheduling break for the Badgers, who are averaging 55 points a game and have yet to allow a single point through two games as they look to establish themselves as the West favorite. Last week: 2. Andy Manis, AP
Fullscreen 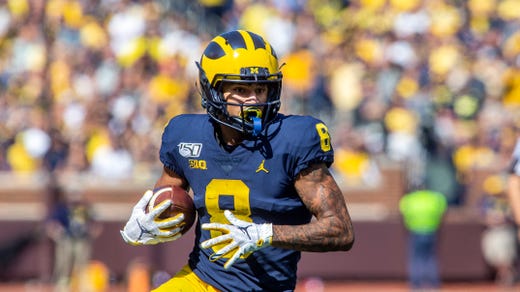 3. Michigan (2-0) – No complaints about the offense this week as the Wolverines didn’t play. What Jim Harbaugh and Josh Gattis did during the bye week will prove to be critical as a trip to Wisconsin is up next to face a Badgers team that hasn’t allowed a point this season. Coming off the near-loss to Army, it will be interesting to see how the Wolverines rebound and if they can keep from putting the ball on the ground. Last week: 3. Tony Ding, AP
Fullscreen 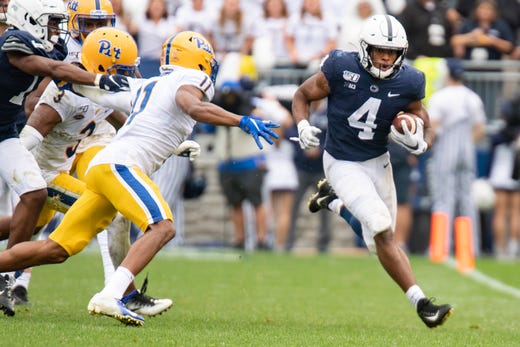 4. Penn State (3-0) – The offense came to a grinding halt against Pitt, but the defense did enough to keep the Nittany Lions unbeaten in the final installment of the rivalry. It was far from pretty, but rivalry games like this one rarely are. The Nittany Lions now get a week off to fine-tune things before opening Big Ten play in two weeks at Maryland. Last week: 4 Barry Reeger, AP
Fullscreen

5. Iowa (3-0, 1-0) – Another Big Ten team playing a rival from out of the conference, the Hawkeyes endured two weather delays that totaled more than three hours to rally past Iowa State. Nate Stanley (4) threw for 201 yards and ran for a touchdown as the Hawkeyes had to settle for four field goals before getting a late fourth-down stop to preserve the win on the road. Last week: 6. Charlie Neibergall, AP
Fullscreen 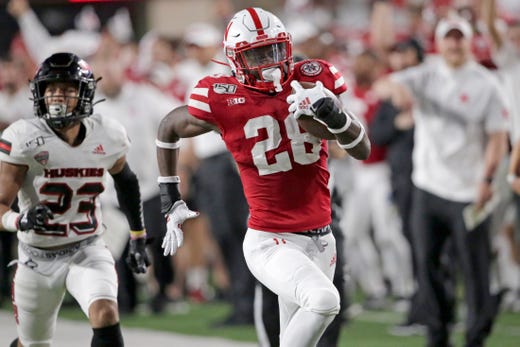 6. Nebraska (2-1) – It didn’t take long for the Cornhuskers to rid themselves of the bad taste from last week’s blown 17-point lead at Colorado as they cruised past Northern Illinois. Quarterback Adrian Martinez threw for two touchdowns and ran for another as Nebraska had 525 yards of total offense and posted its largest margin of victory over an FBS opponent since a 39-point win over South Alabama in 2015. Last week: 10. Nati Harnik, AP
Fullscreen

7. Michigan State (2-1) – A week after appearing to fix their offensive woes, the Spartans managed just seven points before allowing a touchdown in the final minute to lose to Arizona State. The offensive failures were compounded by 10 penalties and a host of questionable coaching decisions, including on the final play when the Spartans rushed on the field-goal unit and had a game-tying kick negated because of too many men on the field. Last week: 5. Al Goldis, AP
Fullscreen 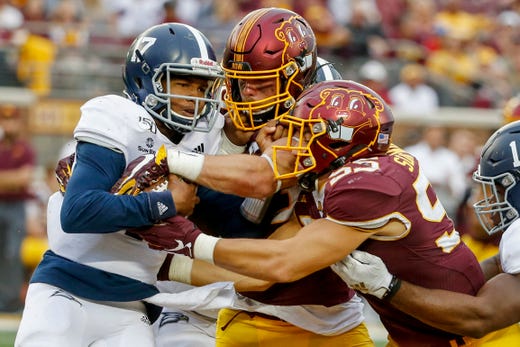 8. Minnesota (3-0) – The unblemished record looks good next to the Golden Gophers in the standings, but there certainly has to be some concern as the Gophers needed a touchdown with 13 seconds to play to beat Georgia Southern. After eking by South Dakota State and Fresno State, the Gophers at least get a week off before beginning Big Ten play with a trip to Purdue to try and remain unbeaten. Last week: 8. Bruce Kluckhohn, AP
Fullscreen 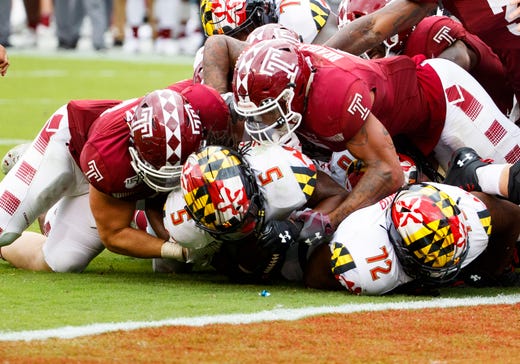 9. Maryland (2-1) – So much for the high-flying offense, apparently. The Terrapins opened the season by scoring 79 points in the first week and 63 the second, but by halftime against Temple had managed just two points. The Terps rallied to take the lead but gave up a late score, then got stuffed at the goal line to close the game. They’ll get next week off before beginning conference play against Penn State. Last week: 7. Chris Szagola, AP
Fullscreen 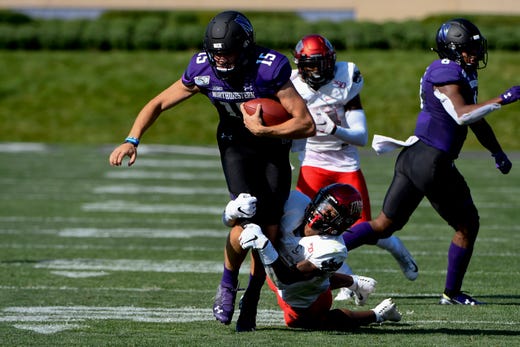 10. Northwestern (1-1) – The Wildcats had two weeks to think about the season-opening loss at Stanford and thanks to a visit from UNLV, the confidence seems to be returning. Quarterback Hunter Johnson rebounded from a brutal debut to throw for one touchdown and run for another while Drake Anderson ran for 141 yards. Michigan State comes to town next week for the Big Ten opener for both teams. Last week: 13. Matt Marton, AP
Fullscreen 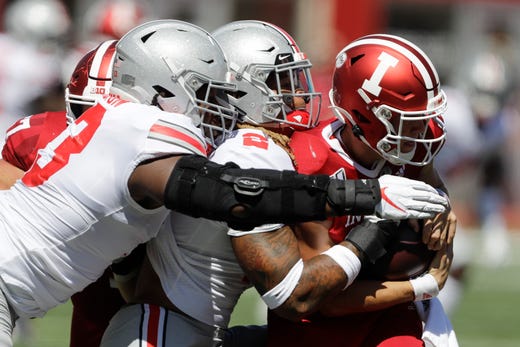 11. Indiana (2-1, 0-1) – Again, life in the Big Ten East can just be brutal for teams like the Hoosiers. There was no stopping Ohio State this week, a task made tougher as starting quarterback Michael Penix Jr. was out with an injury. He was replaced by former starter Peyton Ramsey but not much went right for the Hoosiers, who ran 31 times for 42 yards, and allowed five sacks and 306 rushing yards. Last week: 9. Darron Cummings, AP
Fullscreen 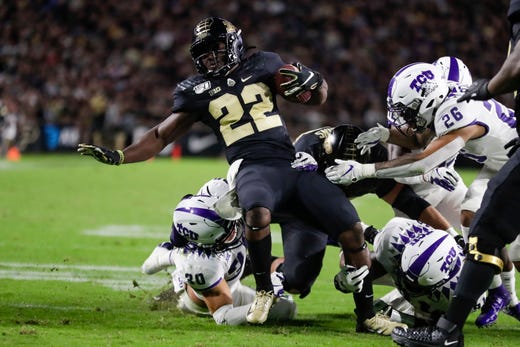 12. Purdue (1-2) – Things are going the wrong direction quickly for Jeff Brohm’s team after the Boilermakers allowed 346 rushing yards and got blown out at home by TCU. Quarterback Elijah Sindelar was out with a concussion and the offense never found any rhythm as the Boilermakers now head into a bye week before beginning Big Ten play in two weeks against Minnesota. Last week: 11. Michael Conroy, AP
Fullscreen 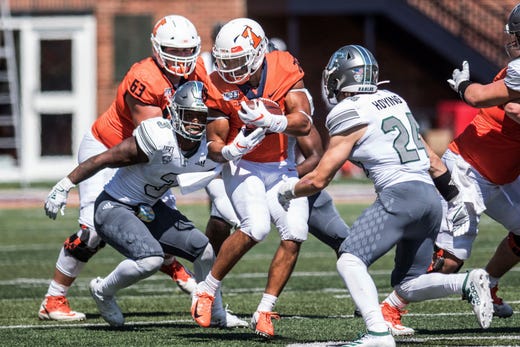 13. Illinois (2-1) – The Fighting Illini were feeling good about their 2-0 start, but that came to an abrupt end thanks to Big Ten killer Eastern Michigan, which knocked off a Big Ten team for the third straight season. The defense continues to have problems slowing teams, even under the guidance of head coach Lovie Smith, something that will need to get fixed before next week’s meeting with Nebraska. Last week: 12. Holly Hart, AP
Fullscreen 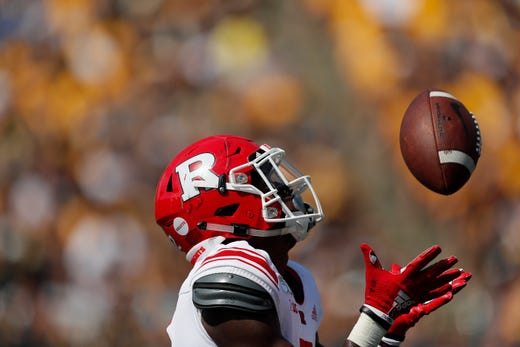 14. Rutgers (1-1, 0-1) – The Scarlet Knights had the week off, so there are no real complaints. However, after getting shut out by Iowa last week, there are plenty of questions that needed to be answered during the bye. We’ll see if any of them were against Boston College before Rutgers jumps back into Big Ten play at Michigan in two weeks. Last week: 14. Matthew Putney, AP
Fullscreen

They might not know until Saturday morning: Coach Tom Allen told reporters Monday his injured starting quarterback will likely a game-time decision for the second straight week. 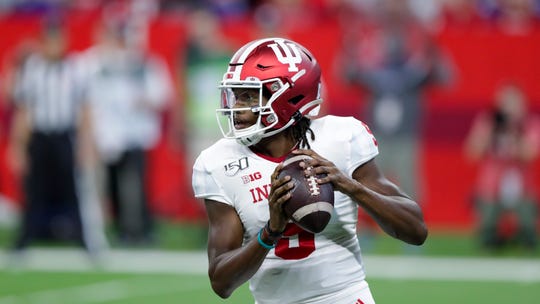 “I don’t foresee it, hopefully, not being a day-to-day thing the rest of the season, but at the same time, for this Saturday’s game, we definitely aren’t going to know for several more days,” Allen said. “He probably will eventually be a game-time decision with him, but I don’t expect that to keep being the case every single week.”

Penix won his first two college starts — against Ball State and Eastern Illinois — before sitting out last weekend’s 51-10 loss to Ohio State with an undisclosed injury.

He played less than a half in a 52-0 victory over Eastern Illinois, and Allen said late last week that he did not believe Penix was hurt during the game. He is coming off surgery for a torn anterior cruciate ligament in his right knee. The injury, which occurred in October, kept Penix limited in spring practice before beating out incumbent starter Peyton Ramsey for the starting job this summer.

Ramsey took over for Penix in the blowout win, started against the Buckeyes and would likely get the call again this weekend if Penix can’t play. Another redshirt freshman, highly-touted Jack Tuttle, finished the Ohio State game.

Allen has been short on details about the injury.

Penix got off to a fast start this season, flashing the potential coaches saw on the practice field. He threw for 326 yards and one touchdown while rushing seven times for 67 yards in a victory over Ball State. He was even better against Eastern Illinois, going 14 of 20 with 197 yards, two touchdowns and no interceptions before taking a seat.

Ramsey went into last weekend as the most accurate quarterback in school history. But the junior struggled against the Buckeyes, finishing 19 of 33 with 162 yards, no touchdowns and one interception.

Allen was so upset with Indiana’s overall performance he declined to hand out any of the traditional weekly team awards and acknowledged the defense had 16 missed tackles on 11 plays, allowing the Buckeyes to gain an additional 166 yards.

“One was a 65-yard after contact play, and that’s basically after we have a chance to tackle the ball carrier or the receiver that becomes the runner,” Allen said. “But most of them were out of the backfield.”

Getting Penix back could help Indiana (2-1, 0-1 Big Ten) rebound against the Huskies. Indiana is at Michigan State the following weekend.

But now they’re forced to play the waiting game for a second straight week.

“We just tell our guys, hey, you got to do everything you can, work as hard as you can to be back as soon as you can,” Allen said. “He is a young quarterback and so getting him reps is very important. So to me if he can, if he is able to go, then he needs to go.”