Jonathan Taylor ran for 119 yards and his 11th touchdown of the season as Wisconsin beat Northwestern, 24-15. 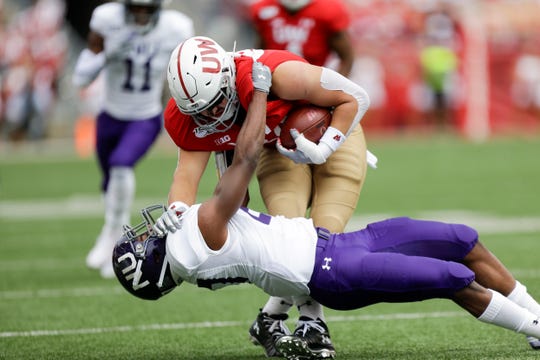 Madison, Wis. — Jonathan Taylor has had his fair share of struggles against Northwestern. The going was tough against the Wildcats again on Saturday, but Wisconsin’s Heisman Trophy contender helped the eighth-ranked Badgers stay unbeaten with some bullish yards.

Taylor ran for 119 yards and his 11th touchdown of the season, Wisconsin got two scores from its defense, and the Badgers defeated the Wildcats, 24-15.

“(I’m) proud of the way the guys battled and fought against a really good football team, a team that we’ve always had tough games with,” Wisconsin coach Paul Chryst said.

“We know we haven’t arrived yet,” said Taylor, who had just 46 yards and two fumbles in last year’s defeat. “We knew, coming into this game, it wouldn’t be easy at all. So one of the biggest things was just making sure every single week, wherever we’re playing at, we have the correct preparation and we have a great week of practice so that we can execute and come out with the win.”

Taylor reached 100 yards rushing for the 26th time in 31 career games and moved into fourth place on the Badgers’ career rushing list (4,730).

After allowing 81 yards rushing through the first three games, the Wisconsin defense surrendered 97 yards on the ground to Northwestern (1-3, 0-2).

The Badgers’ defense sacked backup quarterback Aidan Smith twice and starter Hunter Johnson three times, including one by safety Eric Burrell that caused a fumble by Johnson in the end zone. Matt Henningsen recovered to make it 14-3 in the third quarter for Wisconsin. Noah Burks added the other defensive score after intercepting Smith and returning it 68 yards down the Wisconsin sideline.

“Ball is floating in the air, first thing: catch the ball,” said Burks on what he was thinking on his touchdown. “Make sure that I secure it and from there look up field and try to run as fast as I can and get the yardage that I can. Luckily, I got some pretty good blocks.”

Johnson went 10-for-21 and Smith completed 8 of 20 passes and had a late 15-yard touchdown to JJ Jefferson. Drake Anderson had 16 carries for 69 yards and a 4-yard score for the defending Big Ten West champion Wildcats, who dropped their second straight conference game.

“They made the plays in the second half that make the difference in a game,” Northwestern coach Pat Fitzgerald said. “For us to give up two turnovers that led to touchdowns, that ends up being the difference in the game.”

Charlie Kuhbander had a 29-yard field goal for Northwestern in the first quarter. It marked the first points the Badgers have allowed in the first half this season.

Chris Orr had two sacks and Collin Wilder added another for a Badgers’ defense that is allowing just 7.3 points per game through the first four contests.

“I think it’s because we are all selfless,” Orr said of the defense. “Nobody is trying to do more than they need to do. Everybody is doing their job and doing it well. That’s all. That’s all you need to do to be a great defense.”

No. 5 Ohio State 48, (at) Nebraska 7: Justin Fields threw for three touchdowns and ran for another for Ohio State, and Nebraska quarterback Adrian Martinez was intercepted on three of the Cornhuskers’ first four series.

Fields, the transfer from Georgia who has played himself into the first tier of Heisman Trophy candidates, threw for 212 yards and kept alive his streak of no interceptions this season. He added 72 yards rushing. He now has had a hand in 23 touchdowns, 16 through the air.

J.K. Dobbins ran for 177 yards and a TD on 24 carries and became the 11th player in Ohio State history to go over 3,000 career rushing yards.

(At) No. 14 Iowa 48, Middle Tennessee 3: Nate Stanley threw for 276 yards and two touchdowns, Toren Young added a career-high 131 yards rushing and Iowa improved to 4-0 for the third time in 10 years.

Brandon Smith caught both of Stanley’s TD throws. Iowa gained 644 yards, its most in coach Kirk Ferentz’s 21 seasons in charge. Iowa had 358 yards in the first half and scored on its first four drives, a stretch headlined by an 18-yarder from Stanley to Smith that made it 24-0 midway through the second quarter.

Minnesota 38, (at) Purdue 31: Tanner Morgan threw for 396 yards and four touchdowns, both career highs, to help Minnesota hold off Purdue.

The Golden Gophers (4-0, 1-0) have won six straight overall and four in a row outside Minneapolis for the first time since 2003.

Purdue (1-3, 0-1) has lost two straight home games and this one was never really close after the Boilermakers lost starting quarterback Elijah Sindelar and All-American receiver Rondale Moore on the same first-quarter play.

Sindelar appeared to hurt his left shoulder when he was sacked and Moore appeared to suffer a lower left leg injury while running down the field.

Morgan took full advantage by completing his first 14 passes, throwing for 298 yards in the first half — four short of his previous career best — and running an offense that needed only two quarters to produce nine plays of 16 or more yards. He finished 21 of 22 with no interceptions.