Justin Fields threw for four TDs and J.K. Dobbins rushed for 121 yards as Ohio State rolled to a 52-3 win. 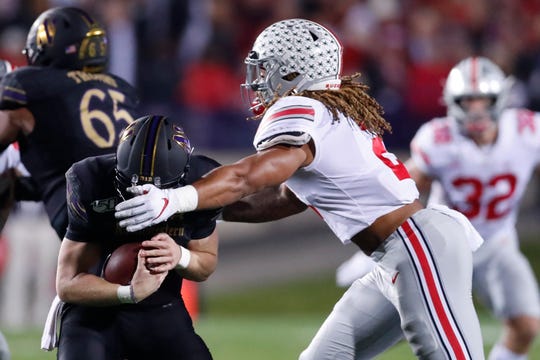 Evanston, Ill. — Eyeing a playoff spot and a shot at the national championship, No. 4 Ohio State sure is locked in at the moment.

“I just feel like it’s business,” defensive end Chase Young said. “That’s the mentality I have, just because I know we can’t have any fluke losses. It’s gonna mess with what we want to do.”

Fields completed 18 of 23 passes for 194 yards. The sophomore transfer from Georgia matched his career high for TDs through the air. He now has 22 passing and 30 overall on the season.

The nation’s second-leading rusher, Dobbins scored from the 5 in the second quarter after breaking off a 67-yard run. He also caught a 19-yard touchdown pass in the first half.

The junior now has 947 yards rushing after finishing with more than 1,000 in each of his first two seasons.

Chris Olave caught two TDs. Blake Haubeil kicked a 55-yard field goal that tied the second-longest in the history of the storied program. The Buckeyes racked up 480 yards while holding the Northwestern to 199 and remained unbeaten heading into their showdown at home with No. 6 Wisconsin next week.

“I think we feel good about the way we came out coming off the bye week — with energy, starting fresh and just refocused on all the things that matter within the program,” coach Ryan Day said. “Now we know we have a huge challenge next week. … We know what we have in store there, so it’s gonna be a really tough week, tough preparation, tough game, but I know the kids are gonna be excited to play it.”

The loss was the fourth in a row for Northwestern (1-5, 0-4). The Wildcats haven’t beaten a top-five opponent since the 1959 team opened with victories over No. 2 Oklahoma and No. 5 Iowa.

Aidan Smith, making his second straight start, was 6 of 20 for 42 yards and an interception. Smith and Hunter Johnson, who started the first four games before sitting out the loss at Nebraska two weeks ago because of a lower-body injury, were listed with the first team on the depth chart this week.

“We’re continually beating ourselves (on offense),” coach Pat Fitzgerald said. “We have guys that are pressing, trying to do too much. They care so much. They’re a great group of guys and that’s why my heart breaks for them.”