1. Ohio State (7-0, 4-0) – Not much is slowing the Buckeyes these days as Justin Fields (1) accounted for another four touchdowns, J.K. Dobbins piled up 121 yards and the defense was dominant again in a blowout win over Northwestern. In what might be the Buckeyes’ toughest test left, Wisconsin comes to town next week for a showdown that lost at least some of its luster after the Badgers’ loss to Illinois, but still a potential preview of the conference title game. Last week: 1. Charles Rex Arbogast, Associated Press
Fullscreen

2. Penn State (7-0, 4-0) – The Nittany Lions were dominant in the first half against Michigan, but the offense stalled out and they had to hang on to beat the Wolverines, thanks to a dropped pass in the end zone. The tough stretch continues next week with a trip to Michigan State followed by a week off then a trip to Minnesota, the surprise leader in the West. Last week: 3. Gene J. Puskar, Associated Press
Fullscreen 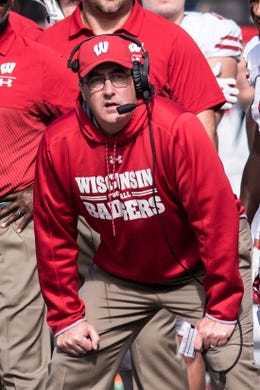 3. Wisconsin (6-1, 3-1) – The Badgers left Madison for the first time since the season opener and it clearly did not go well. The dominant defense disappeared, and the usually efficient Badgers committed a critical turnover in the fourth quarter to lead to the biggest upset of the season. It takes some shine off next week’s showdown with Ohio State and is a huge blow to any playoff hopes, but the path to Indianapolis is still there with Minnesota still on the schedule to close the season. Last week: 2. Holly Hart, Associated Press
Fullscreen 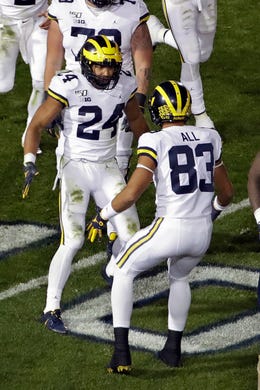 4. Michigan (5-2, 3-2) – The Wolverines played well enough to win for three quarters, but a slow start and a critical dropped pass in the end zone in the fourth quarter means that Jim Harbaugh’s team is likely facing another season without a shot at the Big Ten title. The Ohio State game is still out there, but Penn State would need to fall flat for the Wolverines to have a shot, something they’d love after the offense looked like it was finally finding its groove in Happy Valley. Last week: 4. Gene J. Puskar, Associated Press
Fullscreen 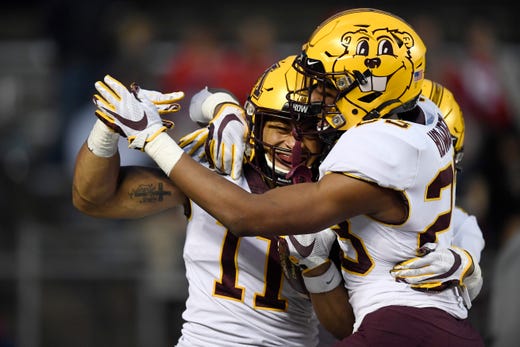 5. Minnesota (7-0, 4-0) – You can only play the teams on your schedule, and that’s fine. The Golden Gophers have beaten them all. However, we’re not anointing them division champs just yet, considering the close early season wins and the fact they beat up on Rutgers, the Big Ten’s auto-win. The running attack has been solid as the Gophers welcome Maryland next week, but from there things get tougher as Penn State, Iowa and Wisconsin are all up in the final four weeks. Last week: 5. Sarah Stier, Associated Press
Fullscreen 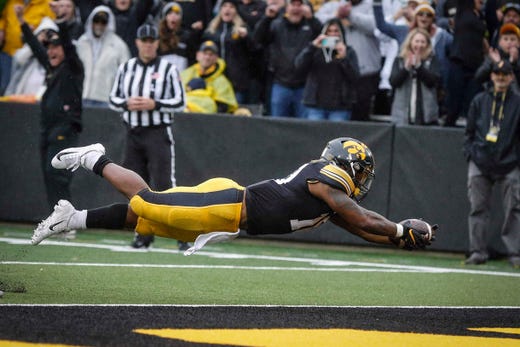 6. Iowa (5-2, 2-2) – The Hawkeyes’ defense continues to play well while the offense is having trouble getting much going. The two-game skid was snapped at home against Purdue; however, it didn’t come as easily as many would have expected. The next three games will say a lot about where the Hawkeyes will finish with road games against Northwestern and Wisconsin followed by a visit from first-place Minnesota. Last week: 6. Bryon Houlgrave, Associated Press
Fullscreen 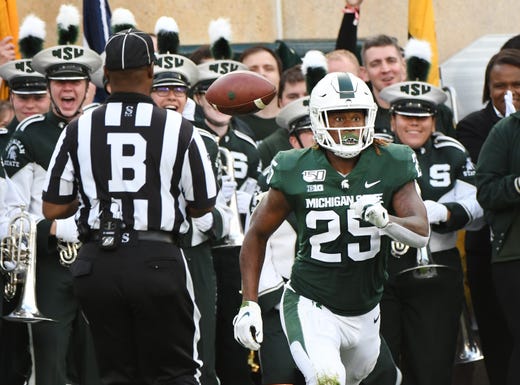 7. Michigan State (4-3, 2-2) – We’ll see if the week off helped at all for the Spartans after back-to-back blowout losses to Ohio State and Wisconsin. Penn State is the next top-10 team on the docket, as the Nittany Lions come to town off their big win over Michigan. While Michigan State’s offense needs to rediscover a pulse, the usually reliable defense is likely reeling and will need to rebound quickly against a big-play Penn State team. Last week: 7. Max Ortiz, Detroit News
Fullscreen 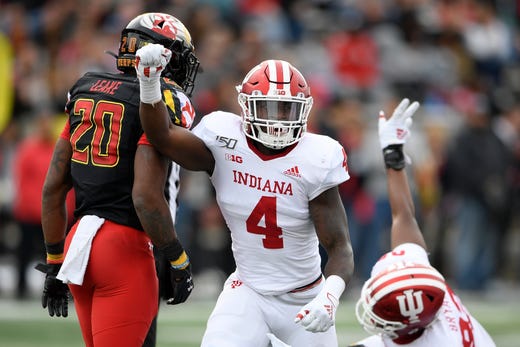 8. Indiana (5-2, 2-2) – Quarterback Michael Penix was knocked out of the game in the first half at Maryland, but Peyton Ramsey didn’t miss a beat and Stevie Smith ran for more than 100 yards as the Hoosiers won their second straight and are a game from being bowl eligible. While the schedule isn’t a piece of cake, there is a chance for the Hoosiers to get to eight wins, something they haven’t done in more than 25 years. Last week: 8. Nick Wass, Associated Press
Fullscreen 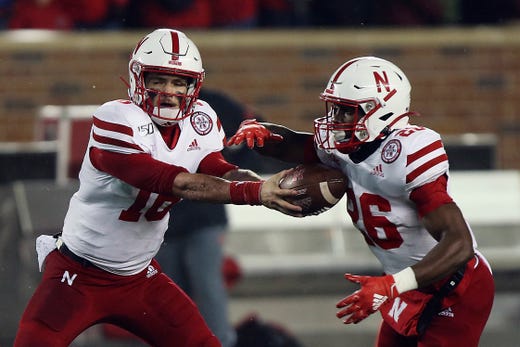 9. Nebraska (4-3, 2-2) – The Cornhuskers had the week off after getting rolled over at Minnesota. They’re hoping to get quarterback Adrian Martinez back after he sat out with a knee injury. This would be a good time to build some momentum as Indiana and Purdue are up next before a second bye week, then a matchup with Wisconsin. Get Martinez ready in that time, and there’s a chance for a strong finish. Last week: 9. Stacy Bengs, Associated Press
Fullscreen 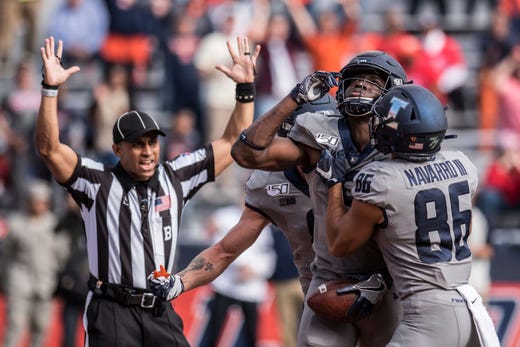 10. Illinois (3-4, 1-3) – After pulling off what is arguably the biggest upset in college football this season, it’s fair to say the Fighting Illini could be building a little momentum. The win over Wisconsin snapped a four-game skid and with Purdue and Rutgers up next, the Illini could get to the final stretch of the season with a shot at becoming bowl eligible. Last week: 13. Holly Hart, Associated Press
Fullscreen 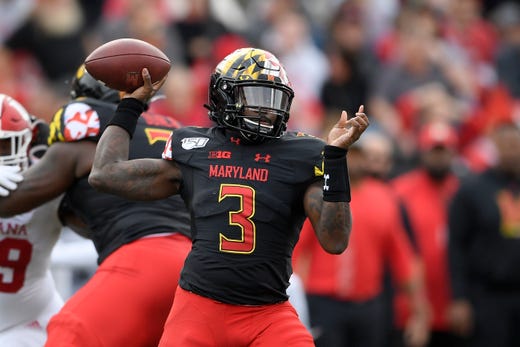 11. Maryland (3-4, 1-3) – The defense continues to be the problem for the Terrapins, who allowed Indiana to gain more than 500 yards in a home loss. The Terps had a chance in the final minutes but a late interception ended the rally. The Terps have now lost four of their last five and the remaining schedule is daunting with Minnesota, Michigan, Ohio State, Nebraska and Michigan State all left for a team struggling to reach a bowl game. Last week: 10. Nick Wass, Associated Press
Fullscreen 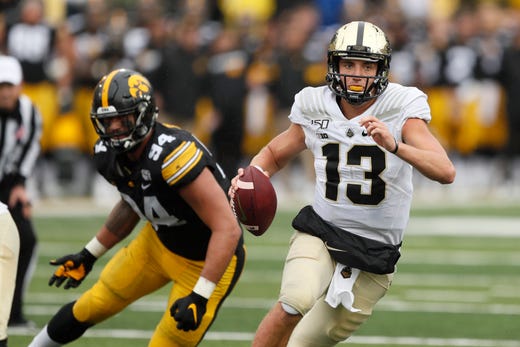 12. Purdue (2-5, 1-3) – Following the big win over Maryland, the Boilermakers were scrappy during their trip to Iowa, but couldn’t muster enough early when they committed a pair of turnovers before simply running out of time in the fourth quarter. Injuries have hit the Boilermakers hard, but it appears there’s still some fight, something that should be a factor down the stretch as it appears a bowl game is unlikely. Last week: 11. Charlie Neibergall, Associated Press
Fullscreen

13. Northwestern (1-5, 0-4) – It’s been quite the tumble this season for the defending West Division champions. They showed fight in losses to Wisconsin and Nebraska, but then came this week’s demoralizing blowout at the hands of Ohio State. It wasn’t a game the Wildcats were likely to win, but they were completely overmatched. Predicting too many more wins for the ‘Cats is tough, though they do get UMass at home in a few weeks. Last week: 12. Charles Rex Arbogast, Associated Press
Fullscreen

14. Rutgers (1-6, 0-5) – There’s not much to say about the Scarlet Knights at this point. Since beating UMass in the opener, the Scarlet Knights haven’t allowed fewer than 30 points in a game, have only scored in double digits once and have been shut out three times. They get Liberty next week, likely they’re only shot at getting a second win this season. Last week: 14. Sarah Stier, Associated Press
Fullscreen

KJ Hamler is showing its home state what it's missing. 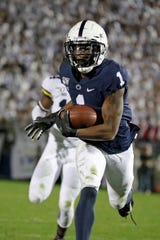 Hamler had six catches for 108 yards, including touchdown catches of 25 and 53 yards. It's his second 100-yard receiving game of the season, and fourth of his career. He has at least one reception in all 20 of his career games.

Hamler, who played two seasons at Orchard Lake St. Mary's before transferring to IMG Academy in Florida, will get a shot at another home-state team when Penn State takes on Michigan State on Saturday in East Lansing.

More: Big Ten at the halfway point: It's Ohio State, and everyone else

Big Ten players of the week