Champaign, Ill. — The conditions Saturday at Memorial Stadium were a depressing combination of rain, wind and flop sweat. The home crowd was leaving wet and unhappy after witnessing rival Northwestern upset the bowl-bound Illini 29-10. 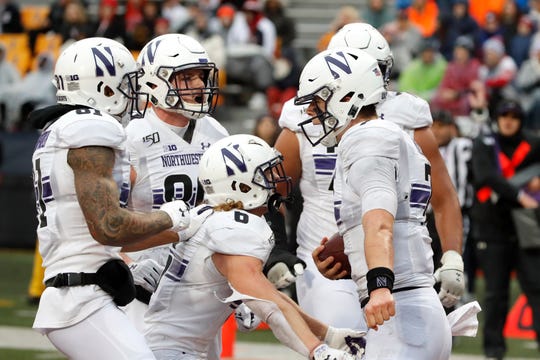 Northwestern quarterback Andrew Marty, right, celebrates his touchdown with teammates during the first half Saturday. Marty ran for 111 yards and two touchdowns while passing for another and Northwestern upset Illinois 29-10 (Photo: Charles Rex Arbogast, Associated Press)

“So, today wasn’t our best,” Smith said, smiling serenely. “Disappointment is not a strong enough word for today. But hey, we’re going bowling.”

Not so for Northwestern coach Pat Fitzgerald, whose team finishes the season in the Big Ten West cellar.

“We take this rivalry very seriously,” Fitzgerald said. “We have a lot to be grateful for, especially for our seniors. That was five straight (wins) against our in-state rivals.”

Sophomore Andrew Marty, who came into camp last summer fourth on the depth chart, ran for 111 yards and two touchdowns while passing for another.

It was the first Big Ten win this season for Northwestern (3-9, 1-8). Illinois – 21-point favorites going into the game – finished the regular season 6-6 and 4-5 in the conference. Illinois is bowl-bound despite the loss and will learn its destination on Dec. 8.

Marty made his first career start for the Wildcats after replacing Hunter Johnson during last week’s game. Marty was the first Northwestern quarterback since Clayton Thorason in 2015 to gain at least 100 yards rushing in a game.

“I saw a leader,” said Northwestern coach Pat Fitzgerald. “I saw a guy that was tough and physical. We’re seeing some of our younger players really come into their own.”

Smith, while not pleased with his team’s performance, heaped praise on Fitzgerald and the Wildcats.

“I have to give Pat Fitzgerald a lot of credit,” Smith said. “They dominated us all day, in every way. Not a lot of good things were happening for us out there today.”

Northwestern put up 433 yards in total offense compared with only 160 for Illinois. Northwestern also dominated time of possession, 41:48 to 18:12.

Perhaps the biggest surprise for Northwestern was true freshman and former cornerback Coco Azema, who led the way on the ground for the Wildcats with 123 rushing yards and two scores on just seven carries.

“I originally played running back my whole life,” Azema said. “If I could help the team, go ahead and do it. Whatever happens, happens.”

While not committing to a future in the backfield for Azema, Fitzgerald was clear the freshman will be a part of the plan. “We’ll find a place to put him on the field.”

Illinois quarterback Matt Robinson, a sophomore starting in place of Brandon Peters (out with a concussion) was 8-of-17 passing for 108 yards.

“The quarterback situation really hurt them,” Fitzgerald said. “But we’re on, what? Number four? I have little or no sympathy for (Illinois).”

Illinois had an abysmal first half and was lucky to only trail 10-7. Robinson was ineffective, going 1-of-5 passing for 29 yards, while Marty was 4 of 8 for 18 yards at the half. The Wildcats outgained the Illini 180 total yards to 30. Northwestern racked up 162 yards on the ground compared with Illinois’ 1.

Indiana 44, (at) Purdue 41 (OT):  Peyton Ramsey threw three touchdown passes and scored on a 1-yard run in the second overtime Saturday to give the Indiana Hoosiers at Purdue.

But after throwing a 14-yard completion to Peyton Hendershot on third-and-10, Ramsey hurried the Hoosiers to the line of scrimmaged, snapped the ball quickly and kept it himself as his offensive linemen helped push him around the right side and into the end zone.

Teammates mobbed Ramsey, a two-year starter who lost the job in August, following the score.

Ramsey finished 23 of 39 with 337 yards and no interceptions, running 19 times for 42 yards while scoring twice.

Purdue quarterback Aidan O’Connell forced overtime with a 20-yard TD pass to David Bell and then hooking up with Brycen Hopkins on a 2-point conversion to tie the score with 2:48 left in regulation. O’Connell tied it again at 38 with a 6-yard TD pass to Hopkins on fourth-and-goal to end the first overtime.

O’Connell was 28 of 49 for 408 yards, three touchdowns and one interception.

(At) Penn State 27, Rutgers 6: Journey Brown ran for 103 yards with three touchdowns and No. 12 Penn State pulled away from Rutgers.

Will Levis played quarterback for the Nittany Lions (10-2, 7-2 Big Ten, No. 10 CFP) in place of injured started Sean Clifford and added 108 rushing yards on 17 carries and a 42-yard touchdown pass to Jahan Dotson in the fourth quarter.

Penn State led 7-3 after a sleepy first half that featured six combined punts. The Nittany Lions took control of the game early in the third quarter.

Levis ripped off a 49-yard run on Penn State’s first play of the half to set up an 18-yard touchdown run from Brown, who bounced off defenders for his second score of the day. Penn State led 13-3 after Rutgers blocked Jake Pinegar’s extra point try.

After Rutgers’ Justin Davidovicz made a 38-yard field goal, Levis hooked up with Dotson, who spun around three defenders near the goal line to make it 20-6.

Brown capped an 8-play drive with a 1-yard touchdown run on Penn State’s next possession.

Penn State wasn’t nearly as efficient in the first half when Rutgers jumped out to a 3-0 lead on a 29-yard field goal from Davidovicz.

Penn State responded with a six-play, 76-yard scoring drive fueled by Levis’ running. He racked up 48 yards before Brown plunged in from 2 to give Penn State a 7-3 lead.