Matt Charboneau: This matchup won’t give the winner a piece of the Big Ten title, but it should put the winner in prime position early in the conference season. Much like last season’s three meetings, this one will center around the point guard battle between Michigan State’s Cassius Winston and Michigan’s Zavier Simpson. Whichever senior plays the best will likely see his team end up on the winning side. The status of Michigan’s Isaiah Livers will be critical, though, as he’s hitting 50 percent of his 3-pointers and would put pressure on the MSU defense. But MSU is in the top 25 defending the 3 and also has the benefit of being at home. Michigan State 72-65. 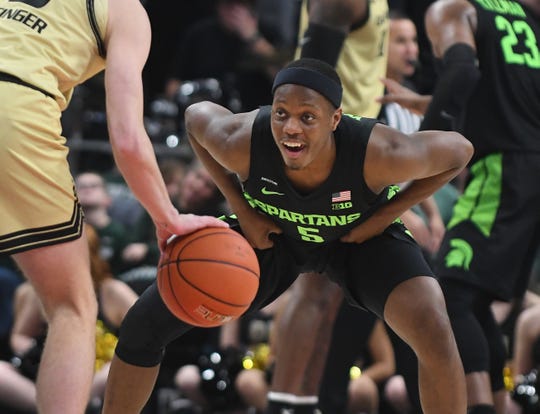 James Hawkins: Last season, Michigan struggled to defend Cassius Winston in pick-and-roll situations and struggled to attack Michigan State’s defense as the Spartans switched every screen with Xavier Tillman at the five. With Winston and Tillman both back to cause more problems, it’s up to first-year coach Juwan Howard to find a solution, which won’t be easy with Isaiah Livers unlikely to play. Michigan State 72-64

John Niyo: If Isaiah Livers isn’t on the floor, Michigan may struggle again with the Spartans’ ball-screen defense. The Wolverines need Eli Brooks and Franz Wagner to hit 3s, Zavier Simpson to finish in the paint and probably a big game from Brandon Johns Jr. in his hometown. Difficult, not impossible. The better bet is Cassius Winston & Co. celebrating another rivalry win in front of a rowdy Breslin Center crowd. Michigan State 71-62

Bob Wojnowski: Cassius Winston is doing what he does as well as anyone, scoring and distributing, and the Spartans are starting to roll. Michigan point guard Zavier Simpson again will try to slow Winston, who took over in the Spartans' three straight victories last season. It'll be interesting to see how Juwan Howard's team handles the raucous Breslin Center environment, especially without leading scorer Isaiah Livers. Big men Xavier Tillman and Jon Teske will battle to a draw, and Winston and the crowd will be the difference.  Michigan State 71-65

Michigan at Michigan State: Who has the edge