James Franklin’s deal with Penn State worth $38.2M over 6 years

The contract was agreed to by Franklin and approved by Penn State’s Board of Trustees in December. Terms of the agreement were announced Wednesday.

James Franklin’s deal with Penn State worth $38.2M over 6 years

State College, Pa. — Penn State football coach James Franklin is guaranteed at least $38.2 million over the length of a new six-year contract that runs through 2025.

The contract was agreed to by Franklin and approved by Penn State’s Board of Trustees in December. Terms of the agreement were announced Wednesday. 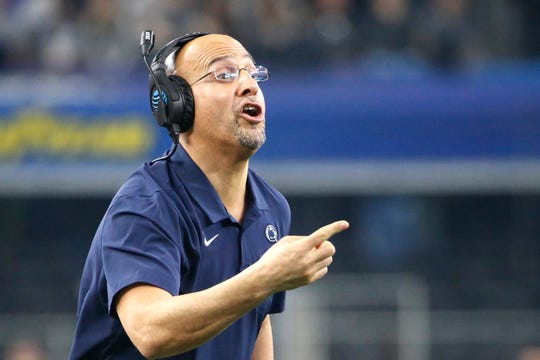 Franklin is 56-23 in six seasons at Penn State, including 34-18 in the Big Ten. The Nittany Lions have gone 11-2 with a New Year’s Six Bowl victory in three of the last four seasons.

If Franklin leaves Penn State for an NFL or college job during 2020, he would owe the university $5 million. His buyout drops by $1 million each year.

If he is fired without cause, Penn State owes Franklin the current year’s guaranteed compensation times the remaining length of the contract.