Big Ten basketball will have a new look this season with Maryland and Rutgers joining the ranks and Michigan State will do its part in welcoming the schools to the conference. 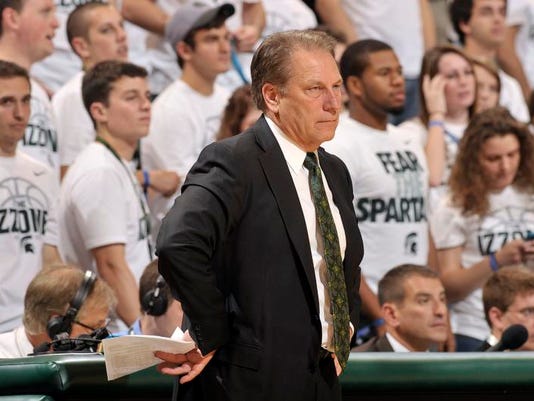 Big Ten basketball will have a new look this season with Maryland and Rutgers joining the ranks and Michigan State will do its part in welcoming the schools to the conference.

The Big Ten schedule was released on Thursday and the Spartans will face 13 opponents that appeared in the 2014 postseason, play six of their first eight games away from East Lansing, and make trips to Rutgers and Maryland in their inaugural year of Big Ten basketball, while hosting Maryland in the first ever Big Ten game for the Terrapins.

Game times and television networks for Big Ten contests and selected non-conference games will be announced at a later date.

“Our schedule will provide a tough test right out of the gates,” Michigan State coach Tom Izzo said. “With the potential of playing two Top 10 teams in the first few weeks of the season, we’ll have a good early gauge of where our team stands. Opening the season at Navy provides one of those unique memory makers that have become a staple of our schedule.

“I expect the Big Ten to be a very competitive and balanced conference, with virtually every team having legitimate postseason hopes. We’ve had a great summer as a team, and I’m excited about coaching this group of dedicated and hard-working young men this upcoming season.”

The non-conference portion of the schedule features the opener at Navy followed by a matchup with Duke in the Champions Classic in Indianapolis. The Spartans will also play in the Orlando Classic on Thanksgiving weekend where they could end up meeting Kansas.

Michigan State will also face Notre Dame in the Big Ten/ACC Challenge on Dec. 3. It is the first meeting between the Spartans and Fighting Irish since the 1979 NCAA Tournament, and the first on-campus meeting since a 76-73 Spartan victory at Notre Dame on Feb. 5, 1975.

Eight of Michigan State’s 13 Big Ten opponents appeared in the 2014 postseason, including five in the NCAA Tournament (Iowa, Michigan, Nebraska, Ohio State, Wisconsin), two in the NIT (Illinois, Minnesota) and one in the CBI (Penn State). Three Big Ten opponents (Wisconsin-No. 4, Michigan-No. 24, Iowa-No. 25) are ranked in the ESPN Preseason Top 25, while the Spartans are preseason No. 18.

The Spartans, who will be replacing three starters from last season’s team that won the Big Ten tournament championship, will host rival Michigan on Feb. 1 and then travel to Ann Arbor for the rematch on Feb. 17.