The starting wide receiver was one of the surprises on this week’s depth chart for Michigan State when he also was listed as a third-string cornerback. Coach Mark Dantonio said the move was made to bolster depth while also getting a talented player on the field as often as possible. 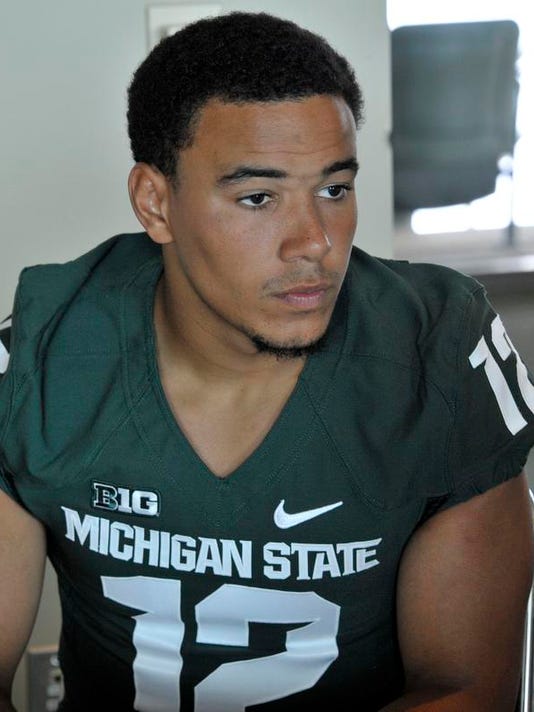 East Lansing — R.J. Shelton is all for playing both sides of the football, even if he’s just playing on natural ability.

The starting wide receiver was one of the surprises on this week’s depth chart for Michigan State when he also was listed as a third-string cornerback. Coach Mark Dantonio said the move was made to bolster depth while also getting a talented player on the field as often as possible.

“I didn’t have a problem with it,” Shelton said. “I played it in high school all four years but it was more just playing naturally. I didn’t know the steps, I was just playing to stay in front of the guy.”

But according to defensive backs coach Harlon Barnett, Shelton has all the tools to be an effective player in the secondary.

“He has natural ability on how to tackle, how to cover,” Barnett said. “You can tell he’s been taught some things and as we talked to him he told us, ‘Yeah, I was taught a few things here and there when I was in high school and played a little defensive back.’ So he’s a natural at it.”

Fellow wide receiver Monty Madaris also has been moved to cornerback, but Shelton has the better shot at playing. But how much remains to be seen considering the starters are set with Trae Waynes and Darian Hicks, while Arjen Colquhoun and Jermaine Edmondson are pushing to see the field.

Barnett admitted moving Shelton is a pretty good indication most of the incoming freshmen likely are headed for a redshirt season.

“When we get up in your face and press and play like we do, it’s a different world than what they’re used to,” Barnett said. “They’re very smart, but understand it’s just a different level and that’s all it is. If you can get away with redshirting guys, and I’m not saying that’s what we’re going to do, but if you can get away with it, the better off you’ll be as a team.”

One freshmen who does have a shot to play is Montae Nicholson. He started camp at cornerback but moved to his more natural position at safety.

But the Spartans have talent there with Kurtis Drummond, RJ Williamson and Demetrious Cox.

“Very close,” Barnett said of Nicholson. “He’s just starting to continue to get it down, the college game.”

Plan not so sharp

Not only has Michigan State never faced Jacksonville State, there is very little film on which to base a game plan.

“Any time it’s a first game of a season, and then when you add a new staff, it multiplies things,” co-offensive coordinator Jim Bollman said. “Then when you add all kinds of new players, it multiplies a little bit further. It maybe is a little different cause we can’t put on last year’s game film and see exactly what we’re gonna get. So I think you have to do some things you can adjust and everybody’s gotta understand that.”

Dantonio said junior wide receiver Macgarrett Kings is available to play Friday after being suspended during the spring for a DUI arrest.

… Barnett said Colquhoun has the slight edge on Edmondson as the third cornerback.

Michigan State has won eight of its last 10 season openers, including six of seven under Mark Dantonio.
CONNECTTWEETLINKEDINCOMMENTEMAILMORE