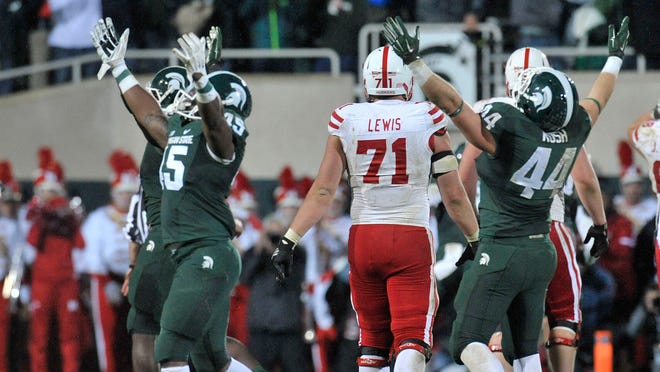 East Lansing — A year ago, Nebraska coach Bo Pelini declared his team would continue to have no problem running the ball against Michigan State.

And coming into Saturday's matchup, it didn't seem like much of a stretch. The Cornhuskers were averaging better than 354 yards a game on the ground while Ameer Abdullah was gaining 166.6 yards a game and had gone over 200 yards three times.

But Michigan State is no slouch, either, and proved it in its 27-22 victory by holding Nebraska to 47 yards on the ground and Abdullah to 45.

"Nebraska definitely came out and challenged us," defensive end Marcus Rush said. "Ameer Abdullah, Coach Bo Pelini, they challenged us that we couldn't stop the run. We came out and we did that. So I am proud of our defense, there were a lot of sudden changes. We did our job and we answered back."

At halftime, Nebraska had run for only 13 yards and Michigan State's defense was controlling the game.

"In the first half, that was the game really as far as stopping the run," defensive coordinator Pat Narduzzi said. "We shut down the run about as well as we've stopped it against these guys and that was the key to the game. We made it a passing game. They made some plays; we made some plays. … Our kids played pretty darn well today."

Middle linebacker Taiwan Jones had his best game of the season, collecting a team-high 10 tackles, including three for loss and a sack.

And when Nebraska had the ball with a minute left, the Spartans defense put the game on themselves.

Despite the late-game rally by the Cornhuskers, the Spartans' defense had them off balance for most of the game.

Nebraska quarterback Tommy Armstrong was sacked five times and was knocked out of the game at one point in the fourth quarter. The Spartans also forced two fumbles and Trae Waynes had two interceptions.

"We won the football game on defense," Michigan State coach Mark Dantonio said. "Let's call it what it is. That's a good thing to have happen to us now because we can be an elite football team. I told then at halftime. 'Hey, we've been there. We are the defending Rose Bowl champions. We are the defending Big Ten champions. We have been there, played in big games. We need to rise up.' That's what we did."