Mark Dantonio: MSU-UM rivalry 'gets in your blood'

The idea of saying this week's game for Michigan State is the same as any other is a futile effort.

Mark Dantonio: MSU-UM rivalry 'gets in your blood'

MSU football coach Mark Dantonio and quarterback Connor Cook talk about the Spartans' in-state rivalry against Michigan as the team prepares to host the Wolverines in East Lansing Saturday. 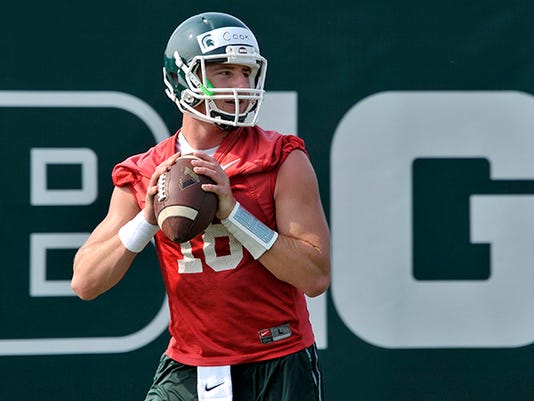 Connor Cook: “I think the main thing is the hard work mentality. … And going back to when Coach D took the job and made it a point for us to be the more dominant figure in this rivalry.” (Photo: Dale G. Young / Detroit News )

East Lansing – The idea of saying this week's game for Michigan State is the same as any other is a futile effort.

As coach Mark Dantonio said on Tuesday at his weekly news conference, the rivalry with Michigan "gets in your blood."

The coach of the No. 8 Spartans should know. He's in his eighth season as the head coach and spent six years as an assistant at Michigan State under Nick Saban and Bobby Williams. But even though Dantonio has come out on top five of the last six meetings and this season's game has the Spartans listed as a heavy favorite, the matchup hasn't lost any luster.

"Not for me,' Dantonio said. "Not for our players, and I'm sure not for them. I think it's the same."

So while things might not be big on the national stage, that hasn't changed the way the Spartans take the game. Quarterback Connor Cook explained the team's mentality, bringing back the "little brother" comments Michigan running back Mike Hart made after the 2007 game, the last time the Wolverines won in East Lansing.

"After Mike Hart made that comment and kind of upset Coach D and everyone here, (Dantonio) said to us that things were going to change," Cook said, "that we're going to come back and the tides are going to turn and there is going to be a power shift. We've done that through the years through the hard work in the offseason, the winter conditioning, the summer workouts, all that stuff. I think the main thing is the hard work mentality. … And going back to when Coach D took the job and made it a point for us to be the more dominant figure in this rivalry."

But with the latest matchup looming at 3:30 p.m. on Saturday, Dantonio was quick to mention his respect for Michigan and the job the coaches have done, going back to Bo Schembechler and Lloyd Carr.

"It is an elite program," Dantonio said. "And to be the head football coach at a place like that is difficult."