Spartans buckle down in November

'You can fade or you can move forward' in the month, coach Mark Dantonio says.

Spartans buckle down in November 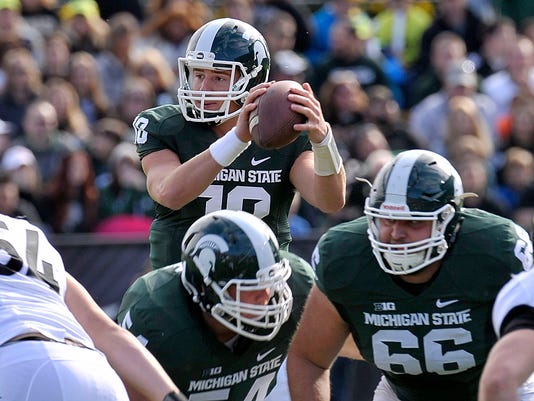 The Spartans have been outstanding in November since coach Mark Dantonio took over in 2007.(Photo: Dale G. Young, Detroit News)

East Lansing — Every team approaches a season with plenty of mantras or sayings.

Michigan State is no different.

With the final four games facing the Spartans after this week's bye, one phrase hammered home by defensive backs coach Harlon Barnett is "November is for contenders."

It's especially true for Michigan State as it sits at No. 8 in the College Football Playoff rankings and prepares for its biggest test next week against No. 16 Ohio State. It essentially will amount to an elimination game.

"The month of November really sets you apart," Spartans coach Mark Dantonio said Thursday. "You can fade or you can move forward."

"This month is the grind part of the season," junior safety RJ Williamson said.

"Everybody is nicked up, banged up, been through a lot. But it's the ones that fight through that, persevere through those things and stay strong that get to the ultimate goal they want to achieve."

After Ohio State, Michigan State finishes at Maryland, at home against Rutgers and then at Penn State.

And considering how the defense has played the last few weeks and the continued production of the offense, the Spartans are coming together just how Dantonio expects them to.

"Coach D really harps on coming out of the back end of the season even stronger than you started the season," junior linebacker Darien Harris said.

"We take that mentality into practice and film study and work that much harder because in November these games are really crucial."

Fifth-year senior punter Mike Sadler was named a winner of one of the National Football Foundation's Scholar-Athlete Awards, which includes an $18,000 postgraduate scholarship. He is one of 17 members of this year's class, chosen from 169 NCAA and NAIA semifinalists.

It makes him a finalist for the William V. Campbell Trophy, known as the "Academic Heisman" and given to the top scholar in college football.

The first three-time Academic All-America in Michigan State history, Sadler completed his degree in applied engineering sciences with a 3.97 grade-point average. He is pursuing his master's degree in public policy and has a 3.59 GPA.

While the players will have the weekend off, there definitely will be an eye toward Ohio State's game against Illinois.

Dantonio didn't plan to watch the game with his staff, but knows they'll be playing close attention.