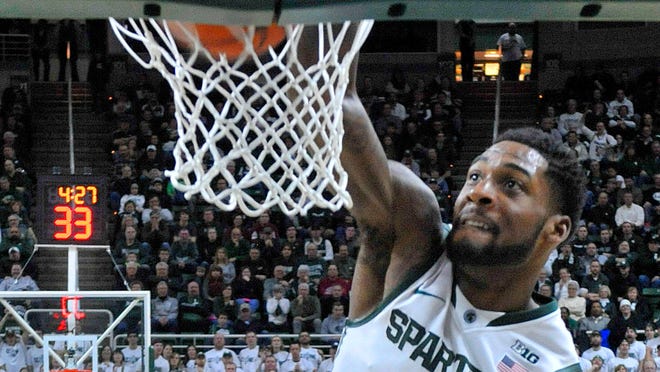 East Lansing — When Tom Izzo talks about being optimistic about his team, Monday night was evidence why.

After losing two of their previous three games and Izzo talking about the Spartans' psyche being a bit fragile, they showed no signs of any such problem by jumping all over Indiana early at the Breslin Center and never letting up in a 70-50 victory.

"That was probably one of the best halves of basketball we played," Izzo said after the Spartans led 36-17 at the break. "Indiana is gonna win a lot of games and is a good team. We caught them on a night when they were down and we had the former Izzone in here and did a hell of a job. It was a big win for us and one we really needed."

Coming into the game, Izzo stopped short of saying it was a must-win, considering it was only the second Big Ten game for Michigan State (10-5, 1-1 Big Ten). But the players believed it was and showed that against an Indiana team they have now won three straight against.

"Man, we're sick and tired of losing," junior forward Matt Costello said. "Sick and tired and we're trying to make a little run here. It was a good win and we needed it."

Junior Denzel Valentine and senior Branden Dawson were the sparks early and continued to be throughout the game. Dawson finished with 14 points and 13 rebounds while Valentine scored 15, had six rebounds and four assists. Gavin Schilling added 10 points and nine rebounds.

But as efficient as the Spartans were in transition, it was the defense, especially Dawson on Indiana's Troy Williams, that was vital early on. Williams entered the game averaging 13.6 points but was held scoreless with just one rebound.

"BJ shows up and locks down what's-his-face," Costello said of Dawson's defense on Williams. "Gives up zero points, one rebound, one turnover. He just destroys him."

That performance helped get things going early for Michigan State, which wasted little time taking control of the game in the first half.

After Indiana took an early 2-1 lead, the Spartans scored 12 straight and held the Hoosiers without a field goal for more than five minutes to take a 13-2 lead.

It was an impressive defensive performance that led to plenty of transition baskets for the Spartans. Indiana started the game 1-for-11 from the field and was just 5-for-28 in the first half as Dawson and Valentine were filling up the stat sheet.

Dawson scored eight points, grabbed seven rebounds, had two steals and a block in 17 minutes of action while Valentine scored eight, and added three rebounds and three assists. The Spartans also got solid first-half minutes from Schilling, who had seven points and six rebounds.

Indiana, on the other hand, struggled mightily.

Only Ferrell was effective, scoring nine of Indiana's 17 points. Freshman James Blackmon Jr., the Hoosiers' leading scorer at 17.2 points a game, was 0-for-8 in the first half and managed just two points on a pair of free throws. He finished the game with six points on 1-for-14 shooting.

"I don't do captains," Indiana coach Tom Crean said. "I don't put C's on jerseys because tonight I would be taking it away. Tonight our leadership was not good.

"Michigan State's help defense, year-in and year-out, is as good as anybody. This year it's right there. You let them be in help defense and you're gonna have nights like this."

The second half was much of the same as Michigan State started on a 14-3 run to take its biggest lead at 50-20.

But the Hoosiers chipped away midway through the half and cut the lead to less than 20 points when Blackmon hit his first field goal with 7:41 to play, making it 57-36 in favor of the Spartans.

Indiana continued to whittle away at the Michigan State lead, making it 61-45 with 3:12 to play on a 3-pointer from Ferrell.

But a dunk from Dawson on a nice feed from Travis Trice pushed the lead back to 18 and Indiana never got closer.

"We're not a finished product," Izzo said. "We played good against a good team tonight when our backs were against the wall and remember, he's got young team too. But I thought tonight our defense really won us the game and that led to some breaks on offense."