Branden Dawson puts in a shot in the paint in the first half as MSU hosts Ohio State Saturday afternoon February 14, 2015, at Breslin Center in East Lansing. Dale G. Young/Detroit News
Fullscreen

Branden Dawson puts in a shot over the top of Keita Bates-Diop in the first half. Dale G. Young
Fullscreen

Branden Dawson makes sure Buckeye Sam Thompson doesn't get to score when he slashes to the basket in the second half. Dale G. Young/Detroit News
Fullscreen

Branden Dawson goes high over Sam Thompson for a shot in the second half. Dale G. Young/Detroit News
Fullscreen 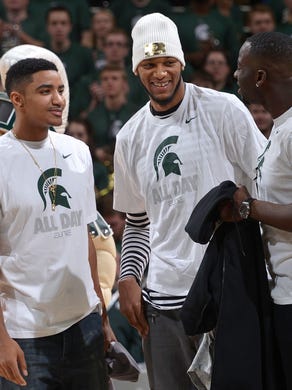 Spartan basketball alumni Gary Harris, left; Adreian Payne and Draymond Green share a laugh at midcourt as they are introduced to the crowd during a timeout. Dale G. Young/Detroit News
Fullscreen

Spartan Travis Trice drives into the paint and scores in spite of getting hammered by Buckeye Jae'Sean Tatem, left, with a little shove from Amir Williams(23). Dale G. Young/Detroit News
Fullscreen

Tom Izzo calls his Spartans together for a quick talk with a minute left on the clock. Dale G. Young/Detroit News
Fullscreen

The scoreboard tells it all, and Denzel Valentine celebrates after his game-winning three-point shot. Dale G. Young/Detroit News
Fullscreen

Tom Izzo grins when Branden Dawson makes both of his free throws to tie the game with a minute left. Dale G. Young/Detroit News
Fullscreen

East Lansing — It was a good day for Michigan State on Saturday, and only part of that was because it got a much-needed victory over Ohio State.

But getting the 59-56 win with hundreds of former players and staffers back at the Breslin Center made it all the sweeter. The highlight came when Denzel Valentine hit the winning 3-pointer and ran in front of the section where most of the former players sat, pumping his fists and screaming to the crowd.

It included his former teammates Adreian Payne, Gary Harris and Derrick Nix but spanned the decades with Draymond Green leading the charge.

"That was a huge lift," Valentine said. "Every time you run down the court you see them and we've been talking about it for two days. Day-Day has been in here talking stuff about how (D'Angelo) Russell was gonna kill us. But it was great winning in front of them. They built this place and this program, so it's huge."

Green was standing and hollering to the players for most of the game and even came in at halftime for a few pointers.

"Coming from a guy that you've gone through the grind with," senior Travis Trice said, "it means the world."

Harris and Payne practiced with the Spartans on Friday and Nix even scared Izzo a bit when he told him they had a meeting with the players.

"Nix came over before the game and said, 'Hey, we had a meeting with the team,' " Izzo said after the game. "I said, 'You did?' Scared me a little bit but no, I love what he said, he says, 'Well, Day-Day did most of the talking, I just backed him up.' And I said, 'Well, that was good.' And Gary and AP last night, they were so good and they were in the locker room before the game, and Day-Day is in there at halftime and he's just so fired up. … So we're gonna have a good time, snow or not."

And as much as the players — past and present — enjoyed the victory, Green made a point of reminding everyone that winning is the expectation.

It happened in the locker room after the game when Izzo wanted his team to savor the win.

"You start talking about the next game and we didn't do that, because we need to enjoy a moment," Izzo said "And as everybody was jumping around, Day-Day stopped everybody and reminded them, 'This is great, but this is what we do here. … Make sure that it doesn't have to be this great because you take care of your business throughout the time.' That was cool, that was really cool. Then he jumped on everybody and had fun with them.

"But just making people understand, the Andre Hutson line is, 'This is what we do here.' And we've done it here a long time. And yeah, we've slipped up a little bit this year, but not a lot when you really think about it. … We're still a long ways to go from where we need to be, but we have definitely made a step in the right direction."

Izzo is absolutely changing with the times and the final minute of the game was a prime example.

After Sam Thompson tied the game at 56, Michigan State brought the ball up the court with less than 30 seconds to play. It's usually the time Izzo calls a timeout, only this time he didn't.

He did call a timeout against Maryland before the Spartans lost and didn't call timeout earlier this season against Michigan and the Spartans won in overtime.

"We had talked about it earlier on a play I wanted to run, just a high ball-screen and have Travis come off it, and then the screener, instead of re-screening, he went and screened for Zel coming off a double," Izzo said. "Those guys ran it well. You're right, I always have (called timeout). This year I'm one-for-one. I didn't and we lost, and one game I didn't and we won."

Izzo also never fouls late when up three points. It hurt them in the loss to Maryland and Izzo insists he told his player to foul against Ohio State. It never got to that because the inbounds pass was knocked away.

"I thought I knew what they would run," Izzo said. "I told them they would catch it, take a dribble, then foul them on this side of half court. I don't know. It was just the thought. A couple players felt good about it. I talked to my staff, they did. It wasn't like we never work on it, but I can't say we work on it a lot. I usually think our defense is good enough. Sometimes, you do things within the moment, too."

Izzo said freshman Javon Bess might not be out for the rest of the season after soreness in his surgically repaired right foot forced him to the bench last week.

"We did have him meet with some doctors and it wasn't quite as bad," Izzo said. "Everything seems to be right except it just didn't quite heal in one part. So they're gonna keep him out a couple weeks and then make some decisions. It was actually a little bit of positive news on Thursday night. And, boy, that would help us if we could get some minutes out of him."

Branden Dawson had five blocks and tied Green for third in MSU history with 117.

Ohio State coach Thad Matta was asked about criticism the Michigan State senior receives at times and didn't hold back.

"My question is who in their right mind, with a brain, would criticize Branden Dawson?" Matta said. "You have to be a moron to criticize that kid. You wouldn't even know anything about basketball if you criticize Branden Dawson. I think from what he's done in his career for Michigan State, I think of all the great players I've coached against and he's one of them.

"He probably had a chance to leave and came back. He's an energy guy. He plays with great passion. He goes and gets the ball."