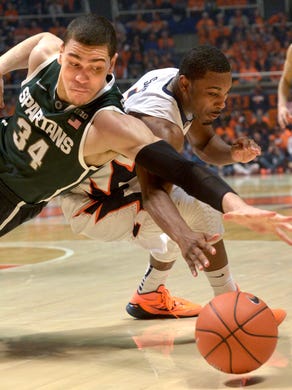 Champaign, Ill. – When Michigan State and Illinois played 15 days ago at the Breslin Center, Tom Izzo was steaming.

His team lost at home, but he was especially upset at the way Illinois was the tougher team and he vowed that wouldn't happen in the rematch Sunday at the State Farm Center.

"We owe them one," Izzo said on the pregame show. "We felt they took it to us at our place. We're a better team now."

The Spartans made their coach look good by outpunching the Fighting Illini in what amounted to a fistfight, earning a 60-53 victory and moving back into a tie for second place in the Big Ten with Maryland and Purdue.

It was the fourth straight win for Michigan State (19-8, 10-4 Big Ten) and the sixth in the last seven games for a team that is hitting its stride with just four games left in the regular season.

"To say that was a big win for us would be the understatement of the century," Izzo said. "Man, I thought we beat a good team. I mean that was the hardest, most physical game that we've been involved in, it reminded me of the Purdue-Michigan State games of 12 years ago. It was two teams battling for their lives."

"Obviously that was a heavyweight boxing match," Groce said. "It was a very physical basketball game and I kind of anticipated that. They played really hard, very aggressive and really physical. That was two good teams really going at it."

Denzel Valentine scored 20 and Travis Trice had 18 for Michigan State while Branden Dawson added 13 points and seven rebounds. And with the physical nature of the game, the Spartans had to be efficient from the free-throw line, something that has hampered them all season.

They answered by going 17-for-20 from the line, good for 85 percent, their best showing of the season.

"Two things happened," Izzo said. "Our best players – Travis, Denzel and BJ – were unbelievable and Travis was at his best. And to shoot 85 percent from the line is normal for Illinois but very abnormal for Michigan State."

But after the first half, the Illini were able to stay close to the Spartans but never get over that hump.

Michigan State went up by six early in the second half when Valentine hit a 3-pointer to give the Spartans a 29-23 lead. It was a margin they would work with for quite some time as the teams paraded to the free-throw line with both in the double-bonus at the 8:12 mark.

Each time Illinois would cut the margin to four, Michigan State would push it back to six.

That scenario continued until Kendrick Nunn split a pair of free throws and Valentine hit a deep 3-pointer over the zone to give Michigan State a 49-41 lead, its biggest of the game at that point, with 5:56 left in the game.

Trice then split a pair of free throws to push the lead to 50-41 and after a defensive stop, Trice split the Illinois defense for a layup and a 52-41 lead with 4:43 to play.

"It was a dogfight to the end and they wouldn't go away," Valentine said. "We were trading baskets for so long and we finally got a lead when I hit that three and here they come back again. I'm like, 'Oh my god, they don't go away.' "

They sure didn't, forcing turnovers with some full-court pressure and going on an 8-0 run to cut the Michigan State lead to three with 1:20 to play.

"We did make some foolish turnovers down the stretch," Izzo said. "We just had some guys that played a lot of minutes, BJ was just a little tired at the end. The foul trouble to Gavin (Schilling) and Matt (Costello) hurt us in the middle."

But that's when Michigan State did something it hadn't really done all season – put the game away with free throws. Valentine was 4-for-4 in the final minutes and Trice was 2-for-2.

"I just felt like tonight we needed a win," Trice said. "We knew we needed a win and had to do it no matter what. … They beat us last time at our place and we felt like we didn't play well and they out-toughed us, so it was extra motivation for this game.

"But we're on a roll right now and we're playing well so we just want to keep this thing rolling."