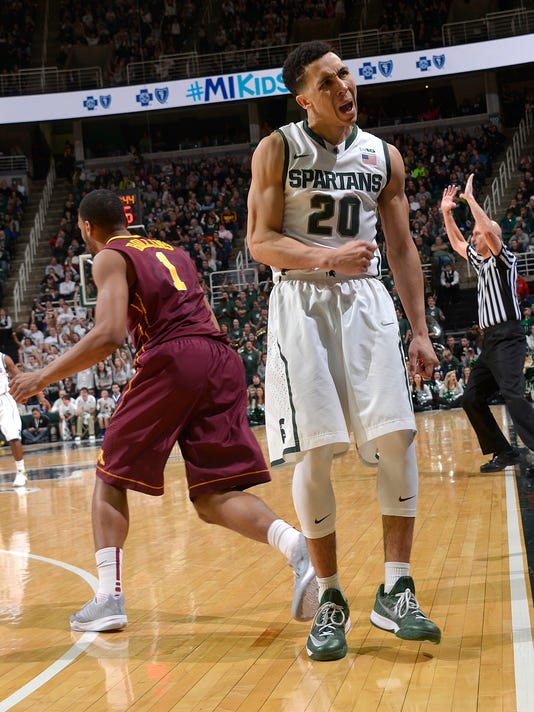 East Lansing — In the early years of Tom Izzo's coaching career, it was a lot easier to get rid of game tape he didn't especially want to review.

In fact, the Michigan State coach has famously used hand tools to smash them to pieces in the midst of a season.

Less than 24 hours after Michigan State's overtime loss to Minnesota at the Breslin Center —a game in which the Spartans lost a six-point lead in the final 30 seconds — Izzo was using a figurative hammer to eliminate the video evidence of a game that still had the team hurting on Friday afternoon.

"I've ordered my video guy to delete that from the computer," Izzo said after the Spartans went through a light practice. "Which means it will still be there because we know that once it goes into the computer they're there for life, but it won't be on my computerr. I'm getting a special exemption and I'm getting rid of it.

"I just didn't like anything about it and I saw enough in person. To be honest I didn't look at the film, I don't need to look at the film, so I went on to Wisconsin because we have such a quick turnaround with the traveland that's what I did last night."

Michigan State (19-9, 10-5 Big Ten) will spend plenty of time over the next day-and-a-half on preparing for Sunday's trip to first-place Wisconsin, but it was still hard to shake what transpired on Thursday.

And a visiting team hadn't scored in the 90s at Breslin Center since Purdue beat Michigan State, 99-96, in overtime in 1998.

Senior guard Travis Trice put the blame on himself after going 6-for-13 from the free-throw line and sophomore center Gavin Schilling was distraught over fouling Minnesota's Carlos Morris on the tying 3-pointer with 2.2 seconds to play.

But Izzo emphasized, again, the loss wasn't because of those players or those specific plays.

"Trice's free throws didn't lose the game," Izzo said. "Gavin's defense of the 3-pointer didn't lose the game. They could have won the game, but they didn't lose the game. The game was lost because we guarded fricking nobody, and some key defensive people did not guard. You give up 96 points at home, 78 in regulation, you don't deserve to win. So we can second-guess all the other things and I agree with them. But sooner or later, you're Michigan State, you should be able to guard people because you've done it pretty much all year on a fairly consistent basis."

Michigan State won't have much time to get things figured out with No. 5 Wisconsin up next. The Badgers (25-3, 13-2) are coming off a loss at Maryland but can clinch a share of the Big Ten championship with a victory. Add in the fact it's senior night at the Kohl Center, and there will be plenty of motivation on both sides.

"There is a lot on the line for them so that will add to the intensity," Trice said.

"I'm just glad it's the next game — home, away, neutral. Just another game feels good right now and I'm happy it's a quick turnaround."

Trice said the focus had returned by Friday afternoon for the entire team and that will be vital in a series that has included its share of big games. Michigan State has won six of the last seven against Wisconsin and relishes the chance to play with so much at stake for the Badgers.

"That's what these games have been now for quite a few years," Izzo said. "It's two teams that have battled for championships and I'm really looking forward to see if a couple of my guys that didn't compete last night will compete in this game. That's gonna be as interesting as anything. We are looking to go in there and win a game."

"They've ruined a couple of our days here in the past, so maybe we can ruin the party," Izzo said.

Denzel Valentine hurt his ankle early in the Minnesota game but still managed a career-high 27 points and seven rebounds.

On Friday, Valentine said he wasn't 100 percent but won't be limited and would have been able to practice fully, even if the Spartans had done more than film work and walk-throughs.

"Yeah, it was a little sore today," he said, "but I would have got through (practice)."