It will be no easy chore replacing more than 1,500 yards and 22 touchdowns that Jeremy Langford produced last season. 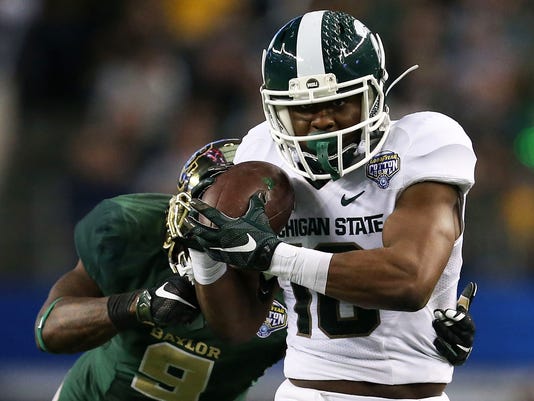 It will be no easy chore replacing more than 1,500 yards and 22 touchdowns that Jeremy Langford produced last season, but the Spartans feel they have the talent to do just that. Junior Delton Williams has the most experience, but he is coming back from an offseason suspension and is lagging behind in the competition. Sophomore Gerald Holmes has seen limited action in his first two years but has been solid throughout camp, as has redshirt freshman Madre London. The player to watch could be true freshman LJ Scott. He is constantly being compared to former Spartan Le'Veon Bell, and if he comes close to producing the same, Michigan State's running game will be in good shape.

The Spartans lost one of their most productive receivers when Tony Lippett, who had 1,198 yards receiving and 11 touchdowns last year, left for the NFL. There is still experience and talent with the receivers, the question will be which one emerges as quarterback Connor Cook's favorite. Senior Aaron Burbridge might be the most talented among the group but nagging injuries have kept him from reaching his potential. And fellow senior Macgarrett Kings Jr. expects to be a playmaker, along with junior R.J. Shelton. After that, it's a battle of inexperience with fifth-year seniors AJ Troup and DeAnthony Arnett likely to see time. Junior Monty Madaris is coming off a solid spring and there's a chance true freshmen Felton Spencer and Darrell Steward Jr. could break through.

While there are questions at running back and receiver, there are no such concerns along the offensive line. It is one of the best groups in the Big Ten, if not the country, and should give Cook plenty of time while opening holes for whoever carries the ball. Fifth-year senior Jack Allen anchors the group and could be headed for an All-American season while junior left tackle Jack Conklin is on the verge of greatness and projects as a high first-round pick in next spring's NFL draft. Fifth-year senior right guard Donavon Clark and junior right tackle Kodi Kieler have both been steady. Sophomore left guard Brian Allen, the younger brother of Jack Allen, is showing he intends to follow in the footsteps of the Spartans' center.

Junior Josiah Price is coming off an honorable mention All-Big Ten season and could be establishing himself as one of Cook's favorite targets. He had 26 grabs for 374 yards and six touchdowns last season and is on the Mackey Award watch list for the nation's top tight end. But Price is just one part of MSU's tight end tandem. Junior Jamal Lyles has seen limited action but might be the most gifted player at the position. He runs well for 6-foot-3 and 263 pounds, and has soft hands while figuring to add significantly to his 10 career receptions for 132 yards.

It never hurts to go into a season with an experienced quarterback, and the Spartan have just that with Cook. The fifth-year senior has a 23-3 mark as a starter, including 16-1 against Big Ten opponents and 2-0 in bowl games. He threw for more yards (3,214) last season than any other quarterback in the Big Ten and enters 2015 with an outstanding offensive line in front of him and potentially plenty of weapons. He won't have the comfort of Lippett on the outside and Langford behind him, but Cook's understanding of the offense should aid the young skill players and lead to another offensive output on par with last season's record-setter, when the Spartans scored a school-best 559 points and piled up 6,510 yards of total offense.