Connor Cook not one of three MSU captains

Michigan State wrapped up preseason camp by going through its final practice and naming this season's captains.

Connor Cook not one of three MSU captains 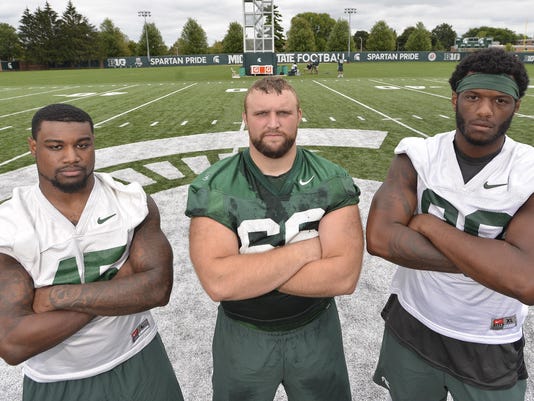 He was joined by a pair of fifth-year seniors — center Jack Allen and linebacker Darien Harris. Both were solid choices, but the surprise — if there was any — was quarterback Connor Cook was not selected.

The fifth-year senior who is 23-3 as a starter, wasn't voted a captain last year, either. He is, however, a member of the 12-person Eagle Council, the team's leadership group. Members of that group will rotate each week as a game-day captain.

"Connor Cook is our quarterback, he drives the car," coach Mark Dantonio said. "I don't think there is any question about that. ... It's unfortunate you can't vote more people in, but I've always tried to say we're gonna keep three because I want that fourth guy to rotate. I want all of our guys to get that opportunity to walk out there and be a part of that process."

Calhoun, the fourth player under Dantonio to be named a captain more than once, said Cook has made strides as a leader.

"Connor did a great job in the summer, and you'll see this year he has great leadership on the field and great leadership off the field," Calhoun said. "He has definitely improved from last year, and it's not always about a title with us."

The three players who were named captains are all unique.

Calhoun is the outgoing player who is quick with a smile and has an energetic personality. But as his teammates can attest, the Big Ten's top defensive lineman from 2013 is serious on the field.

"He's a tremendous competitor," Harris said. "Every day is game day for him. And he has that personality people gravitate toward. He just loves life and we feed off that as a team."

"I think once you've been elected captain as a junior, that second year you're going to only probably increase what's been going on," Dantonio said. "Usually it's a senior-dominated type thing. Last year, (Calhoun) became a captain and he did a great job with it. He's a man of action. There's no question about that."

Allen is a man of action, too, though as an offensive lineman he isn't noticed quite as much. And Allen has the same, business-like demeanor of his coach. He joked, however, his leadership skills would be different if his brother — sophomore Brian Allen — was the only guy on the team.

"We're not allowed to swing at each other, so I won't be doing that," said Allen, who admitted the camera doesn't love him like it does Calhoun. "Maybe if it was just Brian."

Allen's workmanlike attitude, however, is what Dantonio admires.

"He epitomizes what we're trying to do in terms of effort and toughness," Dantonio said. "He's rock solid as a person."

Harris is more soft-spoken, but has done it all in five years in East Lansing, something that gives him a unique perspective, Dantonio said.

"And he's a dynamic person and a very good football player."