Spartans safety RJ Williamson stops Air Force running back Jacobi Owens (28) again short of the goal line as the Falcons give up the ball on downs. Dale G. Young
Fullscreen 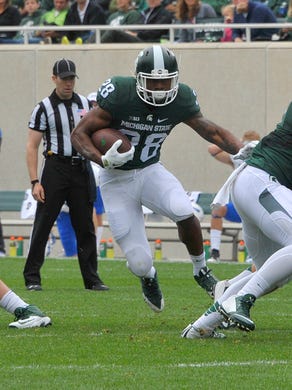 Spartan Aaron Burbridge (16) puts his foot down in the end zone as he catches a touchdown pass in spite of defender Kalon Baker (4). Dale G. Young, Detroit News
Fullscreen

Air Force running back Jacobi Owens fumbles the ball, but gets it back for a 7-yard loss with Spartans defender RJ Williamson on him. Dale G. Young, Detroit News
Fullscreen 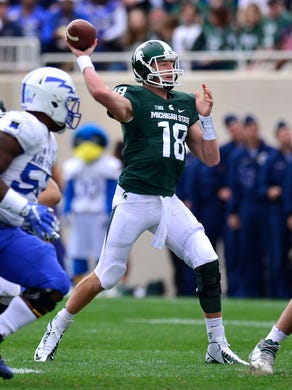 Spartans coach Mark Dantonio gives a thumbs-up to his defense in the fourth quarter after it stopped Air Force on the goal line. Dale G. Young
Fullscreen

Freshman linebacker Andrew Dowell (5) comes up with a big turnover to the delight of his defensive teammates. Dale G. Young
Fullscreen

Spartans fans cheer in the fourth quarter, waiting for a response from the other side of the field. Dale G. Young, Detroit News
Fullscreen

Fans in the student section come ready for a super day for the Spartans. Dale G. Young
Fullscreen

After being ejected, Spartans linebacker Riley Bullough (30) makes his way out of the stadium as the fans applaud. Dale G. Young, Detroit News
Fullscreen

Spartans safety RJ Williamson (26) had a big game for the Spartans defense, returning a fumble 64 yards for a touchdown, grabbing an interception and making five tackles. Dale G. Young
Fullscreen

Fans try to get the attention of Macgarrett Kings (85) as he leaves the field after Michigan State's 35-21 victory over Air Force in East Lansing. Dale G. Young
Fullscreen

He was the top player in the state as a senior at Farmington Hills Harrison and played as a true freshman for the Spartans in 2012, even producing an eight-catch, 134-yard game in a victory over Indiana.

But nagging injuries and the emergence of Tony Lippett and others the past two seasons had Burbridge playing nothing more than a supporting role. He was a player with unlimited potential, but had yet to reach that potential.

It appears those days are over.

Burbridge caught eight passes for a career-high 156 yards and three touchdowns, also a career-best, in Saturday’s 35-21 victory over Air Force. It was the third straight game Burbridge went over the 100-yard mark after doing so against Western Michigan and Oregon.

“I’ve always thought Aaron Burbridge is an outstanding receiver, and we’ve had a lot of good receivers here,” Michigan State coach Mark Dantonio said. “What he does is he gets those 50-50 catches, those difficult catches, those acrobatic catches. People are hanging on to him and he’s making the play. Great game, and big plays.”

The most impressive was his 28-yard touchdown in the second quarter that gave the Spartans a 21-7 lead. It was first called incomplete but replays showed Burbridge got his foot down while making the grab and falling out of bounds.

“Amazing,” quarterback Connor Cook said. “I tried to put it outside in a safe spot where only he could get it and to see him go up and reach back and to still keep his foot in bounds — an awesome catch.”

Burbridge, who said he hasn’t had three touchdowns in a game since he played junior varsity at Harrison, was more matter-of-fact about the play.

“I did make a catch but I don’t think it was too spectacular,” he said. “I had to make the play, I went up for it. It landed in my hand. I knew I was in. I ran my route, he sent the ball in there late, so I’m just running. Then my hands were out and I caught it and tried to get a foot down. Then I’m watching it on the replay and I stood up and put my hands up.”

It wasn’t just that play. Burbridge was a thorn in the Falcons’ side all game.

With the Air Force defense taking chances at the line of scrimmage, it opened things up for the passing game.

“They were in man coverage a lot of those times that they were blitzing,” co-offensive coordinator Jim Bollman said. “Some of them were all-out blitzes. Granted, it gave him a little bit more room than he might have had.”

He took advantage, adding a 32-yard touchdown later in the second quarter and a 21-yarder in the third.

“He’s the top receiver in the nation, one of the top,” Air Force cornerback Roland Ladipo said. “He got the best of me sometimes and you just have to move on to next week and learn from it. Top players make those plays sometimes. … I thought I had a pretty good press coverage on him, but he made the play.”