Follow the action here with live updates throughout the game by Tony Paul of The Detroit News.

Michigan State running back LJ Scott runs through the outstretched hands of Purdue defensive tackle Jake Replogle for a long first down in the first quarter. Scott ran for 146 yards and two touchdowns in the game. Dale G. Young, Detroit News
Fullscreen

Purdue linebacker Andy James Garcia bats the ball out of the hands of Michigan State tight end Jamal Lyles (11) in the end zone to stall an MSU drive and force a field goal in the fourth quarter. Dale G. Young, Detroit News
Fullscreen

Michigan State punter Jake Hartbarger fumbles the ball while being tackled by Purdue's Gelen Robinson (13), allowing Purdue to take possession of the ball on the MSU 36-yard-line, and setting up Purdue's first touchdown of the day. Dale G. Young, Detroit News
Fullscreen

Michigan State running back Connor Cook unloads a long pass in the fourth quarter. Cook went 13 for 19 for 139 yards and a touchdown on the day. Dale G. Young, Detroit News
Fullscreen

Michigan State receiver R.J. Shelton leaps through a gap in the line in the fourth quarter. Shelton had 42 yards in total offense and a touchdown for the day. Dale G. Young, Detroit News
Fullscreen

Michigan State cornerback Arjen Colquhoun (36) celebrates on the sideline with his teammates after breaking up the fourth-down pass that was Purdue's last chance, as MSU defeated Purdue, 24-21, on homecoming weekend. Dale G. Young, Detroit News
Fullscreen 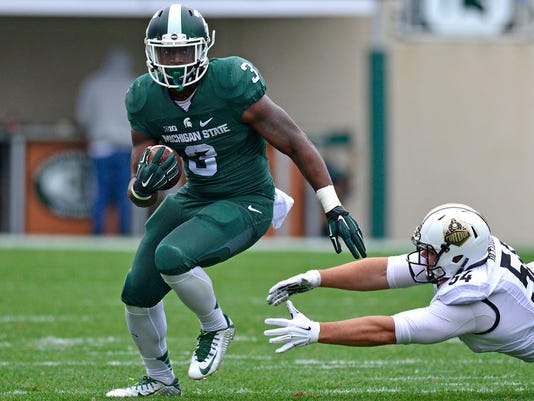 Another close game -- and another MSU victory.

No. 2 MSU improved to 5-0 on the season with a 24-21 victory over Purdue on Saturday afternoon at Spartan Stadium.

The Spartans led 21-0 after the first half, but let things slip away in the second half when Purdue quarterback David Blough started making some good throws and running back Markell Jones started getting some room to run.

Purdue had one last chance for the victory late in the fourth quarter, with Blough picking up a first down with his legs on third-and-10, and then MSU handing Purdue a first down with a costly holding penalty.

But a big false-start penalty hurt Purdue, and Blough was errant on his final three passes.

MSU has yet to destroy an opponent this season, a big issue for critics. It'll be interesting to see if the Spartans fall in the AP rankings Sunday, as this was a way-to-close-call against a far-inferior opponent.

MSU's next game is next Saturday, at Rutgers.

The eyes of the nation are upon this game now, even if there's not many eyeballs in the Spartan Stadium seats anymore.

Purdue answered MSU with another touchdown drive -- its third of the half -- to cut the Spartans' lead to 24-21 with 6:44 left in the ballgame.

Purdue quarterback David Blough is really making some excellent throws, and had several on a seven-play scoring drive -- including 20- and 14-yarders to Danny Anthrop and a 35-yarder to DeAngelo Yancey, who made a spectacular catch with Darian Hicks playing tight defense.

Purdue running back Markell Jones punched the ball in from the 3-yard line for another touchdown.

Jones is having a huge day, with 157 rushing yards on 21 carries.

Blough has only thrown for 126 yards, but more than half of that came on that big drive that took just 3 minutes, 5 seconds.

Just when the game was getting tight, MSU went back to what worked so well in the first half.

The Spartans ran six consecutive plays, and it worked, thanks to another big run by LJ Scott (30 yards) and one by Madre London (18) on the very next play to get MSU in scoring position.

The drive, though, fizzled when Connor Cook threw an incomplete pass on third down.

This time, Michael Geiger made the 30-yard field goal, which was much easier than the 35-yarder he missed earlier -- in that it was downwind.

That puts the Spartans up 24-14 with just less than 10 minutes left.

The fans left, and apparently so did Michigan State's momentum.

After leading 21-0 at the half, it's now 21-14 early in the fourth quarter after Purdue came up with a huge play -- aided by another untimely MSU penalty.

And on the second play of that set, Purdue's heavily used running back Markell Jones busted a 68-yard run right up the middle for a touchdown. He high-stepped out of reach of the last Spartans tackler to have a shot at bringing him day.

And just like that, that makes this a one-score game with about 14 minutes to go.

No. 2 Michigan State is officially on upset alert here in East Lansing.

This game is probably a little more interesting than Michigan State was hoping for.

Michigan State's lead was cut down to 21-7, and that's where it stayed when Michael Geiger missed a 35-yard field goal that was tougher than the yardage suggested -- considering the rainy, windy conditions. The kick was into the wind, and he whiffed wide left.

A bad illegal formation penalty really cost MSU on the drive, as it came when Madre London appeared to have picked up a first down deep in Purdue territory.

Instead, it made it third-and-six for MSU. London couldn't pick up the first down, forcing the Geiger attempt. And it didn't go well.

Connor Cook had a big drive, with his legs. He began the drive with a 13-yard run, and later added a 22-yard scamper on which he didn't slide. He took the hit, popped right up and pumped his fist, to the delight of the crowd that's still braving this weather.

Purdue has the ball to start the fourth quarter.

A score here, and things could get interesting. Too interesting for MSU's liking.

Purdue gets on the board

The crowd emptied out of Spartan Stadium at halftime, thanks to strong winds and rain.

And Purdue finally has gotten on the board, using a mishandled snap on an MSU punt to set up a touchdown. The Spartans now lead, 21-7, a little more than halfway through the second quarter.

MSU lined up to punt on its second possession of the second half, but punter Jake Hartbarger couldn't handle the snap.

He fumbled, Purdue recovered, then Purdue fumbled, MSU recovered, then MSU fumbled again. Refs ruled correctly Purdue never had possession, so the Boilermakers kept the ball d started at their own 21. Quarterback David Blough had a big 8-yard run and a couple key passes, including a 6-yarder to tight end Jordan Jurasevich that put Purdue on the 1.

Blough then found Gregory Phillips with a pass in the corner of the end zone.

Let's see if MSU sticks to its running game here, or if Connor Cook tries to create something through the air in these brutal conditions.

That was a pretty impressive first half from Michigan State, which leads Purdue, 21-0, at the break.

The defense, which isn't what its been in recent years, put on a clinic early, with three forced turnovers -- two fumbles and an interception. The two fumbles both led to Michigan State touchdowns.

Malik McDowell has a sack and a forced fumble.

LJ Scott leads the Spartans on the ground, with 66 yards and two touchdowns on eight carries.

Quarterback Connor Cook also has been awfully efficient on a nasty, rainy day here, going 10-for-12 for 128 yards and a touchdown.

The first half ended on a sour note for Michigan State, which lost left tackle Dennis Finley to a seemingly nasty right leg injury.

He was caught before Madre London and Purdue defenders on a Spartans rush, and medical staff immediately called for the cart.

With a brace on his right leg, Finley was sitting up on the cart and he gave the crowd a fist pump as he was driven off the field.

There are a lot of standout performances in the making today.

Keep an eye on sophomore nose tackle Malik McDowell, who had a big sack earlier, and then early in the second quarter, forced a fumble by Purdue quarterback David Blough.

Just like the first, the Spartans took advantage with a touchdown drive, with Cook completing four passes in the process.

He found Paul Lang on a 12-yard hit and AJ Troup for 19 yards to get MSU deep in Purdue territory.

Then, he flicked a forward pass to R.J. Shelton, who found all sorts of open space around the end for a 23-yard score and a 21-0 Spartans lead.

The drive covered 64 yards on six plays and just 3 minutes and 15 seconds.

LJ Scott is having quite a day, and the first quarter is just coming to an end.

MSU went 94 yards for a touchdown, with Scott adding to his own highlight reel all the way down the field.

After he broke a tackle for his first touchdown of the day, he did a nifty spin move to avoid a tackle for a big 22-yard run that put MSU in scoring position for another score.

With MSU at first-and-goal from the 8, Connor Cook handed the ball to Scott three times, and he finally pounded his way in from the 1 as MSU leads Purdue, 14-0, late in the first quarter.

Cook had a big play on the drive, too.

Pinned deep, he fired a strike to Monty Madaris, who went diving the ball and came up with it for a big 34-yard game. The next play, Shelton did his magic. R.J. Shelton  followed with an 11-yard run, and Scott took care of the rest.

MSU could use a blowout to pump up its stock, and this game sure has the makings of one.

Just as Purdue, behind Markell Jones, was gaining some momentum on the ground, quarterback David Blough fumbled and MSU's Joel Heath recovered, putting the Spartans in prime position to take the lead.

And that's exactly what they did when LJ Scott broke a tackle around the 17, regained his balance and scampered into the end zone.

MSU was forced to punt on its opening drive, and pinned Purdue at the 4-yard line. But the Boilermakers quickly picked up a pair of first downs, on 6- and 11-yard runs by Jones.

Then Blough fumbled, to the delight of the late-arriving crowd on a gloomy, cold Homecoming Day in East Lansing.

It's a milestone day here in East Lansing, where Michigan State is playing its 100th homecoming game. As part of the celebration, interestingly, the "MSU Fight Song" is being renamed "Victory for MSU" today.

Purdue is Michigan State's opponent, and comes in 1-3.

Michigan State enters 4-0 and ranked No. 2 in the nation, though there is some controversy surrounding that ranking, seeing as how Michigan State really hasn't steamrolled an opponent this year, not Western Michigan, not Oregon, not Air Force and not Central Michigan.

Will today be the day Mark Dantonio's bunch finally lays the hammer down?

We'll find out soon enough, as kick off is at noon.

Follow all the day's action here in The Detroit News game blog.