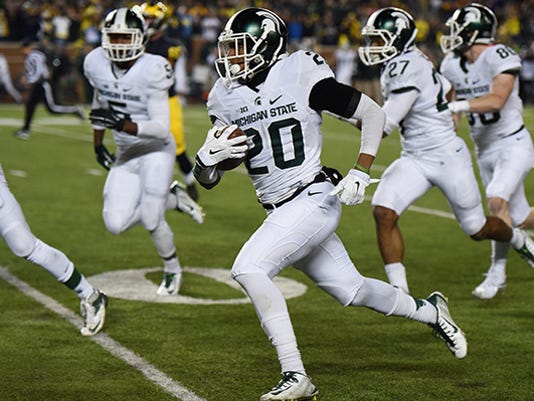 Jalen Watts-Jackson runs toward the end zone on the final play of the game against Michigan on Oct. 17 last season. It was a 38-yard return on a botched punt to give the Spartans a shocking 27-23 win.(Photo: Melanie Maxwell, AP)

When Michigan State safety Jalen Watts-Jackson crossed the goal line at Michigan Stadium last weekend, the touchdown he scored on the final play of a 27-23 victory cemented his spot in Spartans history.

When he yelled out as he hit the ground, however, it wasn't in celebration.

The redshirt freshman suffered a dislocated hip that led to surgery Sunday. But he was on his way back to East Lansing by Monday and declared it was a price he would be willing to pay all over again.

"Very bittersweet end to my season," he posted on his Instagram account. "This morning I had surgery on my hip putting me out for the season. But if I got the chance I would do it all over again for my brothers. God has a plan for everyone and I will not question any obstacles I encounter on my journey. #spartanswill."

It has been a whirlwind few days for Watts-Jackson and his family. He never saw a replay of the final sequence of the game until a day after it happened.

The best news, however, that the injury likely won't end his career.

"At first they thought it was a Bo Jackson-type injury but it turned out it's not that severe," said Rick Jackson, Jalen Watts-Jackson's father. "It's not career-ending as of right now."

Bo Jackson played in the NFL and baseball, but a hip injury suffered with the Raiders ended his career prematurely.

"He'll have to be light on it for at least a couple of months," Jackson said of the injury. "They popped the bone back in on the field, and that was a good thing. He was in a lot of pain but on the way to the hospital the ambulance hit a bump and knocked it back in place and he wasn't in pain anymore. So when we got to him that night he was actually pretty comfortable."

It was the second serious injury of Watts-Jackson's career. During practice for the Cotton Bowl last season, he suffered a dislocated shoulder making a tackle. It kept him out during the spring.

He'll be in the same position now, and his dad joked he should take up golf.

But, Jackson knows that won't be the plan for his son, and that's why he was there last Saturday. But Rick Jackson was one of the few at Michigan Stadium who didn't see what happened. He was headed out of the stands early, only to look back while walking up the aisle when the crowd reacted. The only thing he saw was the pile of players in the end zone.

"I turned to head up the bleachers and turned back and everyone was running out on the field," Jackson said. "It happened that fast.

"I didn't know it was Jalen and I most definitely didn't know he was hurt until after the game. I usually go meet him at the tunnel and he wasn't at tunnel. That's when they told me he had gotten carted off to hospital so the Michigan police took us over to the hospital where he was."

Watts-Jackson told his dad the injury happened as Michigan tight end Jake Butt was tackling him near the goal line.

"The Michigan kid was doing what he is supposed to do and tried keeping him from scoring," Jackson said. "He grabbed Jalen's legs so as Jalen was going forward and he's pulling back, that is what caused the dislocation, not so much the team piling on him.

Since the injury, Watts-Jackson has mostly been surrounded by family and his spirits have been low key. But now that he'll be back on campus, Jackson believes his son will start to appreciate what happened.

"Jalen is kind of a laid-back kid, so he hasn't been all hip-hip-hooray celebration," Jackson said. "I don't think the moment really hit him yet, maybe when he gets back up to school and around the players his spirits will get a lot higher."

Watts-Jackson didn't see a replay until Sunday, his dad said, and the idea he is part of one of the biggest plays in Michigan State history should provide some solace.

"We've had a lot of finishes like that," coach Mark Dantonio said. "If you go back to Keith Nichols' catch against Wisconsin, the 'Little Giants' play, this one. We've had a belief system and it doesn't mean it always happens. … We just find a way."

It's also a play that will be at the top of some other iconic Michigan-Michigan State moments — the last-second pass from Jeff Smoker to T.J. Duckett in 2001, the Larry Caper overtime run in 2009 included.

Once Watts-Jackson settles in on campus, he'll commiserate about his injury with roommates Vayante Copeland and Madre London, two other injured Spartans. And he'll be surrounded by teammates who already have rallied with support.

"Jalen, everyone loves him," offensive lineman Brian Allen said. "To see that happen for him, it's awesome."

And, Jackson hopes his son gets a chance to relish in the moment, something he hasn't been able to do yet.

"I want him to enjoy the moment," Jackson said. "We didn't really celebrate because he got injured, but now he's OK. It's unfortunate that he is out for the season, but we got a big win. Now it's about him getting a speedy recovery and getting back out there.

"He'll be happy then, more than happy."