Connor Cook finished 19-for-26 for 248 yards, including three touchdowns, as Spartans rolled to 55-16 victory to close out regular season. 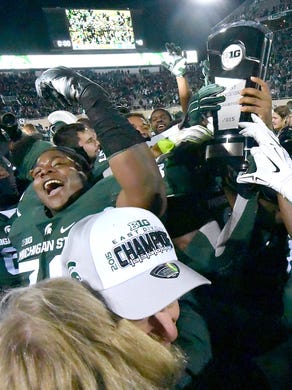 Michigan State players charge out of the tunnel and onto the field. Dale G Young, Detroit News
Fullscreen

MSU's R.J. Shelton drags a host of Penn State defenders with him on his way to a first down. Dale G Young, Detroit News
Fullscreen

MSU's Aaron Burbridge pulls down a pass and gets the first down in spite of John Reid (29). Dale G Young, Detroit News
Fullscreen

MSU's Aaron Burbridge leaps over a tackler on his way to a first down. Dale G Young, Detroit News
Fullscreen

Michigan State's Demetrious Cox (7) picks up a Penn State fumble and runs it back for a touchdown in the second quarter. Dale G Young, Detroit News
Fullscreen

Michigan State's Demetrious Cox (7) picks up a Penn State fumble and runs it back for a touchdown in the second quarter. Dale G Young, Detroit News
Fullscreen

Michigan State Demetrious Cox (7) picks up a Penn State fumble and runs it back for a touchdown in the second quarter. Dale G Young, Detroit News
Fullscreen 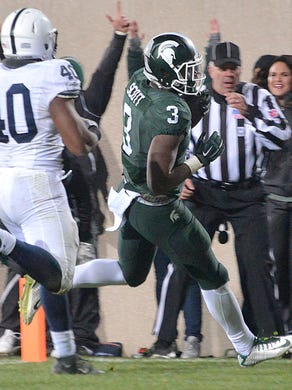 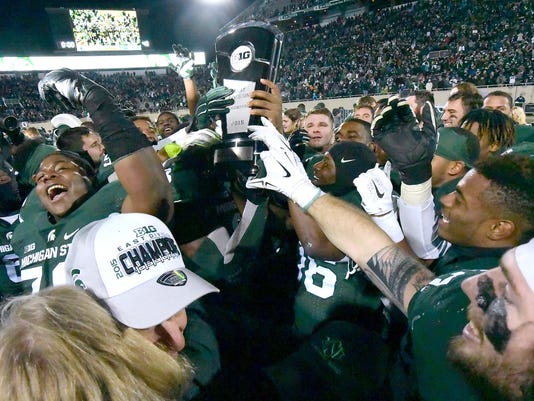 East Lansing — This was the position Michigan State expected to be in all season and dating back to last winter during off-season training, through spring practice and then preseason camp in August.

Big Ten East Division champions — goal No. 1 checked off the list of a season full of expectations.

It came Saturday courtesy of a 55-16 thrashing of Penn State in front of 74,705 at Spartan Stadium, a victory that sends No. 6 Michigan State into next week's Big Ten Championship game against unbeaten Iowa (12-0).

That's where goal No. 2 awaits — a conference title. A win there, and goal No. 3 could be next — a spot in the College Football Playoffs.

"So happy to be going back to Indy," said Michigan State coach Mark Dantonio, who takes his team to the title game for the third time in five years. "Step one is accomplished and I think we reached a little higher this year. We're 11-1 right now and in position to play for a Big Ten championship, and that is step No. 2."

As for that next step, Dantonio feels fairly certain next week's winner will have that chance.

That task waits for a week as Michigan State (11-1, 7-1 Big Ten) celebrated in style on Saturday. By the time center Jack Allen was running into the end zone for a touchdown in the fourth quarter on Saturday, Michigan State's game against Penn State had long been decided.

Along the way, there was plenty of fun, a bit of a Senior Day celebration.

In addition to Allen's 9-yard touchdown run — "Have to use all of our weapons," Dantonio joked — Michigan State also got a 13-yard interception return for a score from defensive tackle Malik McDowell and a 77-yard fumble return for a touchdown from safety Demetrious Cox.

Add to those plays the return of quarterback Connor Cook — 19-for-26 for 248 yards and three touchdowns — from a shoulder injury and four total turnovers created by the defense, and there was little that didn't go the Spartans' way.

"That felt like a win today," said tight end Josiah Price, whose 6-yard touchdown catch in the third quarter put Michigan State ahead, 34-10. "Some of our wins this year have been pretty frustrating. We'd go in locker room saying, 'Dang, we should have played better, should have finished better, should have done this.' I feel like this is how we wanted to execute.

"There's a lot of things to get better and clean up by next week, but it was a good enough win and it felt good."

It was good enough in the first half as Penn State had its share of success offensively, but two turnovers were big. The first was an interception by Arjen Colquhoun in the end zone on the opening drive of the game.

Cook came in and showed he hadn't missed a beat, hitting R.J. Shelton with a 29-yard touchdown pass on Michigan State's first drive. That lead was extended to 13-3 after a 6-yard touchdown run from Gerald Holmes followed by the fumble return by Cox.

Penn State (7-5, 4-4) answered with an 8-yard touchdown pass from Christian Hackenberg to Chris Godwin to cut the margin to 20-10 at the break, but the Nittany Lions would never really threatened again.

Michigan State scored on the opening drive of the second half on a 29-yard pass from Cook to Aaron Burbridge, which was followed by a seven-minute drive that ended with Price's touchdown.

Godwin caught his second touchdown pass early in the fourth quarter to cut the Michigan State lead to 34-16 before the Spartans pulled away.

First it was a 6-yard touchdown run from LJ Scott that was followed by McDowell's interception on a tip from Shilique Calhoun.

"We've been trying to put the defensive tackles in position to score and run it in," Calhoun joked. "I could have caught it but I said it would be more priceless to give it to Malik."

The fun continued on the ensuing kickoff that was fumbled and recovered by Jermaine Edmondson. That led to Allen's touchdown run.

"I knew his offensive line was going to block for him, that was a given," Dantonio said.

Holmes finished with 64 yards on 12 carries while Burbridge had six catches for 75 yards.

"They're the No. 5 team in the country for a reason," Penn State coach James Franklin said. "They played very well today so I need to give them credit."

The Spartans will celebrate the first goal accomplished, there's little doubt of that. But by Sunday night, it will be on to the next item on the list.

"Right now we are actually playing our best football," Shelton said. "You have to play your best ball in November and leading into December and then on after that. We are just playing with a chip on our shoulder like we always do and playing Spartan football."