McShay: 'Concerns' could keep MSU's Cook out of first round

ESPN NFL draft analyst Todd McShay released his first mock draft this week and it didn't include Michigan State quarterback Connor Cook in the first round.

McShay: 'Concerns' could keep MSU's Cook out of first round 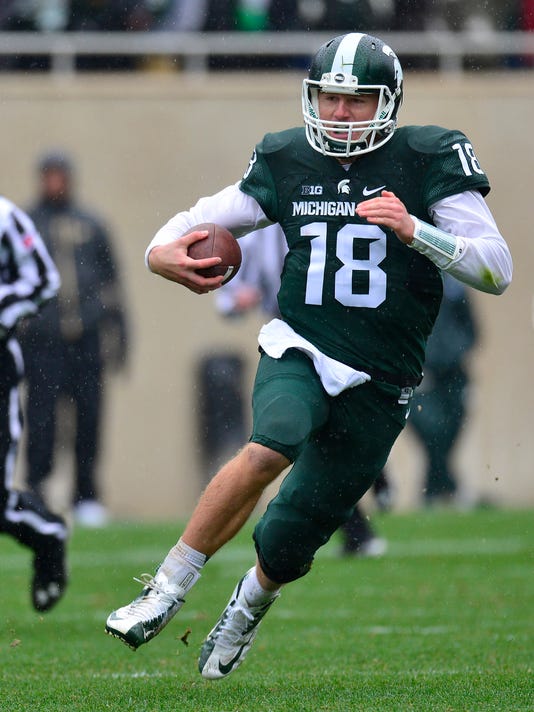 When ESPN NFL draft analyst Todd McShay released his first mock draft this week and it didn't include Michigan State quarterback Connor Cook in the first round, it raised some eyebrows.

Cook, a fifth-year senior, is the winningest quarterback in Michigan State history and has the Spartans preparing to play Alabama in the Cotton Bowl as part of the College Football Playoff. His 34 victories are one behind Stanford's Kevin Hogan for most by an active quarterback and last week he was honored with the Johnny Unitas Golden Arm Award.

But McShay has pointed out some issues off the field as the reason Cook is grading as a second-round pick at this point. He told one radio show that he has been told Cook carries himself like Chicago Bears quarterback Jay Cutler, "where it just kind of turns people off."

On Thursday, McShay elaborated during and ESPN conference call.

"I hope, first of all, that people heard everything I've said about Connor Cook because about 95 percent of it is really positive," McShay said. "Now the 5 percent recently when I was on the radio show -- it was a very specific question asked and it came after an incident at the awards ceremony and there have been questions this year about, 'Why isn't he a captain?'

"All of this stuff has been printed in other places, too. If you talk to NFL scouts and guys who are spending their entire year investigating and doing background checks and talking to people in town and those sort of things, on campus within the program and outside of the program, there are some people -- there are multiple people -- that have some concerns about how he carries himself and what kind of teammate he is and those sorts of things."

Trieu: Hill would be perfect complement to Scott at MSU

The awards ceremony issue occurred when Cook appeared to brush off Ohio State legend Archie Griffin when presented the MVP trophy after the Big Ten Championship game. Cook later apologized and had a long conversation with Griffith.

But McShay said the questions among folks in the NFL began before the season began, specifically why he was not named one of Michigan State's three captains.

"I've got to just be honest about the information I'm getting and we have several months between now and basically May 1 to get all the answers and compile the information," McShay said. "I don't know specifically what's gonna come out and why there are these things out there. But the one thing we have is this guy -- with all the statistics, all the great things he's done playing that position -- was not named a captain. So it kind of started there and there's been a lot of talk from NFL scouts about some of those concerns."

McShay currently has three quarterbacks going in the first round – Paxton Lynch of Memphis at No. 2, Jared Goff of California at No. 5 and Carson Wentz of North Dakota State at No. 30.

However, McShay believes Cook is the best quarterback right now.

"On the field, I think he's the most NFL-ready of the quarterbacks in this class," McShay said. "I think, if developed properly and they all reach their potential, I think that Paxton Lynch and Jared Goff can become better players. But I think right now, Connor Cook, from his ability to read coverage to the game experience he has to knowing how to get out of bad plays and get into good plays, throwing with anticipation, trusting his receivers that they're gonna be there and being able to throw to spots -- he does everything you look for. I don't think he has an elite arm but he certainly has good enough arm strength and I think he's a little bit of an underrated athlete too.

"I think he would be right there on the fringe (of first round) and I think he would probably be a first-round pick if everything is clean. One team is all it takes. One team says, 'No, we don't have an issue with him. We kinda like that.' And there are plenty of teams out there that wish their quarterback had a little bit more of that side to him, if you will. It won't surprise me at all if he ends up in the first round, but there is a lot of digging that will go on between now and the draft."