Team had 12 players who scored in Saturday's win and coach Tom Izzo's biggest issue is making it all blend. 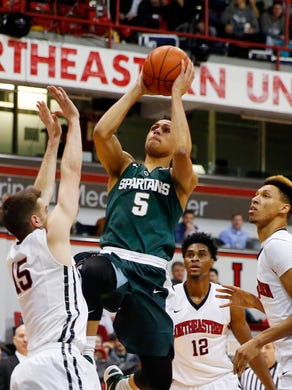 Tom Izzo of the Michigan State Spartans reacts during a game with the Northeastern Huskies in the first half. Jim Rogash, Getty Images
Fullscreen

Denzel Valentine (45) of the Michigan State Spartans stops Caleb Donnelly (15) of the Northeastern Huskies in the first half. Jim Rogash, Getty Images
Fullscreen

Denzel Valentine (45) of the Michigan State Spartans is defended by Jeremy Miller (11) and T.J. Williams (10) of the Northeastern Huskies in the first half. Jim Rogash, Getty Images
Fullscreen

Denzel Valentine (45) of the Michigan State Spartans waits for the ball during a game with the Northeastern Huskies in the first half. Jim Rogash, Getty Images
Fullscreen

Bryn Forbes (5) of the Michigan State Spartans beats Devon Begley (20) of the Northeastern Huskies to the ball in the first half. Jim Rogash, Getty Images
Fullscreen

Denzel Valentine (45) of the Michigan State Spartans shoots over Caleb Donnelly (15) of the Northeastern Huskies in the first half. Valentine finished with 17 points as MSU defeated Northeastern, 78-58, Saturday to go 12-0, matching the school's best start since 2000-01. Jim Rogash, Getty Images
Fullscreen

Javon Bess (2) of the Michigan State Spartans drives by Zach Stahl (33) of the Northeastern Huskies in the first half. Jim Rogash, Getty Images
Fullscreen

Michigan State's Denzel Valentine (45) gets Northeastern's David Walker in the air on a fake during the first half. Winslow Townson, Associated Press
Fullscreen

Quincy Ford (12) of the Northeastern Huskies is defended by Eron Harris (14) and Javon Bess (2) of the Michigan State Spartans in the first half. Jim Rogash, Getty Images
Fullscreen

Boston – Tom Izzo admits it’s not ideal, but at this point in the season, shortening the rotation might not be in the cards.

Twelve players scored in No. 1 Michigan State’s 78-58 victory over Northeastern on Saturday, and junior Gavin Schilling made his first appearance of the season after missing the first 11 games with a turf toe injury.

“I keep saying it, it’s part of the problem,” Izzo said. “But I’ve got to deal with the cards, and right now instead of making it a bad problem, I’m going to make it a decent problem, but understand that it’s not as fluid at times because different guys are playing with different guys.”

The backcourt minutes have been pretty consistent, but finding the right combination with the big men has been changing throughout the season.

On Saturday, Schilling gave a boost when Michigan State was getting hurt on the glass and redshirt freshman Kenny Goins had six points and five rebounds in 15 minutes. Sophomore Marvin Clark and freshman Deyonta Davis saw fewer minutes, but that can change based on the matchup.

“That’s not as easy to handle as a player,” Izzo said. “And so I’m going to try to make those practices for guys earning their keep more in there, and I think it’ll make it more competitive. It’s not like we have players that are going to be stars everywhere. So, maybe they deserve to play, but it’s not like if they were someone else they would be playing any differently, and that’s what I hope to get across to them.”

Depth has its benefits, to be sure. Against Northeastern, it wore down the Huskies who were very active early but ran out of gas late.

Instead of worrying about playing time, however, the Spartans are looking at the depth as not only a positive in games, but as motivation to stay on the floor.

“That’s one thing (assistant) coach (Dwayne) Stephens said in the locker room just now,” senior Denzel Valentine said, “that we have a special team this year, we can go 12, 13 deep, and everybody is gonna be ready to play when they come in. We’ve got a lot of good players on our team, and that’s what makes us so special think.”

Something Michigan State hasn’t done often this season is play two big men at the same time. With Schilling back, that is now an option, especially against teams like Purdue and Maryland that have similar depth up front.

“That is a good problem with depth there, because we might even go to the point where we start two bigs, or play two bigs more often,” Izzo said. “Just depends who we’re playing and what we’re playing. But we’ve got to still get a little more consistent from a bench standpoint, coach standpoint, and hopefully a player standpoint.”

As for Schilling, he was happy with his first action of the season, though he was frustrated to pick up four fouls in just 11 minutes. He finished with four points and three rebounds but was Michigan State’s most effective defender on ball screens.

“I felt pretty good,” Schilling said. “I felt pretty comfortable coming back and I just tried to play my hardest. I wanted to come out and play with energy and that’s what I did.”

Schilling isn’t the offensive option that Costello and Davis are, but his athleticism in the post has been missed.

“He provides toughness, offensive rebounding, defensive rebounding,” Valentine said. “He’s a huge energy guy for us and I think he came in with a tremendous amount of energy and gave us a little spark off the bench. It’s gonna take him a little while to get used to playing again, but for his first game back I thought he was pretty huge.”

Michigan State was outrebounded for the first time this season, 35-33. The Spartans entered the game third in the nation in rebounding margin at plus-16.9.

“They were a lot more aggressive than us starting out,” Costello said. “They sent five to the boards and we didn’t hit bodies and go after the ball. We were content to let the ball drop to us and that wasn’t working at all. We had to get more aggressive on the board and I think they ran out of gas, which helped us.”

The game was the centerpiece of the “Winter Showcase” at Northeastern. The Michigan State women won, 77-51, on Friday and were in the stands to watch the men play. The men’s hockey teams were set to square off at 7 p.m. on Saturday.

After the game, the men’s and women’s teams took a photo at the finish line of the Boston Marathon then toured Fenway Park. From there it was back to Matthews Arena for the hockey game.

“It’s pretty cool,” Bryn Forbes said. “I’ve never been a part of anything like that. I don’t think I’ve ever even been to a hockey game, so it will be cool to see that and experience that. It’s just a cool experience to be able to see the women’s team play and then see the hockey team.”