Connor Cook has drawn his share of criticism of late, but it's not an opinion shared by those in the Michigan State locker room. 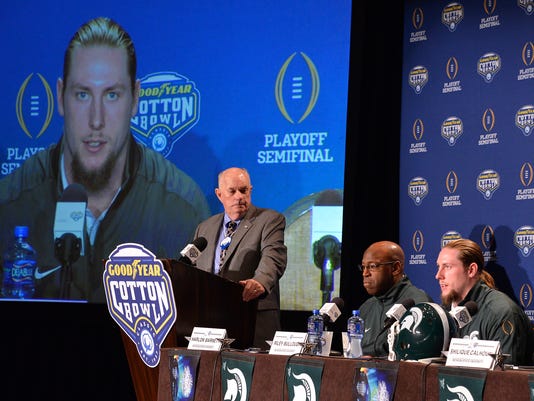 Dallas – Connor Cook has drawn his share of criticism of late, but it's not an opinion shared by those in the Michigan State locker room.

A little more than a week ago, ESPN draft analyst Todd McShay said there were some concerns about Cook from NFL people, something that stemmed from the fact Cook was not voted a Michigan State captain this season and led to him comparing the Spartans' fifth-year senior's attitude to that of Chicago Bears quarterback Jay Cutler, "where it just kind of turns people off."

As Michigan State's defensive players met with the media on Sunday in preparation for the matchup with Alabama in the Cotton Bowl, the notion Cook has a problem in the locker room was shot down.

"It would be tough to be Connor right now cause all he's done is win, but he's getting criticized all the time," junior linebacker Riley Bullough said. "What people don't see is we don't have anything against Connor. He's the greatest quarterback in my mind in Michigan State history. He's a great leader. The biggest thing Connor does is he wins, he knows how to win. He knows how to play in big games and what else could you really ask for in a quarterback? So that's really where I stood on that. Rest proves to be perfect ingredient for Cook

"It would be tough to be Connor right now because all he does is win and gets criticized."

Cook has certainly done his share of winning, compiling a 34-4 mark as a starter, the best in Michigan State history while leading the Spartans to bowl wins over Stanford and Baylor, as well as two wins in the Big Ten championship game.

Bullough said he and his teammates knew after the Rose Bowl win over Stanford that they had a special player leading the offense.

"We were winning all those big games and he was having all those great games," Bullough said. "Once the Rose Bowl happened, after that we realized what kind of quarterback we really had. So the respect keeps growing and since then it has kind of snowballed and here he is now."