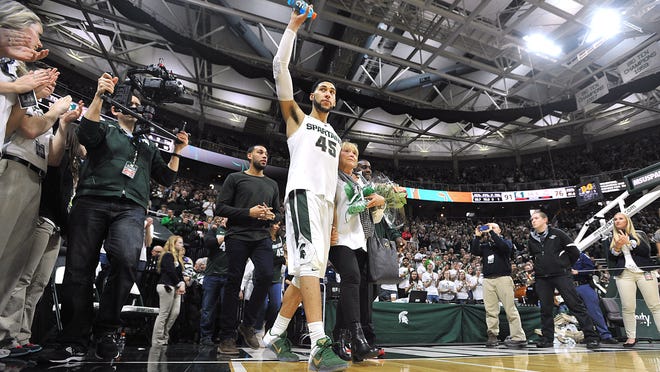 East Lansing – Denzel Valentine caught himself during pregame warm-ups on Saturday, a few tears starting work their way toward his eyes.

The Michigan State senior was about to play his final game at the Breslin Center, and the emotion he wasn’t sure would come Saturday was hitting him square in the face.

“I caught myself tearing up a bit,” Valentine said. “But then I was like, ‘Dude, you got a lot of basketball left and you have to have a good game to enjoy this.’”

He accomplished that, all right, scoring 27 points and handing out 13 assists in No. 2 Michigan State’s 91-76 victory over Ohio State. The win was the 10th in the last 11 for the Spartans (26-5, 13-5 Big Ten), who finished by matching the most regular-season wins in program history.

When his night was finished, he joined the parade to the Spartan logo at midcourt, leaning down and kissing the floor in a tradition that has become as timeless as any at Michigan State.

“A lot of emotions,” Valentine said. “I figured it would be a special day. Me and my teammates really wanted to get a win and have a comfortable win so we could enjoy it. It was a special moment.”

The candidate for national player of the year recorded his 16th double-double of his career and got plenty of help from his fellow seniors.

Matt Costello came out of the game first. His 15 points and 11 rebounds helped him finish Big Ten play averaging a double-double.

“The emotion was pretty much what I expected,” said Costello, who was in tears before the game when his brother, John, sang the national anthem. “Once the game got rolling you forget about it and I wasn’t worried about it being Senior Day and you’re just trying to win a game. It was a fun day.”

Next came Bryn Forbes, who scored 14 points and took the floor with his son, Carter, during the postgame ceremonies.

“I’ve changed a lot, in all aspects of my life,” Forbes said. “From fatherhood, to being a student, an athlete, as a person. It’s been a really growing experience, but it’s been a great experience.”

Colby Wollenman was next, the walk-on who got his first career start, taking the place of freshman Deyonta Davis, who urged Izzo to let the Wollenman take his spot.

“It will be a lasting memory to me,” Izzo said of Wollenman starting. “And more importantly than me, it was a special day for Colby and his parents who very seldom get to see him play.”

And then it was Valentine. The Lansing kid who will almost certainly win Big Ten Player of the Year honors nailed a pair of free throws then raised his hands to the rafters. The crowd roared with approval as he kissed the logo.

Izzo shied away from worrying too much about looking ahead, instead choosing to focus on what Michigan State has accomplished.

“Right now, we’re just going to enjoy the moment; I’ve never been prouder of a group,” Izzo said. “And the group is players, managers, assistant coaches, all the auxiliary staff. My AD, my president. Everybody was here today to do something. A special day. It’ll go down as one I’ll remember as long as I’m alive.”

Michigan State was special on the court, as well, shooting better than 70 percent for most of the game, finishing 34-for-51 for 66.7 percent.

Marc Loving scored 21 to lead Ohio State (19-12, 11-7), which was looking for a signature win to help its NCAA Tournament case. JaQuan Lyle added 18 points for the Buckeyes while Kam Williams chipped in 15 points.

“Obviously they were high-powered offensively,” Ohio State coach Thad Matta said. “We were fixated around one thing defensively too much, and we needed to see two things going on and rotation-wise we weren’t where we needed to be and have the pressure on the basketball that we needed to disrupt. I thought we did a little better job in the second half, but they were just sort of picking what they wanted and putting it on us.”

Michigan State took a 10-point lead into halftime and expanded that margin to 20 in the second half.

Now it’s on to Indianapolis and the Big Ten tournament, where Michigan State will be the No. 2 seed. The Spartans feel like they let a title slip away with a three-game losing streak early in the season, but now they think the opportunity is there to make up for that.

“It’s very special,” Valentine said. “To leave on a good note like today, tying the school record for most wins in the regular season and a chance to win two championships is incredible for me and I’m just happy for the future.”