MSU learns a bit about itself in huge win

Before Michigan State took the field Saturday night at Notre Dame Stadium, so many questions still surrounded the team.

MSU learns a bit about itself in huge win

Michigan State receiver RJ Shelton flies through the air and pulls down a pass for a first down in the second quarter. Dale G. Young, The Detroit News
Fullscreen

LJ Scott leaves a Notre Dame tackler on his face on his way to a first quarter first down. Dale G. Young, The Detroit News
Fullscreen

Michigan State quarterback Tyler O'Connor (7) scampers toward the sideline in the first half. Dale G. Young, The Detroit News
Fullscreen

Michigan State's Monty Madaris leaves Notre Dame's Jay Hayes behind on his way to a long first down in the 36-28 victory. Dale G. Young, The Detroit News
Fullscreen 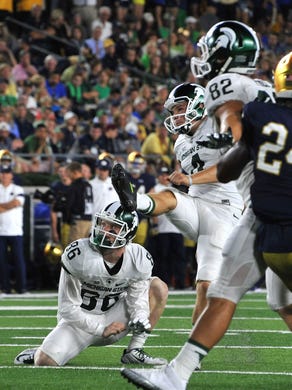 LJ Scott runs though the Notre Dame defense on his way to a third-quarter touchdown. Dale G. Young, The Detroit News
Fullscreen

Michigan State back Gerald Holmes breaks out, and sprints downfield with the entire Irish team chasing him into the end zone. Dale G. Young, The Detroit News
Fullscreen

Gerald Holmes looks over his shoulder to see no defenders near him as he sprints into the end zone for his second touchdown of the day. Dale G. Young, The Detroit News
Fullscreen 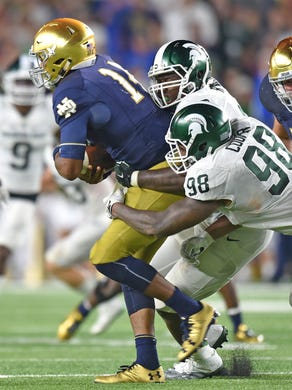 Michigan State quarterback Tyler O'Connor grins and waves at fans on his way back to the locker room. Dale G. Young, The Detroit News
Fullscreen

Spartans Delton Williams (22) and Josiah Price (82) leap into the air as the Spartans take the field. Dale G. Young, The Detroit News
Fullscreen

Spartan back Gerald Holmes breaks out, and sprints downfield with the entire Irish team chasing him into the end zone.(Photo: Dale G. Young / Detroit News)

Before Michigan State took the field Saturday night at Notre Dame Stadium, so many questions still surrounded a team that — once again — was out to prove its detractors wrong.

After getting past Furman in the season-opener with little fanfare, the Spartans had a bye in Week 2, and with a trip to play the Fighting Irish, some wondered what type of team Michigan State really was.

Could Tyler O’Connor effectively move the offense behind a reworked line that looked far from dominant in the opener? Could a young receiving corps find enough playmakers? Could the defensive line replace three starters now in the NFL without missing a beat? Was the linebacking corps really among the best in the nation?

And more importantly, could Michigan State truly be a factor in the difficult Big Ten East Division and repeat as conference champions?

Most of those questions were answered in the 36-28 victory, one that helped move Michigan State up to No. 8 in the nation and one that was downright dominant at times.

“You know, you don’t really form an identity on a football team until mid-year and then you finish it out,” Michigan State coach Mark Dantonio said in his weekly teleconference on Sunday night. “That’s my opinion. You finish it out at the end of the year and at the end of November and figure out who you were. We’ve always said that here and so we’re not jumping to any conclusions, I just think we played very well and respect how our guys played. We competed.”

That they did, and in the process, the Spartans (2-0) not only convinced many around college football that they are a team to be reckoned with, but they also proved a little something to themselves.

“The biggest thing from this game is it gives guys confidence, coming in here and playing as well as we did,” senior linebacker Riley Bullough said. “We could’ve put the throttle down a little bit more. But it’s a win, and it’s a tough place to win.

Before Michigan State finished up by holding off a Notre Dame rally, plenty of those questions were being answered in the process of scoring 36 straight points.

O’Connor, save for one poor throw that was tipped and intercepted, was efficient and moved the offense well, throwing for 241 yards and two touchdowns while the offensive line paved the way for 260 rushing yards and didn’t allow a sack.

Senior receiver R.J. Shelton was his steady self, but freshman Donnie Corley emerged with his first career touchdown catch to highlight a four-catch night for 88 yards.

On the defensive side, the return of linebacker Jon Reschke, who missed the opener with an injury, proved to be a big difference. He led the team with eight tackles while forcing a fumble and intercepting a pass.

That confidence can only help moving forward as Michigan State opens Big Ten play on Saturday when No. 11 Wisconsin comes to Spartan Stadium for a noon kickoff.

The Spartans understand they’re far from a finished product. Dantonio talked about not backing off the throttle as they did a bit in the fourth quarter against Notre Dame and there still are some issues with the pass rush as Notre Dame’s DeShone Kizer threw for 344 yards.

“I think that’s a game-to-game thing. We need to continue to figure out how we’re going to pressure the quarterback. Do we have a go-to guy? I thought (Malik) McDowell played very well. I thought Demetrius Cooper played well, but we’re still developing younger players or players that haven’t played as much, I think, in the defensive line. We played a lot of guys.”

Dantonio said he’s been close to playing freshman defensive ends Josh King and Auston Robertson, who both traveled to Notre Dame. But until they show the consistency and reliability needed, the Spartans will continue to use who they have. That includes guard Brandon Clemons at defensive tackle and tight end Jamal Lyles at end.

“They gave us some snaps and I thought they played pretty well,” Dantonio said. “I think we’re going to need to continue to do that until our young players get ready.”

Regardless of who’s playing, it seems the win over Notre Dame has set Michigan State on the right path. The season is only two games old, but the Spartans feel good about the direction.

“I think we came ready to play but we talked all week and the last two weeks about doing that,” Dantonio said. “So we needed to do that on a consistent basis. That’s leadership that comes from within on our football team and I think that’s the kind of culture we have here. We’ll look to go farther, but I think every step that we take is another step toward this process.”