It’s been a challenge all season for Tom Izzo: How does he divide minutes at the point guard position? 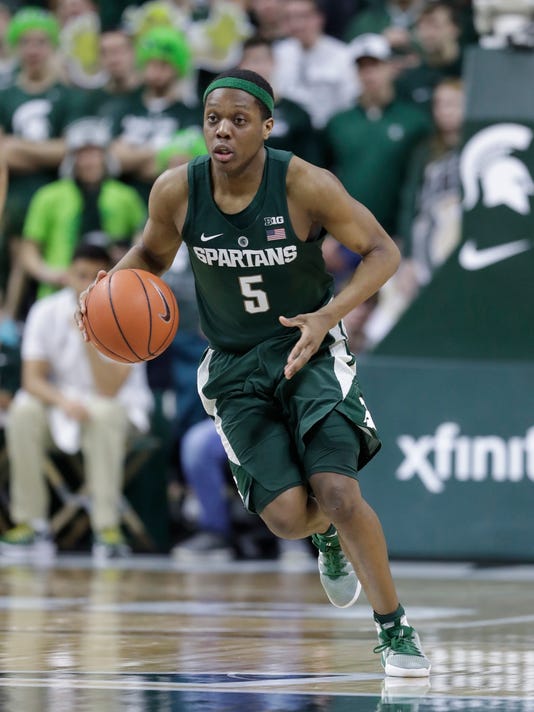 Tulsa, Okla. – It’s been a challenge all season for Tom Izzo: How does he divide minutes at the point guard position?

Between junior Tum Tum Nairn and freshman Cassius Winston, there are clear advantages with each. And on the flip side, the disadvantages are just as obvious.

Nairn is a solid on-ball defender who can push the pace with his speed while Winston is an offensive playmaker who can create for himself and his teammates. However, Nairn is severely limited on the offensive end and Winston’s defensive lapses have been an ongoing issue all season.

It’s been one of the most difficult things Izzo and his staff have dealt with all season, but it seemed clear for much of the season that the future for the Spartans at the point is with Winston. Even though Nairn is the emotional leader of the team, he would be better in a support role – for however long Michigan State lasts in the NCAA Tournament and into next season.

A comparison from Friday night’s opponent in the first round of the Midwest Region seemed to make that point clear.

“Cassius Winston for us is a very high IQ basketball player, really knows how to play and get a pass and a shot for himself,” Miami coach Jim Larranaga said. “But he's most dangerous at finding a teammate and getting the other guys going.

“Quite honestly, there are not a lot of players in the country that play at that high level of basketball IQ. So we had a hard time finding a good comparison at the college level. So we used an old NBA player, now retired, named Steve Nash, and said how important it is when Steve Nash played for you to be ready, because he could find the open man with brilliance. And we find Cassius Winston to be that kind of point guard.”

That’s pretty impressive company, especially for a freshman. But Winston has been one of the better creators in the nation, ranking second in assist rate (46.9), according to Kenpom.com, and ranking second in the Big Ten in assists per game at 5.1.

It’s a comparison that even Izzo sees.

“I think there is some comparisons,” Izzo said. “I've said all along, I said when I recruited him I think he's going to be one of the best passing decision-making intelligent guards that ever played here, and he is going to be.”

The only problem this season have been the times he’s gotten careless with the ball (74 turnovers entering Friday’s game) and, more importantly, the defensive problems.

Michigan State vs. Miami (Fla.): Who has the edge?

In the loss to Minnesota in the Big Ten tournament, Winston played just 12 minutes as he had trouble staying with Gophers guard Nate Mason. That’s led to plenty of work over the past few days on recognizing the problems.

“We have spent a lot of time with Cassius this week because I still think he's a critical component to everything,” Izzo said. “I think this week, not only will it be critical that he plays well at the point, but I could play those two smalls together again a little bit more.”

Whether that’s a possibility heading into next season remains to be seen as the roster is still taking shape. But one thing is clear: The ceiling for Winston is far from being reached while the defense and leadership of Nairn is still valuable.

For it all to work out, it will be Nairn that needs to make the biggest leap. He’ll need to spend the offseason getting stronger and understanding his defensive role. Izzo is sure it will happen with the former Mr. Basketball from U-D Jesuit.

“Everybody wants the process to be sped up so fast,” Izzo said. “As he gets stronger and better and a little more experienced … he's working on some things. He's improved.

“So I hope Jim's right. But I do agree. He can do some things on the offensive end because he sees the court so well. He can make shots. That's the one thing when I recruited him, I didn't know he could make shots like I see. But since I've had him here, he's really a guy that I wish would look for a shot more. Can he be in that Scott Skiles-ish mode, a shooting point guard, some day? I think that could happen, too.”