A decisive run late in the first half and an overwhelming finish proved why the Jayhawks were the top seed. 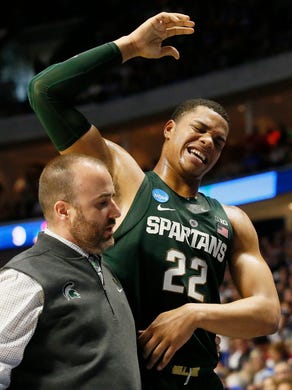 Michigan State forward Miles Bridges (22) grimaces as he is helped off the court following an injury during the first half. Sue Ogrocki, Associated Press
Fullscreen

Michigan State freshman Miles Bridges (22) attempts a 3-pointer over Kansas freshman Josh Jackson, a Detroit native, in the first half of a second-round game in the NCAA Tournament on Sunday in Tulsa, Oklahoma. Tony Gutierrez, Associated Press
Fullscreen

Kansas freshman Josh Jackson, a Detroit native, loses control of the ball on a dunk attempt, failing to make the basket, during the first half. Tony Gutierrez, Associated Press
Fullscreen 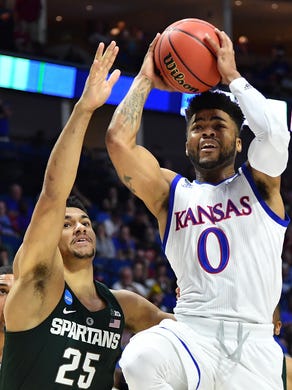 MSU's Miles Bridges is looked at by a trainer after sustaining an injury against the Kansas Jayhawks. J Pat Carter, Getty Images
Fullscreen

Kansas head coach Bill Self and guard Frank Mason III (0) greet each other at the bench in the closing seconds of the second half. Tony Gutierrez, AP
Fullscreen

Kansas' Lagerald Vick follows through on a slam dunk in the second half. Ronald Martinez, Getty Images
Fullscreen 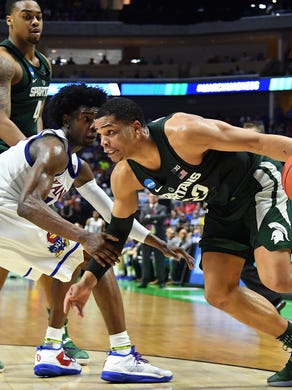 Tulsa, Okla. — Michigan State wanted its shot at Kansas, and for long stretches Sunday in the second round of the Midwest Regional, it was an even match.

However, with Michigan State trailing by one and a little more than 12 minutes to play, Kansas began to remind everyone why it is the top seed and one of the favorites to win the NCAA Tournament.

The Jayhawks responded with a 13-4 run and when the Spartans chipped the deficit back down to five, the Big 12 champions exploded, outscoring Michigan State 21-6 down the stretch to pull away for a 90-70 victory at the BOK Center.

Kansas (30-4) advances to the regional semifinals next week in Kansas City, where it will take on No. 4 Purdue in the Sweet 16.

“Yeah, we gave it all we had,” Michigan State freshman Miles Bridges said. “I don't have any regrets about this team. We played hard. We played to the best of our ability and I love my team for that. We have a special bond together. So I wouldn't trade this year for nothing.”

In what might have been the final game for Bridges, he was the catalyst, overcoming a first-half hip injury to score 22 points and grab eight rebounds. Nick Ward added 13 points while Joshua Langford scored 10 for the Spartans, who were looking to become the fourth Big Ten team to reach the Sweet 16.

“I thought they played an exceptional last eight, 10 minutes,” Michigan State coach Tom Izzo said of Kansas. “They were really good, and I thought that was the difference. You know, with 12 minutes left it's a one-point game. With seven minutes left, it's a five-point game. And then they just took over. I don't know if it was the veterans, a combination of veterans and youth.

"I thought our defense was really good early, other than a couple bad shots that led to layups. I thought we did an incredible job on Mason as far as letting him do what he does, and that's that fast break that's so lethal for him. But the gaps started getting bigger as we got a little tired, and we started missing some shots.

“The only shame of the whole event for me is it wasn't a 20-point game, and yet, the better team won tonight. In saying that, I don't think I've ever been prouder of a group of guys. … I think a lot of guys could have folded, a lot of teams could have folded. They didn't. Proud of them and yet have great respect for the job Kansas did today.”

After an even first half, Michigan State was able keep it tight early in the second and cut the Jayhawks lead to 54-53 after a Matt McQuaid 3-pointer followed by a layup from Alvin Ellis in transition with 12:14 left in the game.

But the Jayhawks got the crucial run, once again, outscoring the Spartans 13-4 over the next four minutes to push their lead to 10. Michigan State got it within five again with 7:15 to play, but Kansas took over one more time and pulled away over the final six-plus minutes of the game, outscoring Michigan State 21-6 to close the game.

“Well, obviously the final margin didn't dictate what a hard game it was,” Kansas coach Bill Self said. “I thought both teams tried real hard. I thought we tried too hard at times. Shot selection wasn't great. But when they cut it to one, that's when we played our best ball. And that was fun to see and certainly it was good to see our guys get in a nice rhythm.”

It was a dramatic end to a game that was close throughout, including the first half when a three-minute surge from Kansas was the difference. With the score tied at 27 following a Ward layup, the Jayhawks went on a 13-2 run that was capped by a lob to Sviatoslav Mykhailiuk that gave Kansas a 40-29 lead with 1:42 left in the half.

However, Michigan State bounced back to score the final six points of the half on a 3-pointer from Langford and three free throws from Bridges to make it 40-35 at halftime.

“We played hard, played our hearts out for three-fourths of that game and we left it all out there,” freshman Cassius Winston said. “We let it get away. The little things — turnovers, bad shots, that type of stuff that hurt you as a team and we let it slip away.

“I don’t think anybody thought going down the stretch it would be 20-point game like that. Every time they made a punch we made a punch back and at the end we let it slip away.”