Miles Bridges eyes national title, has ‘no regrets’ about return

Tom Izzo wondered how Miles Bridges would handle it a few weeks ago, when commercials advertising the NBA draft kept airing during the Finals.

Miles Bridges eyes national title, has ‘no regrets’ about return

Miles Bridges: "I don't regret my decision at all, because I came back to win a national championship."(Photo: Dale G. Young, Detroit News)

Dimondale, Mich. – Tom Izzo wondered how Miles Bridges would handle it a few weeks ago, when commercials advertising the NBA draft kept airing during the Finals series between Golden State and Cleveland.

But Bridges, who’d surprised many with his decision to forego the draft to return for his sophomore season at Michigan State, assured his head coach he was fine.

Even when draft night finally rolled around, and 10 of the first 11 picks were one-and-done college freshman – the other was 18-year-old Frenchman Frank Ntilikina – Bridges insists his curiosity never got the best of him.

Bridges was viewed as a possible lottery pick at the end of last season, but where would he have gone in the draft? Izzo had heard from NBA front-office executives in April that Bridges would’ve gone somewhere between the eighth and 14th selection. So was he a top-10 pick, after all? Or would he have fallen to Charlotte at No. 11, or maybe Detroit with the 12th pick?

Ask him now, though, and he’ll only shrug, as he did Thursday before the opening night of the annual Moneyball Pro-Am summer league at the Aim High sports complex near Lansing.

"I don't regret my decision at all, because I came back to win a national championship," Bridges said. "Those guys, they made the best decision for themselves. …

“I knew what I was doing when I chose to stay another year. So I wasn’t jealous or anything watching the draft. And I was happy for the people that got drafted, because some of them, they’re my close friends.”

But his closest friends, those are the ones he’s more concerned about now, and this is another chance for Bridges and the rest of his Michigan State teammates to show it. 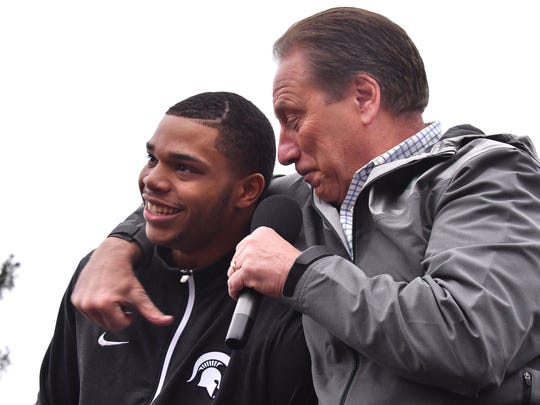 A year ago, Bridges set the stage for his college coming-out party here in Dimondale, wowing the Moneyball crowds with his high-flying game and an assortment of highlight-reel dunks. And the gym was packed with a standing room-only crowd for Thursday’s encore. The league, run by former Lansing Everett standout and coach Desmond Ferguson, hosts twice-weekly games through early August and there is no admission charge, also per NCAA rules.

“I’m just playing the sport I love,” Bridges said, smiling. “And if people want to watch me, then I wouldn’t want to charge them anything.

“We just do this for our fans. Last year, we didn’t have as good a season as we thought we would, and they still came out and supported us. So that just shows you how loyal they are.”

Bridges was paired with MSU point guard Tum Tum Nairn on one squad – NCAA rules allow only two college teammates per summer-league team – and squared off Thursday night against another that included former Oakland star Key Felder, now with the Cleveland Cavaliers.

Felder’s team held on for a 96-92 win despite a 33-point effort from Bridges that featured several dunks, including a one-handed windmill putback that had the crowd roaring early. But that wasn’t really the point.

"I just want to get back to playing form," Bridges said.

And if this summer is any indication, look out. Bridges, a 6-foot-7 swingman who was named Big Ten freshman of the year despite missing a month with a midseason foot injury, says he has shed 18 pounds this spring, down to 225 after finishing last season playing at 235 and then getting up to 243 at one point after taking some much-needed time off from conditioning work.

Now Bridges, who averaged 16.9 points and 8.3 rebounds last season, says he’s feeling fit and trim and “more comfortable out there on the wing,” which is important, he adds, “because I’ve got to play another position.”

With the addition of two highly-touted big men in freshmen Jaren Jackson Jr. and Xavier Tillman – the latter went head-to-head with MSU's Nick Ward on Thursday – Bridges , who was forced to play out of position at the four due to all the Spartans' frontcourt issues, will see more time on the wing as a small forward this season. And along with the NBA feedback he got before deciding to return for another year, that’s part of the reason he’s putting such an emphasis this season on his perimeter skills, working on his ballhandling and a more consistent jump shot.

“I don’t want to say I’ve got more freedom, because Coach Izzo gives me all the freedom in the world,” said Bridges, who shot 39 percent from 3-point range as a freshman. “But I just feel like I’m going back to what I regularly do. I’ve been learning how to guard guards, learning how to read the screens.”

To that end, he spent some time last month in Miami working out three times a day with Haseeb Fasihi, an athletic trainer who specializes in NBA player development. Thursday, he said he’s already seeing some of that work pay off.

“I feel amazing,” he said. “I don’t get tired as quick. I’m able to play defense against Josh (Langford) and Tum and those guys, so I think it was a great move for me.”

And as he flashed some of those moves on the court Thursday, Ward hardly needed a second look. Asked about Bridges, he laughed, “He’s just getting started.”