Danton Cole is a winner and MSU hockey needs a revival

It has been a while since Michigan State won routinely in ice hockey.

Danton Cole is a winner and MSU hockey needs a revival

East Lansing — The chill inside Munn Ice Arena, the 43-year-old home to Michigan State hockey, is a welcome relief from a late-July dose of humidity.

Inside, the new head coach, Danton Cole, prepares for his first season with the Spartans since some glory days 30 years ago, when he skated for the late, great Coach Ron Mason.

It has been a while, since Michigan State won routinely in ice hockey.

But Cole is a winner.

As a player, he helped deliver the Spartans to national prominence in the 1980s. In a school-record 180 games played, he scored 69 goals and assisted on 94 for 163 points.

Playing in the NHL for parts of 11 seasons, Cole won the 1995 Stanley Cup with the Devils, sweeping the Red Wings in the final.

As a coach, he won the 2002 Colonial Cup, the championship of the defunct United Hockey League, with the Muskegon Fury. 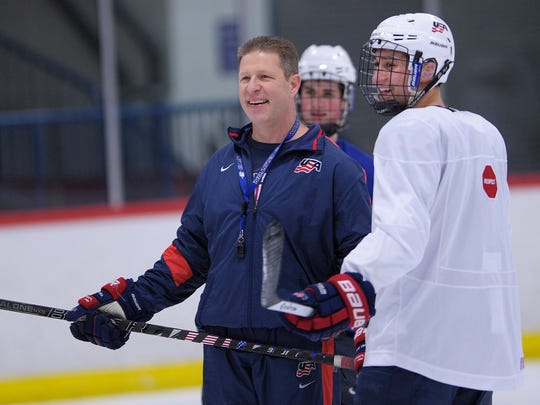 In Ann Arbor and Plymouth, as a coach for USA Hockey in the National Training and Development Program, Cole helped prepare the American players that won the 2010, 2013 and 2017 World Junior Championships, and he coached two Under-18 World Championship teams.

“I guess when I look back at it, it’s been 18 years getting ready to come here and try to get some things done.”

In the early going, Cole said he has a 12-month plan, with four big points.

First, he wants to begin to return the program to the elite status established by Mason, to help attract players who want to develop hockey careers and graduate from Michigan State.

Second, Cole, a former three-time Academic All-American, said he wants to identify and recruit those players

“We’re getting into some battles, and maybe some like we haven’t been in for a while,” Cole said, amid the constant competition for quality players. “We don’t have to win all of those. We just need to win some of them.”

He hopes to announce some commitments at the alumni golf outing, in August.

The third objective, he said, is getting around campus and the town to help bring big crowds back to Munn.

“We’ve been doing a lot of work to get Munn back to a place where it’s sold out, every night, to where it’s a very difficult place for teams to play in,” he said.

The fourth point is even more critical, and it calls on Cole to be an even bigger ambassador for Michigan State hockey.

“The last one, that I think ties-in everything together around here, is getting the new addition, the new front porch on the Munn building,” he said. “A new locker room, new offices, just an elite training and teaching facility that will attract those players.

“I think they go hand-in-hand.”

Michigan State delayed the long-planned $18 million to $20 million development this spring, until fundraising is more successful.

“Munn, I think the main part of it is world-class,” Cole said. “We just want to get all of it there, and then, I think, it’s no stopping us.”

When Mason coached, the Spartans were tough to stop. In his last five seasons, they were 149-37-25 overall.

If Cole eventually restores the splendor, they will talk about him for generations in East Lansing.

Asked to coach during his final season as a professional player in Grand Rapids, Cole said he liked it.

His mentors include Jeff Jackson, the acclaimed coach of Notre Dame, for whom Cole played in midget and junior hockey.

“He was a real thorough coach then, and he is now,” Cole said.

“He taught us a lot about hockey and life; just how prepared he was, and how he was able to establish a culture and to have that (persist),” Cole said. “There’s still a lot of Coach Mason around here.”

In the NHL, Cole said he learned from Terry Crisp and Jacques Lemaire, who both won Stanley Cups as a head coach and a player.

Lemaire, GM Lou Lamoriello and the nine-time Stanley Cup-winning player, scout and coach Larry Robinson were all with the Devils when Cole was there.

“The one year I was there with Jacques and Larry Robinson was tremendously impactful on how I approach the game as a coach and how we approach things as management,” Cole said.

“I think Mason would have fit in well with those guys. You know, he would have seen the way the run things, and they would have played off each other, really well.”

Cole also gave great credit to another mentor, Tim Taylor, the late, former coach at Yale and of two United States Olympic teams, with whom he worked at the National Team Development Program.

“I’ve been really, really blessed to be around a lot of great coaches and great men, in my life,” Cole said.

Meanwhile, Cole’s father taught at State and his mom and dad were both students there, as was his sister. His wife Debbie is from Lansing, and they are building a new home in the area, after moving from Saline.