If preseason camp seemed a bit longer this season, that’s because it was.

Fans get a look at the 2017 Michigan State football team at Spartan Stadium.

East Lansing – If preseason camp seemed a bit longer this season, that’s because it was.

Normally a four-week process, college football teams this season were forced to push that process out further as Michigan State went to five weeks. It was all to try to fit in the limit of 29 preseason practices without having two practices in a day, something the NCAA banned last spring.

While Michigan State hadn’t regularly had two-a-days in quite some time, the new format allowed the Spartans to add in a day off each week, something that proved to be a big hit.

“I would say it was a little bit more fun,” senior offensive lineman Brian Allen said of camp, which broke on Thursday. “Having the Sunday off, we've all talked about it. If we had to go five weeks, we'd rather go five weeks with a Sunday off. It's not as long or drawn out. You have something to look forward to on Sundays. You have a break and then Monday is like a fresh start. I think the general consensus of the team was that everyone liked the Sundays off and the extra week.”

Coach Mark Dantonio said throughout camp how much the day off helped, as well as getting more time for meetings and walk-throughs.

“You know I like the day off,” Dantonio said. “I think that the day off gave our players a sense of freshness that next week. When you go every single day, I think that gets very monotonous. It's a little bit long, but I think that there's a lot of learning done and I think that we really played the hand that was dealt and I am happy with the camp.

“We still won't use all of our practices. We'll use almost all of them, but I think we'll have 27 or 28. But I think it was a good camp and the one day really helped us.”

Sept. 2 vs. Bowling Green: The Falcons finished the season strong in 2016, winning their final three games. However, riding that momentum over an entire offseason can be difficult, and the fact remains BGSU is early into a rebuild and is likely a couple of years from contending in the MAC. Michigan State will take advantage as it will be eager to get off on the right foot after a long offseason. Winner: Michigan State Andrew Weber, Getty Images
Fullscreen

Sept. 9 vs. Western Michigan: P.J. Fleck is gone and so are some of the Broncos’ best players, including WR Corey Davis, a first-round pick in the NFL Draft. That doesn’t mean the cupboard is bare (running back Jarvion Franklin returns), however, and the Broncos might have their best chance to beat MSU. But the Spartans likely will still be too much for their MAC neighbors and hold off WMU in a close one. Winner: Michigan State David Dermer, Associated Press
Fullscreen

Sept. 23 vs. Notre Dame: It won’t have near the hype as last year’s battle between ranked teams, but it might be just as hard to predict. The Irish had their share of issues last season, as well, and there’s not much sign their defense will be much better. However, they’ll likely score some points and that can put plenty of pressure on a Spartans defense that might still be trying to identify its difference-makers. Winner: Notre Dame Eric Gay, Associated Press
Fullscreen

Sept. 30 vs. Iowa: Another tough one to figure out, as Iowa lost plenty of playmakers on offense and it will be hard to see just four games into the season if the Hawkeyes can score. However, the defense will be one of the better ones in the Big Ten, and defense usually travels. That makes this a tough conference opener for the Spartans, who likely will be trying to avoid losing two straight. Winner: Iowa Elsa, Getty Images
Fullscreen

Oct. 7 at Michigan: There will be plenty of talk about the last time the rivals played at Michigan Stadium, and there’s chance this game could be as close as the one in 2015. The Wolverines have nearly as many questions as the Spartans after losing more than a dozen starters and plenty to the NFL, but there’s talent, to be sure. Michigan is likely to be a heavy favorite, but this one will be tight with the edge going to the home team. Winner: Michigan David Guralnick, Detroit News
Fullscreen

Oct. 14 at Minnesota: This could shape up to be the game that determines whether Michigan State proves it’s on the right track or headed for more frustration. A three-game skid can be tough to pull out of, but if the Spartans go on the road and beat a Minnesota team that thinks it can contend in the West it could be just what they need to convince everyone, themselves included, that last season’s woes were the exception, not the norm. Winner: Michigan State Paul Battaglia, Associated Press
Fullscreen

Oct. 21 vs. Indiana: Michigan State will be heading into its homecoming game feeling good about getting a conference win, and doing that on the road. Indiana will come to town with a first-year coach and some decent players, but likely not enough to repeat the overtime victory it recorded last season over MSU, one that signaled troubled times ahead for the Spartans. Winner: Michigan State Darron Cummings, Associated Press
Fullscreen

Oct. 28 at Northwestern: Michigan State has won five straight on the road over Northwestern and always draws well in Evanston. The support likely will still be there, but this time the Wildcats have a team that might be the best in the West led by QB Clayton Thorson (18) and RB Justin Jackson (21), who torched MSU for 188 yards and two touchdowns last season. Winner: Northwestern Julie Jacobson, Associated Press
Fullscreen

Nov. 4 vs. Penn State: The Spartans are still smarting from the second-half whipping they took last season in State College. The only problem is the Nittany Lions return plenty of the playmakers from last year’s Big Ten championship team that will be looking to repeat in the West Division and try and find a spot in the playoffs. Not the best matchup for a younger MSU team. Winner: Penn State Jae C. Hong, Associated Press
Fullscreen

Nov. 11 at Ohio State: Michigan State has played Urban Meyer’s team as well as any in the Big Ten, winning two of the last four and coming up a point shy of an upset last season. However, heading to Columbus to take on a team coming off a playoff berth and expecting to match the last-second 2015 win at the Horseshoe will be too much to expect. Winner: Ohio State Al Goldis, Associated Press
Fullscreen 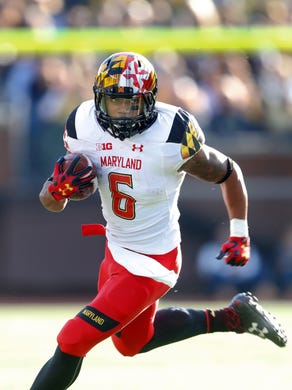 Nov. 18 vs. Maryland: Another of several losses from last season the Spartans will be looking to avenge. The Terrapins got to a bowl last season and will be shooting for the same, but by this point in the season, odds are Michigan State’s offensive line is gelling and the running game is clicking, something the Terps had trouble with a season ago. Winner: Michigan State Paul Sancya, Associated Press
Fullscreen

Nov. 25 at Rutgers: When a team needs a win on the final week to reach a bowl game, the best opponent might be Rutgers. The Scarlet Knights were awful in 2016 and will be hoping to simply show they're headed in a positive direction under second-year coach Chris Ash. With the possibility of missing a bowl game for the second straight year looming, expect the Spartans to get it done. Winner: Michigan State. FINAL MSU RECORD: 6-6 overall (4-5 Big Ten) Noah K. Murray, Associated Press
Fullscreen

Dantonio gave his players two days off before they return to practice Sunday to begin preparation for the Sept. 2 opener against Bowling Green. That time off has always been something the Spartans have done. And while players that live close by were able to head home for a couple days – senior RB Gerald Holmes watched his alma mater Flint Carman-Ainsworth play Grand Blanc on Thursday night – others were taking advantage of the down time.

Allen, however, had a simpler plan.

“I'm excited to just kind of lie in my bed and do nothing,” he said with a laugh.

It wasn’t much different for fellow captain Chris Frey. The senior linebacker was looking forward to spending time with his fiancé, Montana Henry, and taking his dog, Drama, for walks.

“‘Entourage’ is my favorite show,” Frey said, explaining how he named his Great Dane. “So he’s named after one of my favorite characters.”

More: MSU mailbag: QB could be waiting game for deWeaver

s each player takes a couple days to decompress, they’ll be able to take stock of what was accomplished over the past month.

For Allen, it was about locking in as the starting center for the first time.

“I've never really had the center position, it's never been mine,” Allen said. “I never had to focus on center. I've always been thrown in there and I'll get by that week and then I'll be back in my guard spot. It's the first time it's been mine. I think I really grew in it. I've always been more comfortable at guard than center; I always knew the plays better at guard than center. I was playing center for spring ball and now and I feel like I'm at the same mindset that I was at guard, so it's just a confidence thing for now.”

Frey believes the whole team has that confident mindset, the misery of last season now a memory and the focus on proving Michigan State is still a player in the Big Ten.

“We're back. Last year isn't who we are,” Frey said when asked what was the most significant development in camp. “It was a phase that we're past and we're ready to get back to winning games and to be in contention of winning the Big Ten championship.”