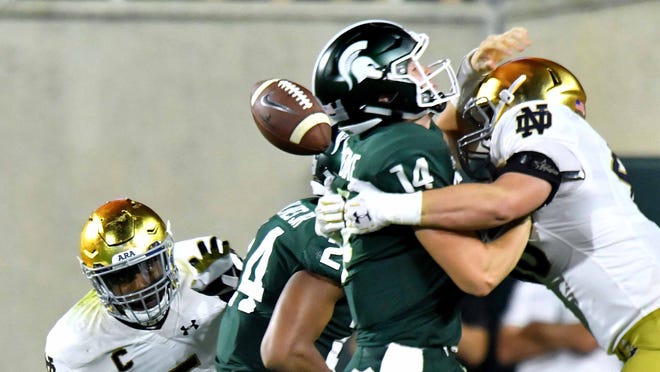 East Lansing — While the turnovers were the story for Michigan State on Saturday night, the penalties came in a close second.

As Notre Dame was busy turning Michigan State’s three turnovers into touchdowns in its 38-18 victory at Spartan Stadium, the Spartans weren’t doing themselves any favors by adding nine penalties for 97 yards.

Some were questionable, to be sure, but not all of them. And for a team that had just seven penalties entering the game, it was a step in the wrong direction. An offsides in the second half was especially upsetting to coach Mark Dantonio as the defense had just made a big third-down stop with the possibility of a comeback still a reality.

“We’ve had seven penalties in two games. We’ve got to play more effectively in that area, so that hurts, but ultimately the turnovers are what crushes you, being minus-three in the first half.”

The turnovers were, indeed, too much to overcome, but the penalties were critical, as well.

The offsides call was just one. One series late in the first half was derailed by a false start call and two straight holding calls. The defense did its share, too, as it was flagged for a roughing-the-passer penalty and a hit out of bounds.

“Obviously, we don’t want to get those types of penalties, that’s way too many,” co-defensive coordinator Harlon Barnett said. “I think coach just mentioned that’s more than what we had in the first two games combined, if I’m not mistaken. Obviously, we need to get that cleaned up. We stress penalties all the time, we talked about it a lot in the last two weeks, but we’ll get those cleaned up.”

But the effort was there, and that, the Spartans believe, was at least a good sign.

“You don’t like to see them, but it comes with playing physical,” senior center Brian Allen said. “We just have to clean them up a little bit. We have to be a little more mature about it moving forward. It’s good to have guys trying to finish. We just have to learn from them.”

There was some good news for Michigan State as the Spartans landed a commitment from four-star quarterback Dwan Mathis of Oak Park. The junior, who was on campus Saturday, announced on Twitter that he was committing to Michigan State.

The 6-foot-5 Mathis weighs 196 pounds and is ranked the No. 6 player in the state, including the No. 6 dual-threat quarterback in the nation, according to 247Sports. Mathis was committed to Iowa State before backing out of that in June. He was also considering Pittsburgh, Cincinnati and Kentucky as well as a handful of others.

Redshirt freshman kicker Matt Coghlin hit a 40-yard field goal in the second half, the first field goal of his career. He entered the game a perfect 9-for-9 on extra points but hadn’t attempted a field goal until Saturday.

… Junior offensive lineman Chase Gianacakos wore No. 94 and played a handful of plays at tight end.