MSU’s Cassius Winston grows as leader on, off court

Cassius Winston has shown something those close to him have always understood — he’s not just a basketball player.

MSU’s Cassius Winston grows as leader on, off court

Matt Charboneau and Bob Wojnowski of The Detroit News talk about Michigan State playing at Little Caesars Arena on Friday, and facing No. 14 seed Bucknell.

It was a cold night back in February when thousands lined up at the Kellogg Center on the campus of Michigan State, attempting to make their way into a town hall meeting to discuss the sexual assault scandal that had enveloped the school and the community.

Former doctor Larry Nassar had just been sentenced to assaulting hundreds of young women, many of them while he worked for MSU, and the university was reeling. The president had resigned and the athletic director stepped down. In the midst of all that, the men’s basketball and football programs had come under scrutiny after a report questioned how each had handled sexual assault cases over the years.

The meeting was a chance for voices to be heard, ideas to be exchanged.

Cassius Winston was there, too.

Yes, the starting point guard for the basketball team was there. Not for attention. Not for any pats on the back. He was there because he, too, is a student and a member of the community.

It just so happens he’s a basketball player, and a pretty good one, too. And while his game has grown to the point where he’s among the leaders in the nation in 3-point shooting and the best assist man in the Big Ten, it’s his growth off the court that has those around him so impressed.

“From when they’re little and they do the things that bring a big smile to your face to the point where he’s developed into a young man,” said Reg Winston, Cassius’ father, “just to see that where he’s come from and where he’s going, I’m just a proud father.

Where Winston is going is hard to predict, except few would doubt the path he takes will lead to anything but success. What he’s doing now is what’s been more remarkable.

The 20-year-old who was Mr. Basketball at U-D Jesuit as a senior in 2016 has taken huge steps on the court. As Michigan State prepares to take on Bucknell on Friday night at Little Caesars Arena in the Midwest Region of the NCAA Tournament, Winston might be the most important piece to the Spartans’ potential championship puzzle.

More: Who has the edge: Michigan State vs. Bucknell

The shooting has been a revelation to coach Tom Izzo, as Winston is hitting better than 52 percent of his threes this season. Over and over this season Izzo has said he didn’t realize what a marksman Winston was.

“He didn’t have to in high school,” Donnelly said. “He could get to the rim whenever he wanted to and he was so dynamic with the basketball in terms of finishing around the basket, and when the defense would collapse he’d find other players for dunks or layups or threes. He didn’t really have to shoot consistently from the perimeter.

“I will say this, he’s become a better shooter because he’s worked at it. In the summer, he put a ton of time in. He’s a gym rat.”

But this season, that gym rat has shown something those close to him have always understood — he’s not just a basketball player. The game is important, sure, but there’s so much more to Winston than bouncing a ball.

As the tension built around the program this year and Izzo was hounded on a regular basis, it was Winston who offered the steady voice from inside the locker room. 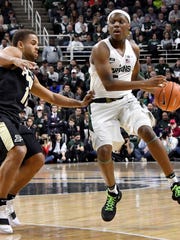 There were no clichés being recited. Winston was genuinely moved the night of Jan. 26 when the entire student section showed up at the Breslin Center wearing teal to support sexual assault victims. And a couple days later, when Izzo was chased down a hallway by an ESPN reporter after a win at Maryland, Winston was, again, the voice for his team, defending his coach but understanding what a highly ranked team could do for the university

“We’re representing the school right now and that’s how we’re putting it,” Winston said. “We got to carry ourselves correctly off the court, and on the court we have to show what Michigan State is about.

Back in Detroit, Reg Winston was bursting with pride. His oldest son was becoming a player and a man right in front of his eyes.

“I always knew he had it in him,” said Reg Winston, who is an assistant to Donnelly at UD-Jesuit. “I guess since we spend so much time on the court, we relate stuff to on the court and apply to real life situations as he’s developing. This young kid, a point guard has to be a leader and there are all different types of leaders but you have to find your voice and it seems like right now he’s finding his voice. Not just on the court but off the court, too.

“Because he didn’t ask, none of the players asked, to be put in this situation. But they are in the situation and to see how he reacts and how he handles himself, that’s basically finding his voice. I couldn’t be more proud of him.” 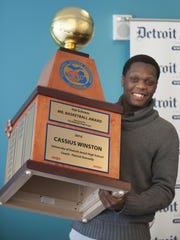 Donnelly heaps praise on Winston’s parents, Reg and Wendi, for how they’ve raised their son.

“The basketball will stop bouncing at some point, and I’m very proud having been around Cassius for as long as I was, very proud to see what kind of young man he has become and know he’s gonna be successful in whatever he tries to do,” Donnelly said. “I love watching him play basketball. I’m a big fan of his and a big fan of Michigan State, but I’m really excited to see Cassius thrive both on the court and off the court, and certainly think that he’s well prepared to do both.”

That ball will stop someday. It’s a phrase both Winston and his dad used, too. They understand basketball is just a part of life, it’s not everything.

That’s why academics is pushed so much in the Winston household. Cassius turned down offers to play at Harvard and Stanford when he selected Michigan State. He says those options were possible because of his time at U-D Jesuit.

“It just changed my whole mentality, my whole outlook on life basically,” Winston said. “Just being in that environment helped me out a lot.”

For now, though, Winston will continue to bounce the ball. He’ll hope he does enough over the next three weeks to deliver the national title to Michigan State he and his teammates have openly coveted.

Win or lose, there’s no doubt Winston will be there after it’s over. He’ll be the Spartans’ voice.

“I’m happy for him and ready for him to go out there and chase his dreams,” Reg Winston said. “It’s something he’s always wanted to do and to be out there, man, I couldn’t be more happy for him.”

Izzo feels the same way about his point guard and has watched the sophomore blossom this season. And Izzo believes, as Winston continues to establish his leadership, he’ll get even better on the court.

“Under some tough circumstances he did an unbelievable job of handling it without any direction from us,” Izzo said. “And I think as he does off the court such a good job, if he continues to do that on the court — be more demanding and be the quarterback of this team — I think his progress is going to rise and I think our team's going to get better.

“He's really had a good week, so I'm kind of excited to see how Cash does in this tournament.”