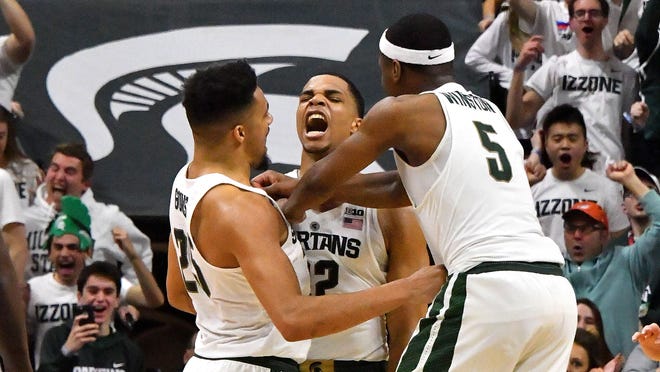 As the clock wound down Sunday afternoon in what turned out to be Michigan State’s final game of the season, the Spartans were desperate to score points.

It was the second round of the NCAA Tournament at Little Caesars Arena, and while 11th-seeded Syracuse was playing a stifling 2-3 zone defense, it was hardly lighting up the scoreboard. The chance was there for Michigan State to win – if it could just simply put the ball in the basket.

Instead, the Spartan missed their final 14 shots over a span of more than five minutes as Syracuse knocked off third-seeded Michigan State, 55-53.

In the wake of yet another disappointing tournament loss there was one question that arose more than others – with points at a premium, why were Ben Carter and Xavier Tillman getting the bulk of the playing time while Jaren Jackson Jr. and Nick Ward spent most of the time on the bench?

The answer seems to be two-fold. The Spartans clearly thought Carter was the better option in the middle of the zone and that Tillman was doing a better job defensively.

“He was in foul trouble the first half, and it's different in the tournament,” Michigan State coach Tom Izzo said of Jackson. “And the second half we just, Ben seemed to have a feel in there, which we knew he did. But it really was in the defensive end.

“(We slowed their guards) because we got some help from our bigs. And Xavier was really good at it. And then we were moving Nick and, in all honesty, we put Ben in there because he had such a feel. I mean, he got some kickouts, we had some wide-open looks. I mean, really good looks, and it just didn't happen.”

The result was a season-high minutes for both Carter (23) and Tillman (22) while Jackson and Ward watched for extended periods. In fact, Ward, who was 4-for-5 shooting and scored 10 points, sat for the final 10:29 of the game. Jackson went a stretch of nearly nine-and-a-half minutes in the second half on the bench.

It was clearly a rotation Syracuse didn’t expect, which turned out to benefit the Orange.

“I think it really helped that Jackson didn't have a good game,” Syracuse coach Jim Boeheim said. “I was most concerned about him in there, because he can make the play and score. And when guys miss a couple of foul-line jump shots, everybody thinks that's where you should go and that's the shot. It's a hard shot. There aren't that many guys that turn and make that shot.”

Michigan State didn’t make those shots or many others as it was just 17-for-66 for a season-low 25.8 percent. The Spartans were also 8-for-37 on 3-pointers, though the zone defense didn’t allow for many post opportunities, which limited Ward’s effectiveness.

“It's probably hard for Nick,” Izzo said. “Nick played pretty well, too, but he's not the kind of guy that kicks (the ball) out. And he's trying to put it up and their length, when you're underneath the basket, bothered us.”

The playing time for Ward has been an ongoing theme all season. One of the more effective low-post scorers in the Big Ten, the 6-foot-8 sophomore was good early in the season.

But as the Spartans entered conference play, the double teams started to come and that bothered him. That, along with continued struggles on the defensive end, led to varying minutes each game.

Ward said he wished he was in the game late on Sunday, but he saw the reasoning.

“Coach wanted more of a defensive team,” Ward said. “That five was working at the time, so that was the best five working for Coach, so he left that five in.

“Of course I wanted to play, but Coach wanted that five in, so we had to go with his decision.”

But neither have the offensive game of Jackson and Ward, which makes the two-point loss tougher for some. However, Izzo believes the right guys were in the game.

“We did some different things defensively than we've been doing that worked,” Izzo said. “And then the middle of the zone, Jaren is going to be really good in there, and right now Ben just had the experience to know what to do. And, man, we got some good looks. I don't know how many assists he had, probably not many because nobody made any shots. Two. But we had good enough shots.”

Michigan State player minutes by half on Sunday against Syracuse:

Jaren Jackson: 7 first half, 8 second half