Jaren Jackson Jr. and Miles Bridges were at the NBA Combine on Thursday as nearly 70 of the top prospects for next month’s draft are in town to make their pitch to the league’s 30 teams.

Former Michigan State star Miles Bridges discusses the NBA teams that are looking at him during the NBA Combine. 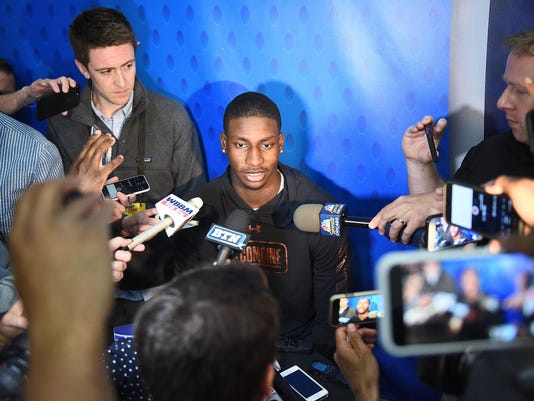 Chicago — Jaren Jackson Jr. and Miles Bridges were at the NBA Combine on Thursday as nearly 70 of the top prospects for next month’s draft are in town to make their pitch to the league’s 30 teams.

Neither Jackson nor Bridges were taking part in the games being played at Quest Multisport, but they’re each still going through multiple interviews with teams while getting bombarded with media from around the country.

As he spoke, Jackson loomed behind the large group of reporters and was soon giving his former teammate a hard time for not responding to his call earlier in the day. It was a loose moment the two shared — like many they did last season at Michigan State — as they prepare for what will be the biggest day of their basketball lives.

Both are expected to go in the top half of the first round — Jackson likely in the top five and Bridges projected more in the 8-12 range.

Where they both go remains to be seen, but what’s interesting is the varying paths each took to get to this point. Bridges could easily have been sitting in the same spot a year ago but opted to return to Michigan State for his sophomore season. Jackson faced the same choice this season, ultimately opting to head to the NBA.

Bridges feels it was the best move for him, and said teams have been praising him for his maturity.

“Me staying was a good thing,” Bridges said.

For Jackson, it was a bit tougher. On Thursday, he gave an idea of just how close he came to following in Bridges footsteps and sticking around for a second season in East Lansing.

“I was back and forth,” Jackson said. “It was one of the toughest decisions I ever made to leave. I loved it so much at Michigan State. My teammates, the fans, the people there. Just the community was very embracing. But my teammates and my coaches gave me the confidence to make a clear-headed decision and I think I made the right one.”

After Michigan State as knocked out of the NCAA Tournament in a second-round loss to Syracuse, the decision from Bridges came quickly. For Jackson, it took more time.

By the weekend of the Final Four, it seemed his staying was just as likely as him leaving. But the morning of the national title game, Jackson made it official that he’d head to the NBA. And, Jackson said, it took all that time to convince him heading to the NBA was the right move.

“It was less back and forth,” Jackson said. “I would say I was more inclined to stay at school. For a lot of the time I was thinking about that. I kind of came to the decision late, later than most.”

What changed his mind?

It was one that certainly seems like the right one considering when the draft rolls around on June 21, Jackson will be one of the first few picks.

He said he’s talked with plenty of teams and is leaning on former Spartans in the NBA and his dad, Jaren Jackson Sr., who played in the NBA for advice. He understands there will be a learning curve but believes he’s ready to handle it all.

And no, he didn’t leave because he was upset with coach Tom Izzo about playing time.

“I have nothing but respect for coach,” Jackson said. “I don’t question anything he does. He’s in the Hall of Fame for a reason. … Coach Izzo pushed me hard every day and he instilled a lot in me and I’m just using that with what I’m doing now.”

Bridges said Jackson was asking him often what he should do. Should he stay in school or head to the NBA. Bridges told him to do what’s best for him, something Bridges is doing now, as well.

He’ll likely go later in the draft than his Spartan teammate, but he feels the extra year helped him heading into the NBA.

To that end, he’s dropped about 20 pounds and is playing at around 220, saying he feels more explosive. That will help in his individual workouts, as well as his versatility and ability to play multiple spots on the floor.

He knows he needs to keep working on his ball-handling and creating his own shot — that feedback has already come from some teams — but like Jackson, Bridges believes his two years with Izzo prepared him for this.

“Just that toughness and intensity you need to bring I feel like will really help me in the NBA,” Bridges said. “Not a lot of people have that in the NBA.”

Much of that came from his upbringing in Flint, also, and Bridges spoke of that on Thursday with a sense of pride, talking about how he’ll be able to change the lives of his mother and sister.

The combine was just the start of that. The draft comes next.

For both Jackson and Bridges, they’re lives are about to change. And they’ll likely both be doing it as lottery picks. But they know, too, there are no guarantees.

“This is the first step, making it to the NBA,” Bridges said. “But I want to be able to stay in the league.”