McAuliffe finished eighth in the 1952 Heisman Trophy balloting. He rushed for 531 yards and seven TDs that season. 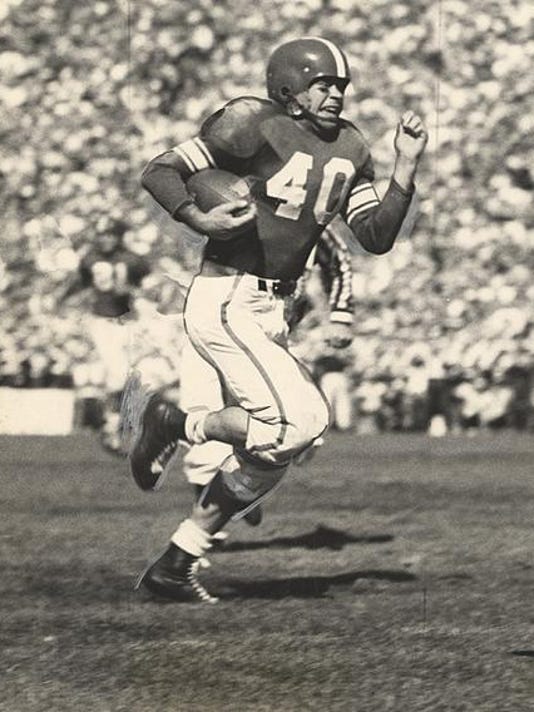 Former Michigan State running back Don McAuliffe, a fighter in his youth, battled to the very end.

The captain of Michigan State’s undefeated 1952 national championship team died Saturday in La Jolla, California, according to Kevin McAuliffe, his oldest son. He was 90.

McAuliffe finished eighth in the 1952 Heisman Trophy balloting. In nine games that season, he rushed for 531 yards and seven touchdowns. He also had 194 yards receiving and two more scores.

Kevin McAuliffe said his father, an accomplished Golden Gloves boxer, had fought off sickness for years — he was diagnosed with esophageal cancer 28 years ago and had bouts with prostate cancer, skin cancer and Alzheimer’s Disease.

“He never quit his entire life,” Tim McAuliffe, his middle son, said. “He didn’t know how to.”

In college, he kept good company — he was roommates with eventual college coaches Frank Kush and Chuck Fairbanks. He played in the 1952 East-West Shrine Game, where he played against Heisman winner Billy Vessels of Oklahoma. Kevin said his father played extra hard that day because he thought he was better than Vessels. McAuliffe’s East squad won 21-20.

Kevin said his father also played in the 1953 Chicago College All-Star Game, where his team of college seniors lost to the Detroit Lions.

McAuliffe was born and raised in Chicago, where he played high school football. The New York Giants drafted McAuliffe in 1950, but he never played in the NFL. Kevin said his father weighed 190 pounds in college — a big back for his era. According to the 1952 Shrine Game program, his nicknames were “Hopalong” and “McGoon.”

“He was like a big locomotive that dragged them to the national championship,” he said.

He was tough as a parent, too. Tim McAuliffe recalled intercepting a pass in a high school game and returning it for a touchdown. His celebration didn’t go over well with his hard-nosed father.

“He went over the fence, through the end zone, grabbed me by the facemask, twisted my head half off and said, ‘You ever pull a stunt like that again, you’re done. Next time you go in the end zone, act like you’ve been there before,’” he said.

Tim McAuliffe said his dad was strong-willed, yet he had a heart that made the sons the envy of the kids in the neighborhood.

“He was just a phenomenal dad to have,” Tim said.