Michigan State will be on the practice field for the first time Thursday, preparing for the 2018 season-opener at the end of the month.

Michigan State defensive end Kenny Willekes (48) had 14.5 tackles for loss last season. The Spartans will be seeking another edge rusher to stand out to complement the former walk-on.(Photo: John T. Greilick, Detroit News)

East Lansing — The players reported Wednesday and by Thursday morning, Michigan State will be on the practice field for the first time, preparing for the 2018 season-opener at the end of the month.

The optimism is high for the Spartans after completing a seven-game turnaround from 2016 to 2017, winning 10 games, coming in second in the Big Ten East and beating Washington State in the Holiday Bowl.

Nearly the entire starting lineup returns as Michigan State looks to validate the quick rebound from the misery of 2016 by pushing to win the East and get back to the conference championship game for the first time since 2015.

While there aren’t many position battles, that doesn’t mean there aren’t some questions to answer and story lines to follow over the next few weeks. As Michigan State gets set to kick off the season Aug. 31 against Utah State, here are some things to keep an eye on throughout preseason camp.

Breaking down the offensive line isn’t as exciting as talking about quarterbacks and receivers, but the Spartans are returning plenty of talent to a group that often goes eight deep under offensive line coach Mark Staten. Tackles Cole Chewins and Luke Campbell are back, as are interior linemen David Beedle, Kevin Jarvis and Tyler Higby along with Jordan Reid, a versatile sophomore who played mostly at tackle as a true freshman.

The big question is who replaces Brian Allen at center. The first shot will go to sophomore Matt Allen, Brian’s brother. But Higby and Reid also worked at center in the spring while Beedle has the ability to move to the middle as well. Other offensive linemen to pay attention to include sophomore AJ Arcuri, redshirt freshman Mustafa Khaleefah, redshirt freshman Matt Carrick and freshman James Ohonba.

There’s no doubt senior LJ Scott is the No. 1 running back, and he’ll likely get plenty of work as he attempts to lead the Spartans in rushing for the fourth straight season. Who might get the extra work in the backfield could be intriguing. 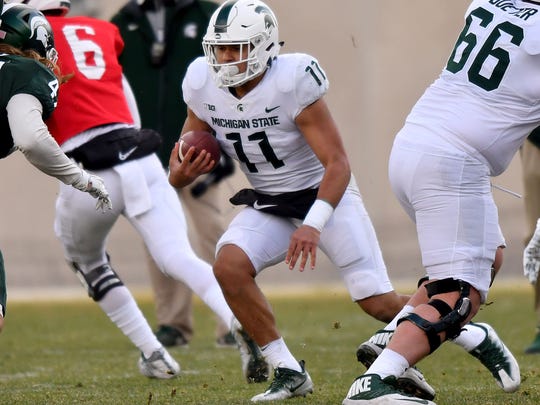 Sophomore Connor Heyward will, no doubt, see plenty of time in the backfield. However, his versatility will allow the Spartans to use him in several different roles. That could lead to opportunity for true freshmen Elijah Collins and La’Darius Jefferson, along with redshirt freshman Weston Bridges, who had most of his first year wiped out from injury.

They’ll all get a shot, but count on at least one of them to at least get a handful of carries.

The pass rush took a significant step in the right direction last season, but the Spartans are still hoping to increase the pressure on the quarterback this season. Junior end Kenny Willekes is coming off a breakout season, one in which he recorded 14.5 tackles for loss, including seven sacks. Finding a running mate on the other side will be critical this month.

Jacub Panasiuk played well as a true freshman last season, recording three tackles for loss in limited action. He’ll have plenty of company in pushing for playing time. Junior Justice Alexander had a good spring and could be ready to find a consistent role, while redshirt freshman Jack Camper has made the move from tight end and is completely healed from a foot injury. A group of true freshmen — Jacob Slade, Zach Slade and Parks Gissinger — should get a shot, while redshirt freshman DeAri Todd has played both end and tackle, and fifth-year senior Dillon Alexander played in 11 games last season. 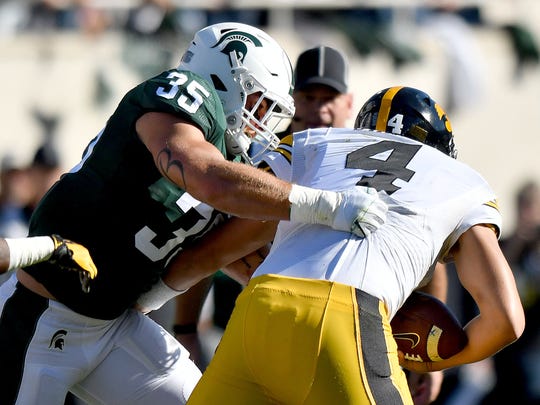 The Michigan State linebacking corps might be among the most talented in the Big Ten, but the likely starters were all out this spring with injury and it’s worth watching how they’re all coming along throughout camp while the depth continues to build.

Junior middle linebacker Joe Bachie (wrist), senior outside linebacker Andrew Dowell (thigh) and sophomore outside linebacker Antjuan Simmons (neck) all sat out this spring, but should be 100 percent at this point. In the meantime, fifth-year senior Byron Bullough has established himself is the primary backup in the middle while junior Tyriq Thompson will continue to push for a starting role on the outside. Sophomore Brandon Randle will also see time on the outside, while the biggest question is what sort of role will Jon Reschke settle into?

The sixth-year senior is back on the roster after leaving the team in early 2017 after directing a racial slur toward a former teammate. However, he’s been welcomed back by the current roster and the player who started in the College Football Playoffs will bring plenty of skill and experience.

The amount of quality depth in the secondary is almost unfair to some of the other teams in the Big Ten and will be a challenge for first-year defensive backs coach Paul Haynes to figure out the right combinations. Senior Khari Willis and junior David Dowell are back at safety, while junior Justin Layne and sophomore Josiah Scott man the corners.

But there are plenty of options from there. At safety, there’s experience with the likes of fifth-year senior Matt Morrissey and senior Grayson Miller, while Dominique Long expects to have a bigger role as a sophomore. Add in sophomore Tre Person and freshman Xavier Henderson, who stood out in the spring as an early enrollee, and the talent is there.

It’s the same on the outside as senior Tyson Smith and junior Josh Butler have starting experience, while freshman Kalon Gervin, another early enrollee, should get a shot to play. Where freshmen like Davion Williams, Michael Dowell and Chris Jackson fit in remains to be seen, but if they stand out the next few weeks, they’ll get a chance.